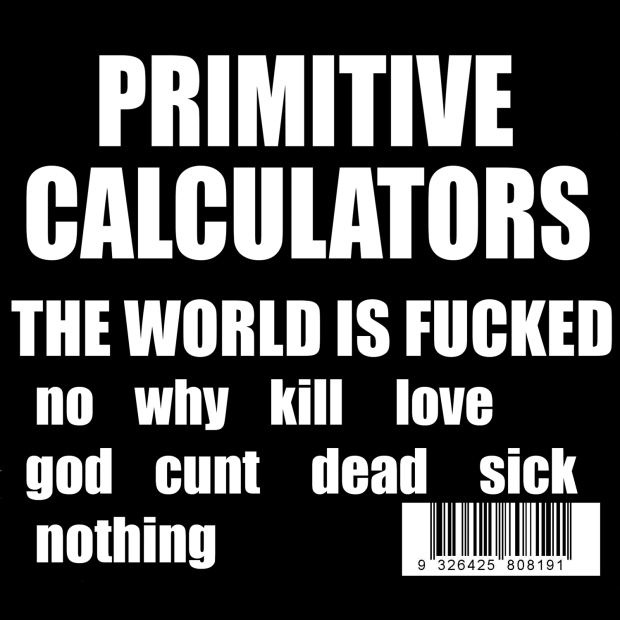 Primitive Calculators – The World Is Fucked

Synth-punk band Primitive Calculators founded Melbourne’s late 70s ‘little band’ scene – the burst of experimental post-punk happenings shown in the film Dogs In Space. Their 1978 debut was re-issued a decade ago but it was their invitation by Nick Cave & The Bad Seeds to play All Tomorrow’s Parties in 2009 that saw them reform and start recording again.

Thirty-five years on, Primitive Calculators remain scornful of quaint touches like harmony, melody, soulfulness, or dynamic. These nine songs are compact and no-frills; itching with buzzing, whirring and drilling sounds as though recorded using tools plucked gleaming from a dental autoclave.

Singer Stuart Grant barrels his way through songs that deviate little from each other stylistically, his brutish voice and blunt philosophies (“Why was I born? Why do I try? Why do I care? Why do I lie?”) backed by screechy guitars and a frantic drum machine. All that remains is to slap on some one-word track names like ‘No’, ‘Sick’ and ‘Dead’ and serve it up with all the ceremony of a lumpy spud side-dish splatted onto a plate at a truckstop diner.

Like an Australian black comedy, however, there is an artfulness to this record’s ostensible awfulness and, like such a film, your verdict on if it is bloody dreadful or bloody wonderful will hinge on if you happen to also find it bloody funny.