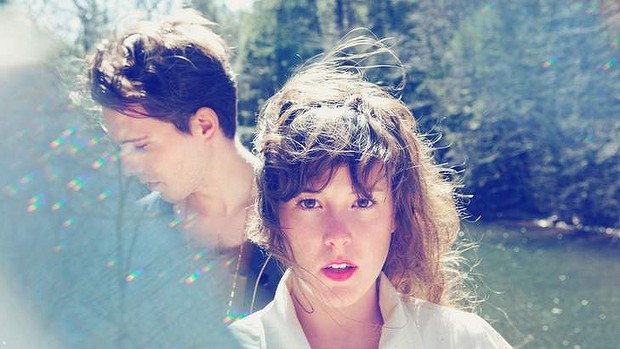 The sing-along that closes Purity Ring’s show is proof that if the topic is wrong but the melody is right, unexpected things will happen. Blissed out, hands in the air, phones finally tucked away, the crowd at the steamily sold-out gig is singing, en masse, about a sternum. Niche, no?

“Cut open my sternum and pull / My little ribs around you”. When sung by Purity Ring diva, Megan James, ‘Fineshrine’’s chorus is cute and creepy and cool, like Björk when she broke 20 years ago. When James is joined in her well-documented obsession with all things corporeal by a room full of twenty-something trainee fetishists, it’s one of those moments in pop when nothing, and everything, makes sense.

The Canadian duo’s debut record, Shrines, emerged in mid-2012. A shower of praise followed for its zeitgeist-tapping formula of synth-pop, underlaid by chopped-up R&B-influenced beats, dubstep-lite’s bottom-end shudder and James’ gleeful, girlish vocals. Admirably aware that electronic duos can be less than a spectacle, beats guy Corin Roddick built a light installation for touring to bring his on-stage mix to life.

The duo emerges at the school-night-unfriendly hour of 11pm, surrounded by (what look like) suspended paper mache cocoons pulsing colour from within. James occasionally strikes (what looks like) a suspended snare drum, which responds by glowing yellow, while Roddick occasionally solos on a ring of (what look like) small paper lanterns, which also glow. So transfixing is the radiant array, the audience hold a sea of camera phones aloft for most of the gig. Ironic, considering the point of the show is to bring immediacy to an experience that

would otherwise seem bereft of it.

Shrines’ songs are variations on the theme of Purity Ring’s sound. Read: they all sound the same. On record, this works well, but in a live setting, my frustration mounts. Every beat is sliced and diced; every synth line pulls back as soon as it pushes forward; every sound is dislocated just before it find its groove and I can’t help wishing Roddick would just let it ride. For besotted fans, however, Purity Ring’s show is true to their sound on record. Too true.