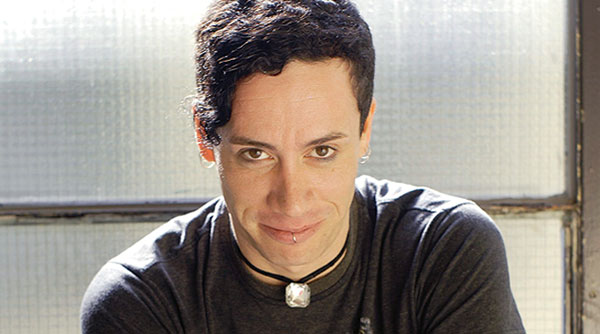 First published in The Brag, September 2009

Actors love to talk about the rigourous roles they select. But how many of them have played a wild desert coyote who wants to fuck, and then eat, a house cat? Welcome to the magic realist theatrical landscape of ‘References to Salvador Dali Make Me Hot’.

Playwright José Rivera is known best as the Academy Award Nominated screen writer of The Motorcycle Diaries. Written in 2000, References to Salvador Dali Make Me Hot, a co-production by Arts Radar and Griffin Independent, claims to be “a surreal romance about love and longing that explores the scars of war on those who fight it and those who are left behind”.

Set in the desert town of Barstow, California, a woman, Gabriela (Olivia Stambouliah), waits for her husband Benito (Stephen Multari) to return from his US army posting. When he arrives it transpires Benito wants to reignite their once fiery passion while Gabriela wants to rediscover the man she first loved.

Playing the role of lascivious coyote is iOTA, best known for his incredible vocal talents as a singer and songwriter. While iOTA has had success in critically acclaimed musicals such as Hedwig and the Angry Inch and The Rocky Horror Picture Show, this is his first role in pure theatre.

“Don’t come expecting a musical,” he warns. “It’s not a ‘big sing’ for me. The music is woven in to add atmosphere and tension, it’s not like we suddenly break into a showtune!”

References to Salvador Dali Make Me Hot ran in 2007 at Darlinghurst’s Tap Gallery. In 2008, the actors who played Gabriela and Benito – Stambouliah  and Multari – approached director Anthony Skuse, passionate about performing the play again.

“I thought it was a beautiful script,” says Skuse. “My initial thoughts were that some of it was like an opera libretto… it has that heightened, emotional quality and the images are very rich. I was hoping we’d get a composer involved to score the play but it didn’t transpire. So, we’ve had a wonderful musician working with us, Juan Carlos Rios, and we’ve taken a playful, improvisational approach to creating the music instead.”

“It’s not really set in reality; there are a lot of surreal things happening,” says iOTA.

“The coyote is trying to entice the cat (Taryn Brine) into the desert. She’s grown fat from domesticity and he’s saying ‘Come out and we’ll do the wild thing the way the wild animals do, do you remember what that’s like?’ It’s very flirtatious but the coyote is basically trying to fuck and then eat her. The coyote and the cat are metaphors for the two main characters.”

“There’s something about deserts and coyotes and cactuses and the moon that really attracted me. The role seemed really nice and the play seemed like something I’d be able to fit in with other stuff.”

Unlike his experience with Hedwig and the Angry Inch in 2006. Hedwig kicked off at the Clarendon in Katoomba, did a month in Newtown, a month in Melbourne and then six weeks back in Sydney again.

“I am glad I didn’t know what I was in for or I wouldn’t have done it!” says iOTA.

“It was intense, overwhelming and incredible. It was really hard physically and mentally. I was asked to do it again but the thought of that makes me want to cry. I wanted to get into an area of theatre where I didn’t have to burst into song.”