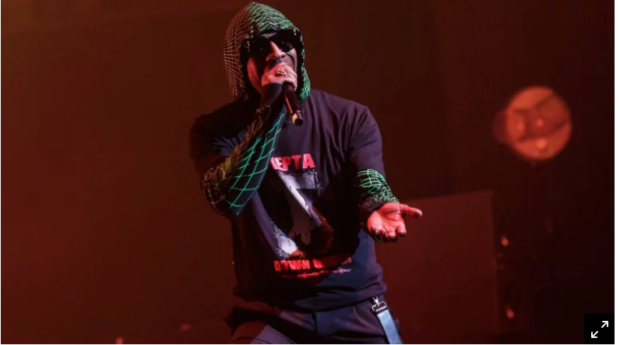 In 2016, grime artist Skepta knocked a guy’s teeth out in a Melbourne club. Later that year he won prestigious British music award the Mercury Prize for his album Konnichiwa, which featured a song about the altercation called Crime Riddim. Skepta’s criminal record saw his visa denied in April. It was cleared two weeks ago, allowing him to play a Sydney Opera House show during which there was no Opera House: there was only Skepta.

“I’m not gonna lie, I’m gassed right now,” he says amid bass that blasts a room just vacated by the elderly punters of the symphony orchestra.

Crucially, you believe him. Big hip-hop shows are surprisingly hard to make surprisingly good with most MCs opting for the confected, shouty hype in history’s easy reach that gets more from the crowd than it gives.

This show’s magic is in the equilibrium of energy between stage and stalls. With “energy” being a euphemism for “utterly bananas”. Not even the nosebleeds at this sold-out gig need even a second to warm up after he bounds out in a “Skepta Down Under” t-shirt pulled over a hoodie, announcing, “I’m your fitness instructor right now!”

It’s a show full of humour – including DJ Maximum bookending songs with an air horn or smashing-glass sample. Hell, he’ll even drop one mid-song.

DJ Maximum messes De La Soul-style with Skepta and his main sparring partner, Shortie, hitting pause when they’re mid-flow so they have to re-start. “This time, I need everyone into this – including security,” Skepta says before the bedlam of Shutdown.

When A$AP Rocky sprints on to guest on Praise The Lord (Da Shine) the contrast is stark. Where Rocky tramples the song’s sweet tropical loop by shouting into the mic, Skepta’s rapid-fire rap gets excited but never let off the leash.

In 2016, Skepta was still chest-thumping. “How many more MCs do I kill/’Till they realise there’s nobody above me?” he asks on Konnichiwa. Two years on, his charisma and skill are so apparent, it seems silly he’d still waste time stating it.

“Let’s get grimey​” is a statement he could repeat all night, however, and in that nonchalant London accent it would still be a thrill. Just three words yet such a neat narration of exactly what’s happened to British music with Skepta as a major player.

A post-show message to media states, “Skepta is the first grime artist to perform at the Sydney Opera House”. It was more conquest than performance, but let’s not quibble. Let’s just hope he’s the first but not the last.