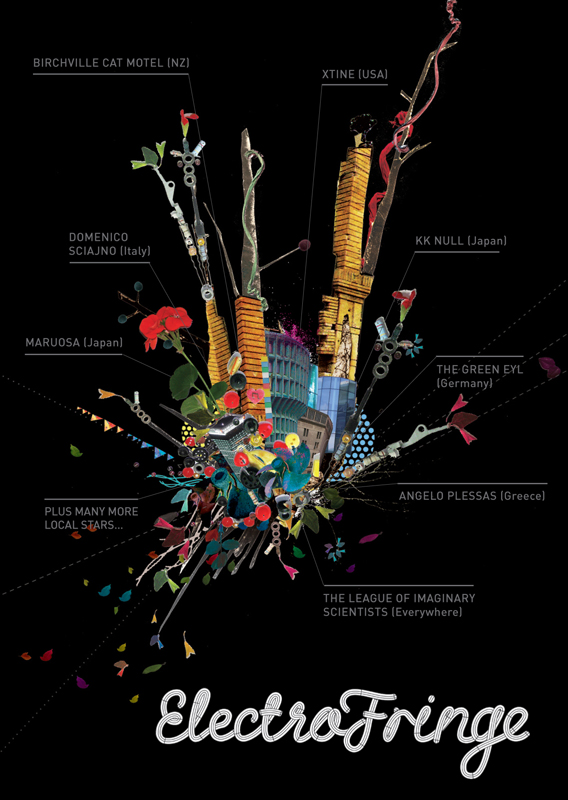 Electrofringe 2008 kicks off with an event encouraging participants to banish their inner conservative. Fitting for a festival that pummels its audience with 80 weird, wonderful and wired events over five days and nights.

Hands up those who have attended a workshop on animatronic penis masks. How about a gig where the musician boasts of playing hideous, brain-destroying noise? Ever roamed a gallery being attacked by a swarm of digital rats? Dropped in on a chamber recital for robots?

Held in Newcastle from October 2- 6 as part of This Is Not Art, Electrofringe has gathered international and Australian performers, musicians and artists in Newcastle for 11 years. Its reputation has grown largely through word-of-mouth and a unique program of events centered on electronic arts and culture. Electrofringe’s ethos of skills exchange between established and emerging artists requests that festival artists share their skills or artistic process through workshops and presentations.

But it’s BYO open mind at workshops on everything from soldering to software to solar power. Lads who swagger in to learn soldering will need to swagger back out again, because the workshop is an all-girls affair that teaches soldering fundamentals using modified feminist theory. The workshop on wind power teaches participants how to make windmills for guerilla-style public art, while Adelaide duo, Hidden Village, re-invent obsolete video game systems for artmaking and sound performance. Peruse the program a couple of times and you start to realise why Electrofringe 2007’s tagline was: Make it yourself: break it yourself: void your warranty.

Alex White is a youth worker by day and a devoted Electrofringe director at every other graspable opportunity. 2008 is White’s second year at the helm, this time with two new directors, Somaya Langley and Elmar Trefz.

“The directorship is soul-destroying and heart-breaking but it’s also the most exciting thing I have ever undertaken,” says White. “A one-year stint was never an option. You sign off on two years upon pain of death.”

White’s connection with Electrofringe was established in 2004 when he presented his own work at the festival – feedback hardware with oscillators and the biggest knob anyone had every seen (he recalls proudly).

“It was first time I’d shown my work outside a university or a squatted warehouse. Electrofringe has been a mentor of sorts for me, so I may still owe it more than it owes me – but only by a very thin margin!”

All events at This Is Not Art are free, except for the gigs at Newcastle’s Cambridge Hotel on Friday and Saturday night, co-presented with the Sound Summit festival. The gigs, ($12 presale), feature acts including Naked OnThe Vague, Mt Eerie /Microphones, Pikelet, experimental multi-instrumentalist KK NULL and elongated harshcore musician Maruosa. Gigs are also planned for opening night on Thursday featuring My Disco and The Splinter Orchestra, and for closing night on Sunday, featuring noise artists Pig&Machine, presseject, Gooey on the Inside, and more.

“The Electrofringe line-up is known for its diversity and the sheer noise exuded,” says White. “There aren’t many other opportunities in Australia to see a bunch of international and local sound art / noise acts going to town on a decent PA.

“By Saturday night everyone is so excited, tired and inebriated that things generally fall apart a little. Last year a punter demanded that Leafcutter John play something he could dance to. Leafcutter obliged by insisting the guy join him for a waltz on stage and then forced him to play drums for the rest of the set.

“As a director, you can’t dream up moments like that and it feels almost magical to sit back and watch it unfold. Like the most enchanting of train crashes.”

Hard-pressed to choose the event he is anticipating the most, White settles on the Electro-Performance evening on Saturday night. “It’s a dance/video work by the amazing Alison Currie, plus a brain-controlled musical instrument and a work called ‘Finding Aurora’ by The League of Imaginary Scientists from Europe. It’s going to be amazing and beautiful.

“That said, I think the true beauty of Electrofringe is not one of design or curation but in the interaction and adventures that happen between everyone who is there.”