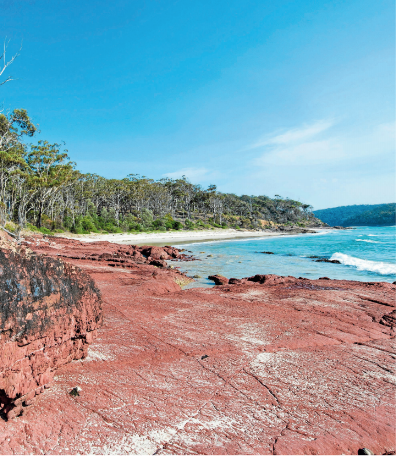 It’s foolishly late to be fuelled by coffee and cortisol, bumping down a dirt road in a national park full of suicidal marsupials. An owl glares at us from a bough. Strange things are happening in the trees. Eucalypts wreathed in regrowth is nothing new but a charred stump covered with clusters of white blossoms? We stop to look at it and hear the ocean booming in the darkness ahead. Something multi-legged creeps along the headlights’ fringes: A tarantula? A crab? 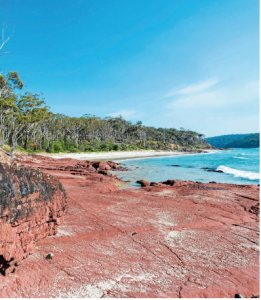 The Green Cape area of Ben Boyd National Park is the same driving time from Sydney and Melbourne – about six hours and 45 minutes. Sydney-siders don’t typically come this far south for beach holidays though. My family’s special spot was near Lake Conjola in the Shoalhaven shire, a sweet coastal hamlet where fire destroyed 89 homes on New Year’s Eve 2019. It burnt fiercely here on Thaua Country, Yuin nation, too. Green Cape is just two peninsulas north of Mallacoota, in Victoria, where residents escaped the inferno on December 31 by fleeing to the beach, later to be rescued by a navy ship.

Come next fire season, thanks to pressure from Aboriginal leaders, Ben Boyd National Park may have a different name, with the NSW National Parks and Wildlife Service (NPWS) due to decide soon. Ben Boyd was a failed Scottish entrepreneur who forced South Pacific Islander men to work for him in the 1840s, a practice experienced as slavery but euphemised as ‘blackbirding’. Monaroo Elder BJ Cruse told National Indigenous TV (NITV) in May: “Ben Boyd, in historical European documents, categorised Aboriginal people as vermin. To have the national park re-named with an Aboriginal name pays respect to our people and gives [them] a stronger sense of belonging.”

The road ends at the remote Green Cape lighthouse. It’s quite a sight, silhouetted against the Milky Way with sea mist shrouding the dome. The waves pound so hard on the cliff they seem to make the whole cape shake. A southern brown bandicoot darts by, an endangered species that is making a comeback here due to the park’s intensive fox control program. We’re staying at the Telegraph Station bunkhouse, a heritage cottage that foreshadowed the tiny house trend by 140 years, and the budget alternative to the lightkeeper’s house next door. Both accommodations are run by NPWS giving the whole scene an agreeably spartan edge. If you want a glass of chilled bubbly, fine, bring it yourself.

The ranger pops up the next morning. He’s from Cobargo, another town that made headlines during the black summer when locals refused to shake Prime Minister Scott Morrison’s hand in January 2020. The fires at Ben Boyd weren’t as intense as elsewhere, he says. “When they get burnt, certain gums will sprout from lignotubers at the base but around Cobargo the gums were killed outright,” he says. “It was so incredibly hot that it incinerated carbon in the soil and killed the seed bank in the top layer. When you don’t have organic matter in the soil, or living tissues with sap, insects, beetles, all that stuff, there’s nothing to kickstart things. It will come back eventually but up there we’re in this totally reset ecosystem that is, in places, starting from scratch.”

Ben Boyd is best known for its 30 kilometre Light to Light coastal track. You can walk it all as a multi-day camping hike or do relaxed day trips, stopping for swims. We do the latter. Walking from Bittangabee Bay, where tea tree, banksia and sheoak once dominated, we find ourselves parting head-high fields of a vivid green plant called kangaroo apple. Squint your eyes and you could be in a marijuana plantation or a humid Thai jungle. “We call them ‘first coloniser’ or ‘pioneer’ plants,” a ranger tells me later. “Their role is to regenerate quickly and put nutrients back into the soil so that other plants can follow.”

Thank goodness for the fire-retardant rocks! “These rocks are 360 million years old, deposited by great rivers flowing through this area from the northwest, with their origins somewhere in the central Australian mountains,” says geologist Anne Felton. That explains why they’re the colour of Uluru. Walk further to Hegarty’s Bay and they diversify into purple, magenta, mustard, mauve, rust, dusty pink and nether-regions of the colour wheel with no name at all. Multicoloured boulders are piled up everywhere you turn, draped with party-streamer pops of kelp and crayweed. Where the tannin-tinted river runs into the sea, the waves wash back with orange froth. It looks like a set for one of Star Trek’s strange new worlds.

The next day we walk 13 kilometres from Boyd’s Tower to Saltwater campground. Most of the knockout coastal views are seen through a foreground of blackened trees. Meanwhile, the burnt zones creep down the cliffs; the fire must have licked the breakers. With no other walkers around, we skinnydip at idyllic Mowarry Beach and dry off in the sun. Behind us, thickets of melaleuca sway in the breeze, their dried-out tips creaking and murmuring. And when we knock our boots together at the end of the day, chunks of charcoal fall out.

Back at Green Cape, a group of jovial South Africans have moved into the lightkeeper’s house. I tell them of the fire damage. “Really?” one says. “We thought it had all recovered by now with all the rain.” That’s a bit hopeful, I suggest. “But the pink flannel flower in the Blue Mountains has done really well,” he replies. “Did you not hear about that?”

The next day we drive into Eden to do the Bundian Way story trail, a gentle interpretive walk from Cocora Beach to Quarantine Bay that passes through a Bunang Ring (ceremonial performance place). Eventually, the Eden Local Aboriginal Land Council wants to develop the full 265 kilometre trail all the way to present-day Kosciuszko National Park. “The Bundian Way is an ancient pathway for Aboriginal people from Yuin, Ngarigo, Jaitmathang, Bidawal Country that provided safe passage between the coast and the high country,” it writes on its website. “Travel along the pathway allowed different tribal groups to gather on the shores of Turemulerrer (Twofold Bay) during the spring whale migration and ceremonial places near Targangal (Mount Kosciuszko) for the Bogong gatherings in summer.”

Over at Eden Killer Whale Museum you’ll learn about the region’s whaling history, and the rare hunting partnership between animals and humans where, between 1840 and 1930, orcas helped to herd baleen whales into Twofold Bay to be slaughtered. A few blocks away, on the whale dreaming trail, you’ll learn this was, of course, an Aboriginal hunting practice long before, as was offering the Beowas (killer whales) the tongue and the lips of the Jaandas (baleen whales). For the Katungal people, Beowas were ancestors, helping them to hunt. And the Bundian Way is not merely a tourism proposition to capture the keen bushwalking market but an ancient Dreaming songline. “Sometimes [The Bundian Way] is an established trail, sometimes a minor country road,” writes the Council, “But always it is there. Always the Bundian Way, waiting to safely show people a route between the sea and the mountains”.