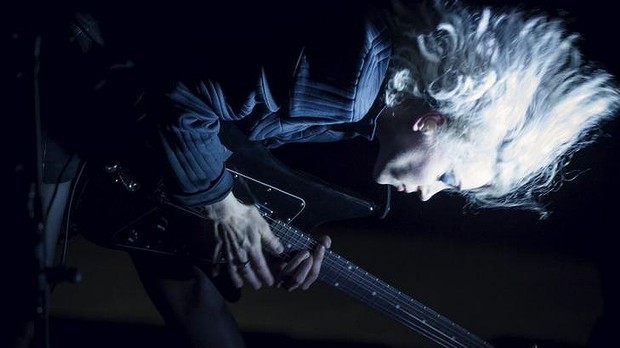 The stage is dark but we can just see St Vincent (Annie Clark) reach for water and take a swig. Thirty minutes into a show that hasn’t deviated from its stark choreography, her action is a shock. “She’s real?” we marvel. “She needs water to survive? Just like a regular human?”

Clark’s otherworldliness is such that even offstage she resembles a rare, pale and perfect insect on whose body secret antennae may be harboured. “I’d like to extend a special welcome to the others, freaks and weirdos here,” she says with the dramatic pacing of an actress delivering a career-defining monologue. Her poise is extraordinary.

This Vivid Festival show is touring Clark’s fifth album, St Vincent, however the singer, songwriter and bombastic guitar shredder is known best for her 2012 record with fellow New Yorker, David Byrne, Love This Giant. Indeed, the duo’s herky-jerky marionette-gone-rogue dancing is central to Clark’s solo routine too. Her blazer, with its sharply angled centurion shoulders, could be a nod to Byrne’s iconic oversized suits, or could equally be a hat tip to Grace Jones’ imperious androgyny.

Clark’s show follows in the fiercely pretentious lineage of New York City art-rockers with Laurie Anderson’s creepily endearing insights evoked in her spoken word passages. The lights flash in strobes and jolts, snapping into blackness at each song’s end so Clark can catch her breath, take hold of a freshly-tuned guitar, or tug her leather mini-skirt into place – prosaic fine-tunings that, if illuminated, would break the show’s spell.

Clark’s voice is high and fine and her three-piece band is poised and tight but those achievements are secondary to what really fascinates. Like Clark’s solos, her wraith-thin body folded over her guitar, jerking and demented, her shock of white hair haloing out as the only soft thing to see and hear; yet the perfunctory nature of her passion making a mockery of the guitar show-ponying we’ve seen so many men enact.

Like her signature move, a kind of sideways skitter on high-heeled booties that could be the lotus gait of an Imperial Chinese girl whose feet are bound; a motion that explores bodily control and lack of it, a theme present in most of Clark’s modern dance tonight.

The most startling moment is when Clark ascends a podium to sing the call-to-arms of ‘Cheerleader’ (“I don’t wanna be your cheerleader no more / I don’t wanna be a dirt eater no more”) and ‘Prince Johnny’ (“Remember the time we snorted / That piece of the Berlin Wall you’d extorted”), after which she collapses to prostrate then oozes in slow motion down the stairs, draped horizontally, a vision of a woman debased yet in total control.