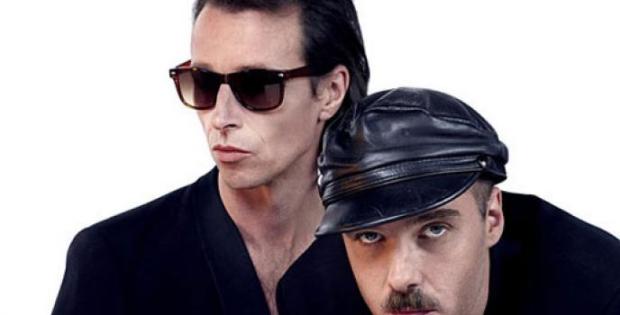 Liking a record, or not, should be simple. But often it isn’t. Do you love it … or is it just nostalgia? Were you left cold because you weren’t in the right mood? … didn’t listen enough? … weren’t informed? Live music, however, releases you from the second-guessing. Like sex, it’s inarguable: it turns you on, or it doesn’t, then and there. Questioning that is pointless.

Melbourne duo Standish/Carlyon remind me of both of these maxims. Their record Deleted Scenes comes with complications piling up in the drifts. You like it but it’s sly: gratification blurs into irony; pleasure into paranoia. It’s easy listening that’s hard to get close to and you don’t want to get caught out assigning feelings from the heart to songs from the head. Which bits are genuine? Which bits are referential? Or are all bits both all the time?

Live, the experience shifts from cerebral to sensory. It’s impossible to think when you’re swamped by such beautiful sounds – finessed, deepened and amplified in their live incarnation. Four months after the release of Deleted Scenes, Standish/Carlyon “launch” their album to a Sydney crowd who’ve likely owned the record for months. Guitarist and effects guy Tom Carlyon stands sideways to the crowd facing a table laden with pedals. There are no laptops. He is attractively gaunt and has a guitar slung across his back in a manner that’s part utilitarian, part plain fucking cool. He looks like a guy who’s done this a million times and afterwards he’ll just smoke a cigarette.

Everything about singer and bass player Conrad Standish, meanwhile, right down to his detached air, seems meticulously cultivated. Singlet, black leather cap, Chaplin moustache and suggestive Sanpaku eyes. If he burst out of a cake there’d be equally thrilled squeals at a hen’s night or at a gay man’s 40th. I’m appreciative too.

When songs end, bubbles burst. Maybe that’s why Standish/Carlyon don’t end them. Instead, they transition between tracks with noise, so, while everything feels smooth, our attention is in a headlock grip. I’m sure more bands would craft transitions too if they didn’t sound clumsy when they tried. There’s skill involved in making it all so dreamily seamless.

Standish/Carlyon soundscapes are some of the best I’ve heard: densely billowing and vaporous, or pulsing imperceptibly with dub’s retreating echoes. Their sounds are as rich as any luxuriant-white-noise specialist but, here, it’s couched amid generous dollops of saccharine pleasure – like Standish’s falsetto – in contrast to the dearth of gratuitousness at sound art gigs.

Like HTRK, Standish/Carlyon have perfected the art of energy depletion. During ‘Critics Multiply’ a guy dances with his elbows bent, hands moving in fists at shoulder-height. Next time I look his arms are slack by his side – though he looks more in the moment for it. A woman in an 80s orange power suit joins him up the front to gyrate with some boys, an easy visual riposte to the band’s New Romantic allusions. “Polaroids float in the pool.”

Live, Deleted Scenes’ songs seem longer, elongated like taffy, ebbing in and out of clouds of sound. A kind of heavenly fatigue descends; a glorious oppressiveness. Thus, during ‘Gucci Mountain’, which Standish introduces as a “terse psychological drama about a private detective with narcolepsy”, when he snaps his bass string, I jump, alerted to how lost I am.

Now, I don’t remember where I was. I just know I want to go there again.