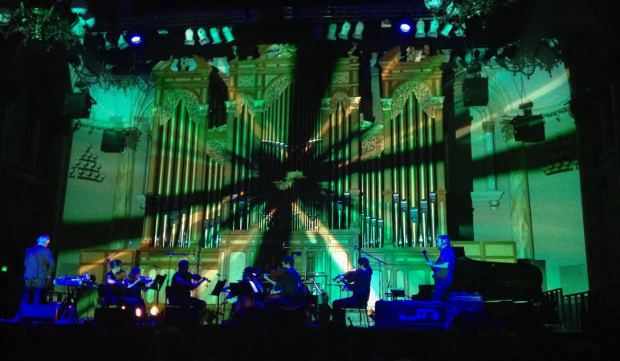 Stars Of The Lid (Unsound Adelaide)

Assuming all Stars Of The Lid’s moving parts are oiled and in good working order (elegant venue, exceptional acoustics, interesting surface for projections and a worship-y crowd) the trio (third member being visual designer Luke Savisky) could only disappoint their long-term fans if they did something in maniacally poor taste. Like tell a racist joke.  Or fart into a microphone. None of these things happen of course. The show goes through all the glorious motions: peaceful, graceful and occasionally soaring into unutterable sadness.

Good: I’m not up for any surprises. Earlier, Brian McBride tells me Stars Of The Lid “work around” the unanticipated timings of the string sections they play with live. Jed Kurzel tells me musicians should be “hanging on for dear life” and Trent Reznor says his current show is “much less rehearsed”. I nod and secretly hope no spontaneity is planned for Stars Of The Lid tonight because, really, I’d rather it progressed with all the impervious cosmic predictability of Titan orbiting Saturn. 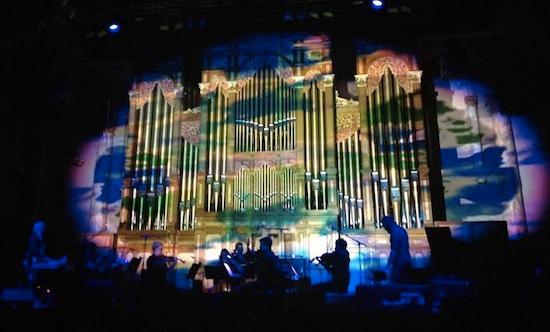 The spectacle is stunning. “I told them to take the screen down,” Savisky tells me later. Thus, his visuals are projected on the pipe organ that looms heavenwards behind the Town Hall stage, its golden spears mottled by a glide of seashine-y light. The eight-piece string section sits serenely between Adam Wiltzie stage right and McBride stage left and, just as you would hope, the first sound is the violinists drawing their bows in one long slow motion, the sustain of which is submersed into the band’s trademark celestial drone.

Posturing is important. Apropos of little, Wiltzie will strike what looks like a power chord but what sounds like nothing at all. For about 30 seconds he plays a grand piano that probably cost Adelaide Festival the equivalent of a teacher’s annual salary to source and lug in here. Perhaps he plays it for 60 seconds, maybe two minutes – five? Stars Of The Lid make clocking time blissfully yet bloody difficult, as what might otherwise be short moments go on oh so long. There is an actual crescendo – all sawing elbows and bows in angular disarray – that blossoms into the safest, softest explosion of volume I’ve heard.

The audience, however, is split. 98% here are misty-eyed putty in the band’s hands but 2% are (two) wretchedly drunk blokes up the back who hate the band, refuse to be graciously won over and don’t know how loud their derisive whispers are, or that a rage is at first simmering and then boiling over in a guy nearby who suddenly turns, stands and booms at them: “Why don’t you two go outside and suck each other’s cocks?”

Oh, for an exit survey of the Stars Of The Lid fans ejected from their extraterrestrial reveries by that horrid exchange. Fortunately, the only thing heard down my end of town (Hall) are the creaks and cotton-y slidings of people trying to recline another millimetre or two in their straight-backed chairs. Stars Of The Lid may claim they are not “heroes of the drowsy” but, in fact, they are exactly that, yet it is all glory and no shame to command music so powerfully soporific. 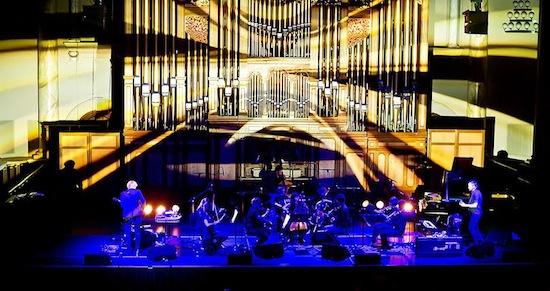