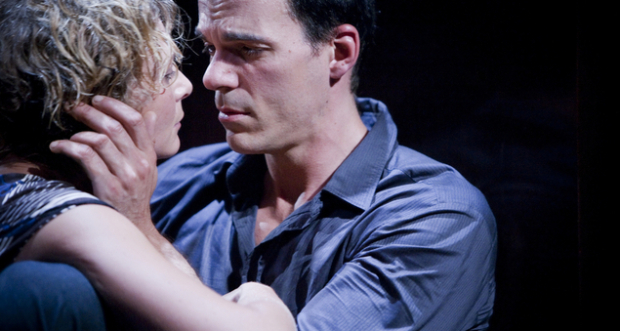 First published in The Brag, March 2010

When Stockholm begins, Spring is arriving. There are tightly curled green buds and a breeze drenched in warm, new air. There is hope. Todd (Socratis Otto) and his lover Kali (Leeanna Walsman) return together to their stylish apartment. Intoxicated by their perfect arthouse lifestyle, their flamboyant love and their sense of self, Todd and Kali are what an unimpressed tradie might call “yuppie wankers”.

Kali is seductive, but a handful: flirting, feigning Swedish descent, demanding slow-dances around the kitchen. Todd humours her, seemingly finding it all quite a hoot. It’s his birthday and they’re very happy. Free. Both trying a little too hard; fraying. Kali borrows Todd’s phone and a sick yellow light sputters from the fridge where, unobserved, the champagne has multiplied into 20 bottles from one, cancerously. Beneath the surface, something short-circuits.

Kali and Todd dip in and out of third person exposition – “they love arthouse movies”, Todd tells the audience. “She opens his favourite champagne” says Kali – a technique that distances them from the unfolding ugliness. In sequences that verge on horror-film-cinematic, Laura Hopkins’ set entwines with the script and begins to prey on the couple’s darkest premonitions, plunging them into a wintery place where they are wracked by jealousy and doubt.

Stockholm merges Bryony Lavery’s claustrophobic script with Frantic Assembly’s trademark blend of movement, music and offbeat treatment. It’s a visceral combination. And while the theatrical methods used in Stockholm may be new, its themes are as old as a common beach pebble, worn smooth by generations of wondering: If you saw your future, would you take the same path?