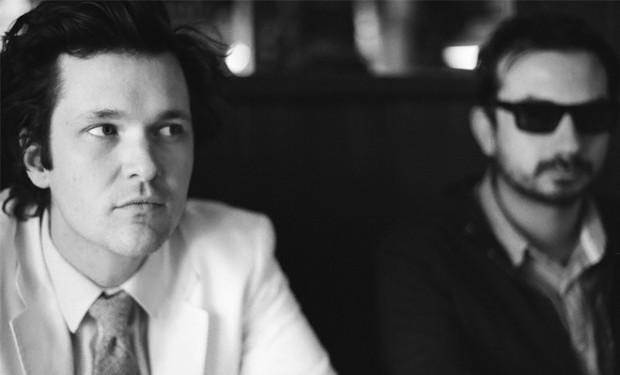 I am out on a limb. Way out, in fact, head in foliage. I’m convinced I’ve divined the source of Ned Collette’s inspiration for the first song, ‘Il Futuro Fantastico’, on his new record, 2.

When I call Ned in his Berlin apartment, the album is still a couple of weeks from being released. Had I been the type who scours the internet for other people’s interpretations (I’m not), no insight could have been gleaned on the song’s meaning. It’s too new. This is one of the pleasures of being a music writer. We hear music fresh and three-dimensional, when the meat of it still throbs perceptibly with its original muse; before the weight of the world and the written word bears down and flattens it onto a page.

It’s mid-morning in Berlin, springtime, and Ned’s drinking tea. It’s 7pm in Sydney, dark and wretchedly cold, and I’m drinking vodka. I’m aware my theory is singular, teetering on wacky. But hours of listening to ‘Il Futuro Fantastico’ on repeat, endevouring to crack its code – a song as steely, cold and resolute as the action of a pistol – has left me in a state where conjecture slides all too easily into conviction. The entire album has me in its thrall. I’m well past the flushes of first love and several blocks down fascination street.

I try to dispense with early formalities so I can confirm my theory. This isn’t easy. After each of my unremarkable questions Ned pauses before delivering an answer that’s split delicately between head and heart. It’s clear he wants to be understood, not approximated, so my gut response is to really listen. We talk about the delineated seasons in Berlin – “I like the transition seasons, Autumn and Spring” – about his respect for Wirewalker Joe Talia’s many talents – “Joe can play anything but he doesn’t, that’s totally part of his proficiency” – and about his thoughts on writing lyrics – “I need to feel they’re past a certain level that just anyone could write”.

Which leads us to ‘Il Futuro Fantastico’.

“So.” I take a fortifying gulp of vodka and soda. The theory has become dear to me and as I approach the precipice where it either flies or falls off I think I’d probably rather keep it to myself. But it’s too late.

And that is that. Only, it’s not. That same day, I had submitted a review for a print publication asserting: [On ‘Il Futuro Fantastico’] Collette mines the zone where neurosis topples into psychosis with lyrics documenting the internal pep talk of a protagonist wracked by indecision that only T.S Eliot’s anti-hero J. Alfred Prufrock could rival.

The wheels of print spin early and there’s no opportunity for me to retract it. Not that I’d need to. In my review, fortunately, I didn’t express my now erstwhile conviction that the entire song was founded on the existential hand-wringing of J. Alfred Prufrock. Besides, Ned seems quite taken with the idea. I tell him more about the poem and he resolves to dig it up and read it that very day.

“It’s interesting that there are universal themes and emotions,” he muses.

“Mmmm,” I reply, still mourning Prufrock’s loss. Back in high school, Eliot’s stream of consciousness masterpiece had been my first girly inkling of big, bewildering things like mortality, sexual repression, emasculation and social alienation. I had enjoyed revisiting it.

“One of my favourite stories is a Kafka story called ‘The Burrow’,” continues Ned, “There’s a mole that lives underground and the whole story is just him re-fortifying his hole – or whatever it’s called, his den? – in a completely obsessive manner because he’s determined the outside world isn’t going to come in and get him. I guess that’s a common theme, particularly for our era.”

So. Is the real story behind ‘Il Futuro Fantastico’ Prufrockian? Or Kafka-esque? You be the judge. Your guess is as good as mine.

When I moved to Berlin I somehow managed to get myself accompanied by Adam Donovan from Augie March and Shepparton. We spent a few frantic weeks trying to find an apartment, but due mostly I suspect to Dono’s general appearance, no one was interested in putting us in charge of their property. When we did finally land one it was pretty much by the extreme coincidence that his ex knew someone in the building.

Anyway the day we moved in the three of us (Joe Talia was here too) let ourselves in, and the first thing I found in the flat was a gun. There was literally a big bloody gun in the cupboard. So there’s the first line. God knows how you’d use a gun like that, it was gigantic. It’s gone now. A Greek man came and took it away.

Life with Dono was a daily struggle against the forces of collapse-theory and militant atheism. That is, Dono engages and believes in vast tracts of internet research proving that we will all be fighting tooth and nail over an old potato on the street by the year 2020 or something. Me, well I figure we’ve done it before, we’ll do it again. I’m quite upbeat about it really. I also have no problem with atheism, I just wish they’d all shut up about it and talk about something more interesting. Like something, as opposed to essentially talking about nothing, or god and how he doesn’t exist, which is like talking about nothing. First year uni alert.

Still it obviously rubbed off because I started picturing these wild, godless, society-collapsing scenarios in my actual building. It was a device to write a song about hopelessness, which I find very interesting and freeing. So the stairs were crumbling, the building was infested, the streets were raging and everything was futile but in the end I always find that idea quite comforting. Pure laziness probably.

And of course that was all a little tied into discussions I’d been having about Berlin and what people went through here after the Nazis built up then destroyed and demoralised a generation or two, along with the city itself. What the immediate aftermath of the war would have been like for people still living here, as Russian troops came through with orders to rape everything that moved. They say if you were a woman living on the third floor or higher you were relatively safe as they simply could not be bothered going up that far … plenty of pickings, y’know. And yes, a response to what was done to their civilians on the Eastern front. But my girlfriend lives on the second floor. It’s heavy.

So it’s hard not to imagine all these scenarios as you sit here wondering what to write about. But it’s not really that site specific for me, they’re all just jumping off points, and once I got going I think I probably just spurted it out and tidied it up a bit later. Actually, looking at the original verses now it seems it came out very tidily to begin with: a few one-off word changes and a date, 6/8/10, so I must have been happy with it straight out because I never date things unless I think they’re finished.

“There was literally a big bloody gun in the cupboard.”

I can’t remember if the words came before or after I had the basic musical ideas recorded, but I remember the music came together really quickly too. I think I woke up in the middle of the night and had that rhythm stuck in my head, probably from Omar Souleyman or some Turk driving down the street around here, and I knew I wanted to couple it with a very basic droning synth, something like Robert Wyatt or Melbourne’s great ninetynine might have done. The track is basically the drums and that synth, all the rest is the vocal and decoration. I originally thought the three squiggly guitar lines at the end of each verse were entirely fucking stupid – like a lame version of Prime Time – but often when I think something is stupid other people just don’t share the joke and eventually it starts sounding normal to me, like it was always there. So that was that – Joe liked it and added all that chaotic tape nonsense at the end, over my pristine and sophisticated harmonic development. What a …