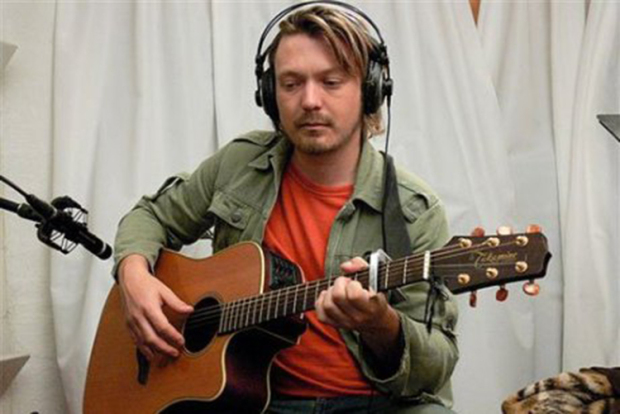 A ’65 Jazzmaster, a Joe Strummer song and love letter to an old friend – Brendon Humphries from The Kill Devil Hills talks to KATE HENNESSY about the genesis of ‘Words From Robin To Batman’, the emotional centerpiece of new LP ‘Man, You Should Explode’.

A friend once told me, “If someone gives you one good reason for something, it’s probably true. If they give you five or six, they’re hiding something.”

In a less stark way I’m reminded of this principle when discussing the genesis of ‘Words from Robin to Batman’ with The Kill Devil Hills vocalist and songwriter Brendon Humphries. He cites so many influences and inspirations that I begin to wonder what the one, true reason for the song is. What is he hiding?

How was it we met? Drunk by the river/We were children then, boys needing brothers

It is, as it turns out, about friendship lost. “It’s about a lost point in time or a stage in my life,” says Humphries, eventually. “I was thinking about some friends, and some long-time distance between us. I was missing certain people a lot.”

In some way, the lyrics are irrelevant. The song is a ballad. It’s sentimental. There’s pain, tenderness, regret, nostalgia and envy – all entirely translatable from Humphries’ delivery alone. An Arabic speaker could divine it. An extra-terrestrial. Someone’s sensitive pet.

But the lyrics fascinate too. Written as a letter, ‘Words from Robin to Batman’ part-chronicles a friendship, years after the fact. It reads like a weight lifted, like a letter penned to lessen the load of what one could never say in person. On one hand, that this letter made it to the album is a blessing. But Humphries is unprepared to lay his cards clean on the table. The “letter” requires decoding; its vulnerability is censored by metaphor. Enter Batman and Robin.

I’ve seen your sign raised in the sky/The city begs for extra mercy/Another joke, another ransom/Unleashes you on emergency.

“The image of Batman standing alone on a rooftop came to me, with his sign flashing around the sky and his sense of having to rescue everyone from some terrible thing all the time and the enormous responsibility of that. It’s a really heavy load to carry. Some people take the weight of the world on their shoulders,” he says.

And I’ve seen the horror of your task/How you must see us as a virus/And the steel comes to your iris/You drift into the mask, in mockery of Lazurus.

Brendon Humphries on ‘Words from Robin to Batman’

The song started by way of getting kind of upset and concerned for a certain old friend I felt was going down a pretty heavy path. There was a kind of bleakness there that I wanted to speak to, address, perhaps reassure, without being able to directly speak to them.

At that time, I had consciously laid my guitar to rest for a while to focus on the writing, the lyricism itself. As I guess all (song) writers do occasionally, you try something different; push the wheel from the rut. So, I was working on songs more as standalone poems, something I’ve always admired and something that’s often sorely overlooked in the fashionista catch cries of so much popular music.

I took to the ye olde method of writing a letter, or at least a song about writing a letter. ‘Words…’ is very honest and direct song, in spite of its comic book-inspired allegory. It flowed very easily as something I really needed to write, just to get it out of me, to narrate to myself what I was feeling. It came out as a mix of division, nostalgia, anger, envy and love. To write a love song to a friend was not something I had done before. Most “love songs” are your classic romantic hetero unrequited appeals for joining, uniting, accepting, and/or most typically, fucking. So it was new territory to write in and that was somewhere I needed to go.

Lyrically, the song started finding a melody on an old nylon string guitar based around the line, “You cut a long shadow.” This had echoes for me from a Joe Strummer and the Mescaleros song, ‘Long Shadow’, I heard several years ago that I thought was about the best Joe Strummer song I’d ever heard (I’ve never been much of a Clash fan). This coincided with a time when I’d got pissed off with playing acoustic guitar in the band and had bought a sexy white ’65 Jazzmaster reissue (it’s all about the tremolo arm for me). I’d just got a spanking new amp as well and was loving every droplet of sound I was finding – everything was fresh with quivering electric dew. All the fullness I had been straining for in my acoustic kind of just bloomed and the music of ‘Batman’ was one of the first expeditions I made on this newfound rig.

The title of the song was pretty much the lid on the whole thing. I thought, “Fuck it, this is a heavy kind of song, the contrast with the image of some weird letter from Robin to Batman just seemed to lighten it up, provoke a different perspective to read the song from, balance the sucker out a bit”. Batman’s become pretty heavy and existential these days, especially if, as I did, you grew up with the KAPOW era of the TV series. What went so wrong and where the fuck did Batman’s friend Robin disappear to?”