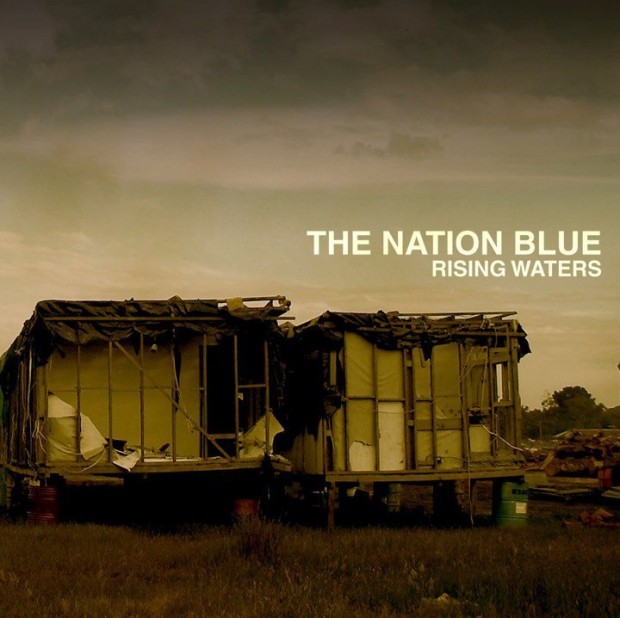 For music fans, it’s the eternal argument. Are great lyrics or great hooks more important in a song? In the first installment of a new series called “Storytellers”, KATE HENNESSY talks to The Nation Blue’s Thomas Lyngcoln about the bleak origins of ‘Cold Cluster’, the final track on the band’s new LP ‘Rising Waters’.

Oh, how bands must bicker about what song to put first on a new record. Play it cool and go with something obscure? Or bonk listeners over the head, first thing? The mind boggles at the arguments over the placement of a single.

That’s why last songs are often so good. They play by their own rules, free of much of this contrivance. It’s almost incumbent on a quality last song to run with its leave pass to go somewhere the others don’t.

The Nation Blue’s ‘Cold Cluster’ from 2009 LP Rising Waters resonates in exactly the way a last song should. It’s just not a very pleasant experience. Instead of letting visitors make a gracious exit as Rising Waters concludes, ‘Cold Cluster’ grabs them by the throat at the door and forces them back down the hall to listen as guitarist and songwriter Thomas Lyngcoln surrenders to terror.

A lonely electric stakes out three notes, shifts key and repeats them. Already the walls feel too close. The vocals set in – disconcertingly it’s a woman – Where did they get her? Is she OK? – backed up by cautious, skittering percussion. The guitar keeps circling. Somewhere, there’s danger.

Circle in shed it bares its teeth/Sings for my fingers, smiles at me/ Songs of freedom out of key/Calls to my hands to dance per chance I slip my moorings.

The verse repeats without pause, mantra-like, as though spiralling down into some poisonous, involuntary meditation. Brief bursts of feedback begin to bite at each other around the edges of the song like snarling guard dogs ready to pounce. And obliterate.

Now in dark dreams come amputees/Hooks in my mouth, cold stumps bleed/Fountains of blood in your front yard/S to the curb and floods the street.

Listen on repeat to any song and you’ll eventually peel back its skin. Listen on repeat to ‘Cold Cluster’ and you risk a degree of psychic emaciation. It attempts, and fails, at a reckoning, leaving nothing of nourishment for the spirit. Lyngcoln’s moment of catharsis doesn’t pass.

The first time I used a radial arm saw my balls disappeared into my guts. A radial arm is a bench-mounted blade that sits on a track that you pull out towards you. For a guitarist, the motion of pulling a spinning blade out past your fingers is sickening. For the last two years I have worked as a joiner in a carpentry workshop south of ‘fucken Frangson’ (local dialect). Even now, two years into the job, the heaviness of handling that blade is still there.

A friend of mine, Tim Evans, moved overseas a few years back but his shit was still in his old room at another friend’s place. I got a call from Evans saying he’d been given the order to dump the unwanted belongings onto the street for collection.

I love hard rubbish. If somebody is throwing something out it passes through my purgatory to ensure it can’t be employed for something even more pointless than collecting Jurassic crust. So, I inspected the goods and shipped any precious stones down to my best mate who’s still in Tassie, who incidentally had once played in the Sea Scouts with Evans. But I hung onto one relic for further use. This item became the catalyst for ‘Cold Cluster’.

It was an old, barely functioning reverb unit. I took it home and pummeled myself into a reverb psychosis for about three hours. The riff for ‘Cold Cluster’ was the first thing that emanated from the box and it looped in my head for the next couple of weeks leading up to the recording of Rising Waters.

The guitar loop continued in my head at work. With this new progression on loop in my head and day-after-day gazing into the radial arm saw, my mental state bottomed out. I put these words down in half an hour one morning.

I had no aspirations beyond finger retention so verbalising the doom in my head was like vomiting. As the words spewed forth they became bleaker as they dried on the page and I found the vibe was getting a little bit ‘bomby’ (a paranoid pre-occupation with bombing techniques after pro-longed terrorism study often finds fertile ground in whatever downer trip I take).

I guess I just took a fucked idea and made it even more unbearable. Meditations on finger loss plummeting into the murky depths of sleeper cells and detonations. It speaks for a little less time spent clad in camo cape reciting war poetry about the isolation of my penis.

The eventual execution was a bit half-baked due to too many shitty takes and rising inter-band angst. The song was ultimately saved by outsourcing. When I write songs the voice in my head sounds like a woman and after a week of trying to sing like her I handed vocal duties over to the singer of ninetynine Laura McFarlane and Magic Dirt’s Adalita. They saved it by doing things my Cro-Magnon head was incapable of. It ended up being a pretty decent summation of my head noise and a fitting end to Rising Waters. I’m taking the title ‘Cold Cluster’ as the starting point for a new band of the same name with less down-isms.