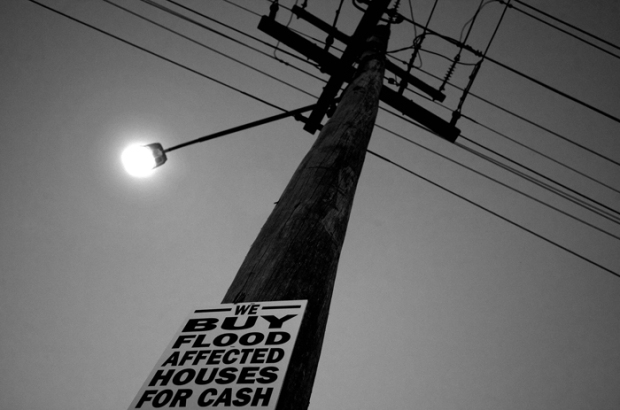 By the time Liberal-National MP Jack Dempsey opens the exhibition, the white wine is gone. “Do you want a 4X Gold instead?” asks the woman at the bar. It’s not late – afternoon sun lingers atop palm trees outside – but Bundaberg Regional Art Gallery may have underestimated how many would come to Brad Marsellos’s exhibition opening.

Three hundred people pack into the gallery on March 14. Dempsey, at times, seems close to tears while addressing the crowd. “Coming here, I reflect on the most extreme disaster in the history of this great city”. After the speeches, people circle, looking intently at the photographs; craning to see details. There is little of that breezily social air openings usually have, where the art feels sidelined. This exhibition has a personal connection for many here.

Fourteen months earlier, in January 2013, Cyclone Oswald dumped heavy rain west of Bundaberg. Overnight the Burnett River rose to inundate nearly every home in Bundaberg North, catching residents by surprise. About 4,000 homes were affected and some 600 residents were airlifted out of the flood zone by a fleet of helicopters, including two army Black Hawks.

Bundaberg local and photographer Brad Marsellos covered the event. “It was like a warzone,” he says. “Houses smashed down, everything in mud, people’s possessions lying around, the army roaming the streets, helicopters overhead and the smell of death everywhere.”

As it slipped off the media radar, Marsellos kept shooting. The result is Sunken Houses, a series of 24 darkly moving photographs documenting a year in which Marsellos saw residents struggle to resume their lives, many sorely under-insured. “It’s afterwards that people suffer the most. When their marriages are breaking up, they’re losing their homes, they can’t afford to pay their insurance any more. The recovery is as bad as the actual event,” he says.

While Sunken Houses re-kindles those difficult memories Marsellos believes the exhibition – which broke gallery attendance records – is also helping locals to heal. “So many people walked in and burst into tears. It’s a challenge to admit something’s wrong, book in [therapy] and wait three weeks to see someone. So if someone can walk into a gallery and deal with those emotions, that’s amazing. Art is a wonderful way to open things up.”

Also helping the healing process is a score created by musician Heinz Riegler who came to Bundaberg for a field trip in September 2013. “Brad took me all over town,” Riegler says. “I was shocked there was still destroyed furniture piled up and empty streets. That people could be so abandoned in a wealthy country like Australia … I couldn’t get my head around that. I’d collapse in bed at night, blasted by the experience.”

Two interactions particularly shook Riegler. “One guy stayed at his home in the caravan park, which was destroyed, because he had nowhere else to go. He looked at me and said ‘There is no future man’. He wasn’t some angsty teenager, you know? I looked back at him and I believed it.”

Riegler asked a rebuilding local if he was worried about another flood. “He was really stern and said ‘no’ immediately. Then, 30 seconds later, it was like a mask peeling away and there was real fear. He said ‘surely it won’t happen again’. That fascinated me. If we accept climate change will see these events happening more – what does that mean for people in flood-prone areas? How does it affect their mental health?”

Thus, Riegler’s ambient-style score, which plays on loop, has an “embedded” calming component as well as a “thread of paranoia” about reoccurring events. In tandem with the photographs, its impact is undeniable, getting under your skin how only sound can, deepening both the shadows and light in Marsellos’s images.

Riegler – an Austrian-born composer based in Brisbane – says it was a challenge to shake the fear he was capitalising, artistically, on “other people’s misery”. He moved to Australia 20 years ago as part of a successful rock band but, as his work became more experimental in its expression, he shed popular music’s desire to please.

“My concern for audience reception has become very removed from what I do but [with Sunken Houses] it came back. To make a work so intensely close to the community’s experience gave it an extra responsibility – this was an audience I had to think about. Knowing people would be confronted with my score, the photos and also their own baggage … I had to be ultra sensitive about that scenario.”

Marsellos, meanwhile, applauds the fact that Riegler is not a “Bundy” local and thinks more city artists should experience regional Australia. “Inner–city artists can get stuck in following trends. It becomes a goldfish bowl mentality where they’re all going to the same three galleries and not trying to understand the hardships broader to Australia.

“Traditionally, artists spent time in remote areas. People like Russell Drysdale, Margaret Olley and Sidney Nolan really challenged themselves to have unique experiences and their work is alive with the tones and colours and characters of Australia that are almost a cliché now but weren’t at the time.

“Our country is facing some extreme issues … and it’s up to the artists to leave their comfort zones and document these things. The media hasn’t existed long, relatively, so major events were always documented by artists: writers, painters and more recently photographers. Even the ancient aboriginal art we find is about droughts and hunting and the location of waterholes.”

Sunken Houses finishes in Bundaberg on April 27 though Marsellos – who will not sell the art – is exploring options to tour it to other states. “It’s too important to just get rolled under my bed. We are seeing so many climate-change related events: floods, fires, tornadoes. This work is a message for anyone affected by these events, showing how long the recovery journey is, so people know they don’t have to recover in a week.”

Or, in Riegler’s mind, recover at all. The stereotype of Australians – especially regional Australians – as hardy types who surmount challenges with gritty resilience is a myth that needs questioning. “There is a narrative that accompanies these events. We got battered, we pulled together, we recovered. Maybe it has to be that way but we rarely afford people the chance to be weak. We don’t allow people to be defeated.”