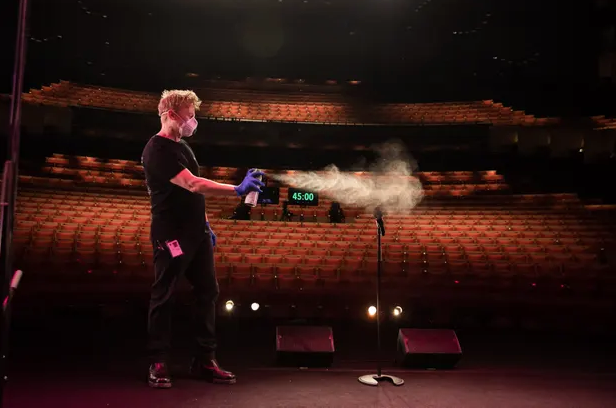 First published in The Guardian Australia, May 2020

Vivid festival was due to light up Sydney on Friday but instead the city is dark and silent bar a few night-joggers ploughing the streets. There’s a stir at Joan Sutherland theatre though, guitars leaning on amps ready for post-punk band Low Life’s concert – the first contemporary music act to be presented as part of the opera house’s digital season. At the band’s request, a slab of silver bullets (Reschs Pilsener) and KFC have been delivered to the green room. The venue is permitting individual dinners only: buckets and shared fries would breach its social distancing rules. Onstage, plastic bags are puckered around each microphone and, when they’re removed, engineers clap to test the audio. Say goodbye, world, to handshakes, shared Holy Communion, candles on cake and “microphone check 1-2”.

Two floors down is where the action is. The recording and broadcasting studio has been contributing to the opera house program for some time – its talent evidenced by last year’s triumphant live stream of the Cure – but no one foresaw its speedy ascension to mission control for literally every show.

“We finalised and rolled out in 18 days a job that would have taken 18 months,” says head of digital programming Stuart Buchanan. New skills had to be honed given the entire audience was at home. Too much white light blows out the footage, for example, and too much smoke obscures it. The experience of virtual viewers no longer needed to play second fiddle to that of the manifest hordes upstairs. It was the only fiddle.

Sydney band Low Life pull a similar hardcore scene crossover crowd to the one that swarmed the opera house stage in 2015 during Royal Headache’s Vivid show. Low Life’s fans are dedicated but they’re nowhere near as numerous as a Triple J heritage act or an export-friendly buzz band. Opera house programmers are currently freed, of course, from the financial imperatives of bums on seats but, even so, it’s commendable that freedom was extended in the direction of a local, underground act in a city rarely inclined to give such scenes even an inch of rope.

Which, really, is the stony ground that’s nourished Low Life’s Sydney sensibility. “We’re influenced by … the hot and muggy concrete streets of the West and South West, the ‘glorious beaches’ of South Sydney, the racial tensions left over from the putrid Cronulla riots of 2006 … all the desperation embedded in and around these areas,” frontman Mitch Tolman has said.

Downstairs, as they play, Craig Tinetti directs four camera operators while cutting footage in real time. He bops in his seat, his stream of commands rhythmic and hypnotic themselves. If this isn’t witnessing a flow state, I’m not sure what is. These exclusively livestreamed shows are more spontaneous than the rehearsed productions the venue has staged before, says Tinetti. He gives camera operators largely free rein unless he sees a “money shot” brewing. “A drummer will sort of eyeball the cymbal before a crash or you’ll see an arm coming down for a power chord,” he says.

To viewers at home there is zero pretense that this is a regular live show. The auditorium house lights stay up; each exposed seat as raw and red as a ripped-out tooth. The wide shots from behind drummer, Greg Alfaro, revel in the absurdity of the uninhabited room, channelling the spirit of bombastic Pink Floyd doco Live in Pompeii or, as Buchanan suggests, “a bit of a Spinal Tap feel”. Certainly, it’s a creative flourish that places the footage firmly in pandemic-era Australia. The curtain behind the band stays up, exposing the mechanics of live performance that audiences rarely see. Aside from looking cool and gritty on film it illustrates how uneven the lockdown’s impact has been. While the recording and broadcasting studio was catapulted into indispensability, not so for other production staff. Tonight’s gig is knocked together by a team of around 20, Buchanan says.

Twenty solicitous techs are still more than Low Life has been lavished with before. How will a band that’s stewed up its best flavours in adversity – or at least musing on it – work here? Can the Opera House even do “putrid”? The gut punch of Low Life’s songs is their perennial downward slide – take Emmie for example – with guitars that also glimmer with a kind of ruinous beauty. But what happens to all those cathartic fringe-dweller feels when we’re snuggled up in our comfies watching from the couch?

Turns out Low Life have chemistry aplenty and their identity as a band prevails. The bloodless rage of Tolman’s voice is even more intense and, given the melee that usually obstructs a good view at pub gigs, here we get godly stadium-act close-ups. There’s no #iso pep talks or public health messages, either. The only shoutouts are to their mums, their mates and to independent labels such as Goner Records and Cool Death.

While the band played it cool on social media – “same antics, different venue” – the reality is that these concerts could be game-changers for acts such as Low Life. In Victoria there have been initiatives to support live music; not so in New South Wales. We can only hope the Opera House continues to elevate non-mainstream acts because smaller venues are going to be struggling for a while.

Making a good case for the unsealed borders between the two states is the guest appearance from Daniel Stewart, singer of cult Melbourne band Total Control. A Western Sydney Wanderers football club scarf is draped over his skull and his nefarious head-nodding brings more menace, even, then his powerfully droll vocals on Dream Machine and Lust Forevermore.

The gig is just a crumb of what Sydney label RIP Society and store Repressed Records had been dishing up at the sails as Vivid guest curators. Though as the pandemic has taught us: be thankful. Take the crumb.