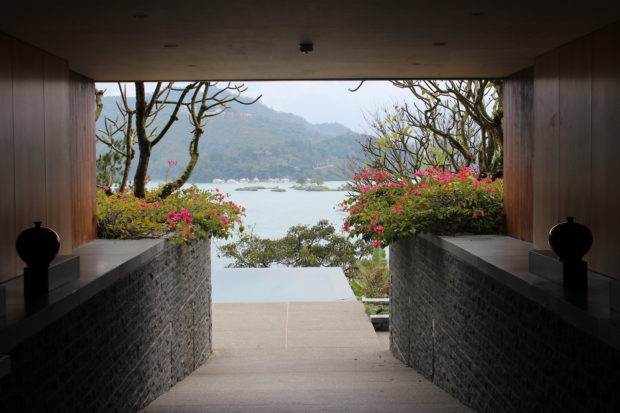 Exotic greenery sprouts from people’s plates. They dip dumplings in sauce, slurp milky-looking soup and line-up for ladlefuls of rice congee. A waiter approaches to offer me coffee and an omelette, which I gratefully accept. I’ll try any food once – but not for breakfast.

I’m at a hotel known simply as “the Lalu”. Once, only senior government officials and emperors were allowed here; in the 1950s it was President Chiang Kai-shek’s summer home. Now, the Lalu is open to whoever can afford the spacious Zen-designed rooms overlooking Sun Moon Lake.

The lake is a misty, mystical vision of blurred blues and purples. The fog moves constantly, discreetly. You look up to see the cascading ridge of a mountain range become un-shrouded; glance back and it is gone, swallowed by soft white. A bike ride around the lake’s blossomed perimeter wheels us past couples posing for wedding photos (taken weeks before the big day) and packs of chattering women wearing face-masks and fleecy-lined jumpers. Couples canoodle on tandem bikes and teenagers whiz by the tanoak trees. Everyone seems happy.

Before the Han Chinese began immigrating here in the 17th century, Taiwan was home to Austronesians who are now just 2.3% of the population.

An infamous black tea called ‘No.18’ is grown here and trucked to teahouses around Taiwan. In November there are lakeside operas and in September, a race – the only day swimming in the lake is allowed. Any day, any month, you will find a throng of tourists clamouring for a photo in front of a stone with ‘Sun Moon Lake’ carved on it. The rock is unimpressive. “Aren’t there other monuments that say Sun Moon Lake?” I ask my tour guide, Bella. “Yes,” she says. “But no other rocks that only have those three words.” Scratch the surface in Taiwan and there is usually a deeper meaning grounded in symbolism or tradition. I teach Bella the word ‘superstition’ which she agrees will be handy for her English-speaking tours.

I’ve given you a head start but be honest: how much do you know about Taiwan? That it is an island with ties to China? That it has a thriving electronic manufacturing sector and was once dubbed an Asian “tiger economy”? Foodies will cite the dumplings of global restaurant Din Tai Fung but after that, the gears begin to creak.

Over an Oolong tea sipped from thimble-sized cups, Taipei cooking school owner Ivy Chen tells me: “We’re seen as one part of China, just a small island. We’re still trying to find our identity.” Ivy teaches me how to make what is arguably Taiwan’s most well-loved dish: braised minced pork on rice. Food is the best way to trace Taiwan’s history, she says. Japan governed Taiwan for 50 years until 1945 and older people speak the Japanese they learnt at school. Japan’s influence is still present in the food, architecture, fashion and pastimes like outdoor hot springs. High-end hotels, such as Xinyi district’s Eslite Hotel, have Japanese-made toilets with heated seats and wall panels offering a dizzying number of washing, drying and perfuming options.

In the late 1930s, the Japanese built a tobacco plant in Xinyi. It fell into ruin but was reclaimed in 2011 as the Songshan Cultural and Creative Park (the artsy Eslite Hotel sits within the precinct). The warehouses are now home to galleries, bookstores, design museums and a multi-level shopping mall with artisanal boutiques selling wares seemingly all made from leather, linen, wool and wood.

The majority of tourists come from mainland China and Hong Kong, often to enjoy Chinese artefacts and traditions that are better preserved here than in China. After a military coup in Beijing in 1924, the Qing royal family left their palace abruptly, leaving many ancient treasures behind. Conflicts with Japan during the 1930s saw the booty anxiously stored here and there, for preservation, but when the Communist Party began to prevail in 1948, the most precious artefacts were shipped to Taiwan, where they remain today at Taipei’s National Palace Museum. Millions come to experience Taiwan’s version of the Lantern (Yuan Xiao) Festival, celebrated on the last day of Chinese New Year. I am here to see it too –and Year Of The Monkey is just one day away. Before Bella can tell me the legend, however, I am telling her. “The monk journeys to India with the monkey, a pig and a sea creature, right?” She is shocked – then happy. “Yes! Very good!” My knowledge equals hers, gleaned from a childhood in Australia watching a television show called Monkey Magic.

The government-funded Lantern Festival is an annual event but in the quaint town of Shifen, DIY sky lanterns are celebrated year-round. Set among yet more misty mountains, Shifen has transitioned from a coal-mining town to a tourist town. Train tracks split the town in two, hemmed by furiously busy sidewalks of trinket-sellers and food vendors. We sit on tiny plastic stools and eat noodles from the wok of a woman surely in her nineties, her cheerfulness undiminished by age.

We buy a paper lantern to write our wishes on the side with calligraphy brushes. I go blank: what to wish for? This is a ritual people seem to genuinely believe and I don’t want to waste my chance. Bella nudges me. “Just write ‘happy, love, money,” she advises. So I do, noting how prosaic my English looks next to her traditional Chinese characters. We stand on the tracks, gripping the lantern as it is lit from beneath by the lantern-seller who smiles so kindly you forget he does this all day. Engorged by heat it rises skywards, disappearing into the mist. The next night we travel to Taiwan’s fastest-growing town, Taoyuan City, to be greeted by a 32-hectare spectacular of light. Thousands of pink lanterns are hung on canopies across the sky but those, I expected. The inflatable light sculptures, I did not. For hours we weave between illuminated apparitions: gods, goddesses, Disney characters, nature tableaus, entire scenes from myths and movies. You could spend weeks here and not see it all.

The festival gradually fills with people but still seems hushed. Hundreds of thousands here yet no-one drinking, barely anyone smoking and certainly no pushing or shoving. I have never felt so safe among so many people.

Women wearing bright pink bubble skirts to symbolise the lanterns escort us to our seats for the finale. An immense monkey god waits, unlit, in the centre of the grounds as Taiwan’s President and other officials speak. There are gongs, drums rolls, a countdown – then, green lasers shoot from the Monkey’s eyes as everyone gasps, then applauds. The monkey bursts into light and colour and starts to rotate as fireworks explode. Year Of The Monkey has begun.