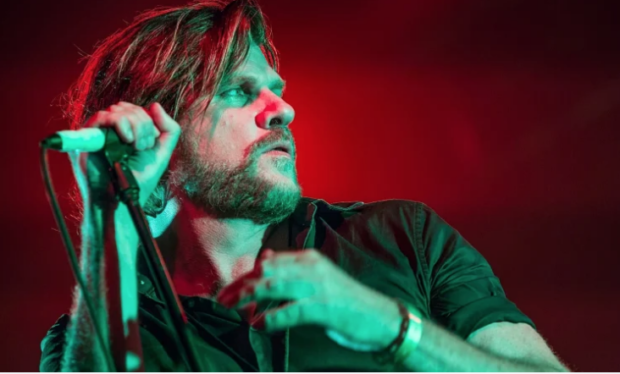 Last I saw of Tex Perkins he was ramming some critical infrastructure – a spine – up the New Years’ Eve concert on Sydney Harbour by dedicating The Honeymoon Is Over (The Cruel Sea) to Prime Minister Scott Morrison before giving the finger to Kirribilli House.

Tonight’s concert with Jez Mead features no acts of rebellion but an aura of humility instead. “I can’t believe I’m here,” says Perkins. “Are you here?”

His only provocation is a prop: a black mask wrapped around his snowplow jaw. Not to shield him from the virus, he says, but from the “sordid history” of rock’n’roll microphones and all the orifices they’ve encountered.

Those smeary, sweaty days are behind us. Microphones are sanitised into near oblivion now and venues such as Camelot use the PA to advertise charcuterie plates and two flavours of strudel to the sedately seated crowd.

The gig’s rig is simple. Two blokes, three guitars (Perkins on electric and acoustic; Mead on strumming and slide) and a set-list that dips into Beasts of Bourbon (Can’t Say No), The Cruel Sea (Anybody But You), The Dark Horses, and covers of Johnny Cash, Tom Waits and Guy Clark.

Perkins gears down into a gurgling growl for Lee Marvin’s Wand’rin’ Star too, from Paint Your Wagon.

He pulls the mask off midway through Snakes and dangles it on the mic stand where it flaps in the fan, like lingerie drying after a wash – another throwback to a time when people got hot and bothered enough to slingshot their undies onstage.

Not tonight. No-one affectionately heckles either or even bellows a request. If they had, Perkins may have used it as something to thrust against, perhaps, and the gig may have steamed up a little. He and Mead have only recently teamed up and in time they may lock into the road-weary groove of a fully gelled duo but for now – though Mead is a truly simpatico sideman – it’s all care and respect between them.

So much so that Perkins doesn’t lay a Cruel Sea classic on us for encore, which would have made perfect set-list sense. Again with the humility, he hands the moment to Mead’s cover of Tim Buckley’s Song To The Siren, which he sings like he was born to sing.

So while we don’t see Perkins loom larger than life, as he can, and there’s little of lingering catharsis, there’s more than enough satisfaction. Six months on from the Black Summer, it seems, gigs are all about gratitude.