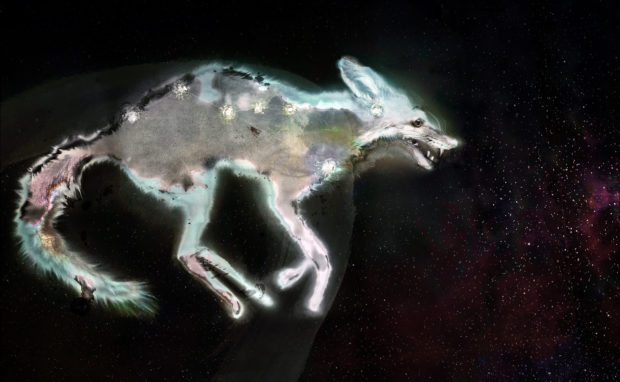 The artist who turns roadkill into fine art

Wearing scuffed boots and leather motorcycle pants, poet and artist Judith Nangala Crispin is pointing to a print on a wall in her home. “It’s called Lily returns to Altair, the brightest of Aquila’s stars, wearing the body of a crow,” she says. The name alone is worthy of a moment’s silence. Crispin’s arthritic labrador wheezes, while outside chooks scratch the soil near a veggie patch. Insects thrum in the bush beyond.

“Lily was a 106-year-old Walpiri lady who I just loved,” she says. “She was an important law woman so I had to destroy my photographs of her when she passed away. So I spoke to her daughter who said, ‘You could do her in the body of a crow’ – because she was crow dreaming.” 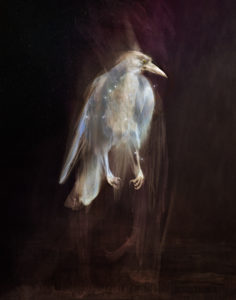 Judith Crispin. ‘Lily returns to Altair, the brightest of Aquila’s stars, wearing the body of a crow.’

All the fine art prints in Crispin’s ongoing series The Dingo’s Noctuary depict the ascending form of a freshly deceased bird or animal, usually roadkill.

On paper, it sounds bleak. And yet. “I sell a lot,” Crispin says (when pressed). “But I don’t think it’s because of my immense talent. I think now, in particular, people are thinking a lot about death. They tell me: ‘I’ve been trying to find a way to reframe death and then I found your work.’ There’s a transcendence they respond to.”

On the driveway where most country folk would park their utes, Crispin has built a geodesic dome which functions as a giant lens. Light streams through its clear plastic walls; inside, dead birds and animals can be stored in freezers. Because her process has a high failure rate, Crispin uses the dome to conduct tests, involving both corporeal and chemical gases and fluids, on a stainless steel bench. If an animal has died on her property, she can work on it here, before its respectful burial, but most of her work is done roadside, due to laws preventing roadkill from being moved.

“Truck drivers will yell ‘What are you doing, darling?’ out the window,” Crispin laughs. “I’ve sold heaps of art to them; some will come back with a dead rabbit or something.”

Perhaps it is a fox, a magpie, a stick insect, a snake or a baby wombat she finds. The carcass, sometimes still warm, is raised onto a Perspex box, where it rests on special photographic paper for up to 50 hours as the passage of sun and moonlight exposes its posthumous portrait.

“I’m honouring the life of that animal,” Crispin says. “You can’t honour a life in a half-second shutter speed, you just can’t. But if you sit for 50 hours with something that has passed away, making sure everything is printing on the page, there is something of honouring in that.”

The prints she sells are limited-edition scans of the originals, which she destroys.

In the works the animals are diaphanous – light has literally passed through their bodies. They appear tugged by a slipstream of spirit – not in purgatory, as such, but some sort of primitive motion. They levitate in a space of brooding luminosity that seems sentient and wholly focused on its task of enfolding each creature back into its care. There’s none of the pathos you might expect from such purposeful memento moris, which is not to say Crispin’s work is not confronting. It is, a little, in the sense you’re getting a glimpse of the brink. Of the beyond. 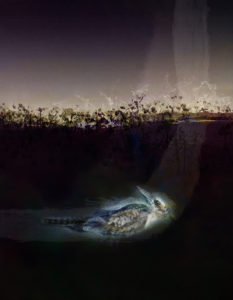 Judith Crispin. ‘There are invisible spider strings connecting us, over time and space, to everyone we’ve ever loved.’

Crispin is a descendent of the Bpangerang people of north-east Victoria. However, her skin name, Nangala, was given to her by the Warlpiri people of the remote Tanami Desert in northern Australia, a place she has lived for a few months each year for a decade.

Years ago, she was a composer for operas and ballets. She has a doctorate in music and composed in Paris and Berlin. “I started feeling uncomfortable with it,” she says. “In Australia, anyway, I felt it would only ever reach an elite audience, which wasn’t necessarily the only audience I wanted to communicate with.”

She started transitioning to photography and poetry in 2007. (“Writing seemed a bit more egalitarian.”)

On early trips to the Tanami, she focused on photography. But again, her compulsion waned.

“Instagram just sucked my soul out,” she says. “I needed to feel what photography was again … I felt everything was becoming faster and cheaper. So I could take 3000 shots on rapid burst and chance might give me one that was OK. But that wasn’t me. It wasn’t my skill. I wanted to come back to the magic I felt in a darkroom as a kid, seeing the picture appearing in the tray. I’m like that little kid again now when I feel a print is going to work.”

The old Walpiri ladies wanted to help her. When she began visiting, her ancestry remained unclear, obscured by the secrets and lies necessitated, up until the late 1960s, by the government’s policy of taking Aboriginal children forcibly from their parents. “[The old ladies] see that it’s very difficult for people who are coming to [their heritage] as adults, when their upbringing has been different.”

Her photographs, they told Crispin, were a kind of monologue. “I was trying to tell people what to think. And they were saying I could do that as long as I kept believing with enormous confidence I had something to say. They said, ‘But maybe you’ll discover more about yourself and everything else, if you let something else have a say as well.’ ”

That “something else” was Country. It was the clay, sticks, leaves, seeds, sap, ceremonial ochres and stones that Crispin introduces as her photographic exposures develop in a process she describes as a “genuine collaboration with the landscape”, with her works made “from light, earth and flesh”. If an ant exits one of the creatures’ bodies, it may leave what looks to be a vast constellation of stars in its tiny wake. Blood, gases, condensation and dust – all are permitted to leave their mark.

In September, Crispin won the prestigious Blake Poetry Prize, although she is casual about her multiple specialties. “They’re all the same thing,” she says. “It’s to do with degrees of abstraction. If I’m going to say something really abstract, I can do that with music. Photography is very concrete. You can have poetic elements but it’s figurative, you can see things. Poetry is sort of in the middle but, like music, it’s got rhythm, it takes place over time, it’s got intonation. 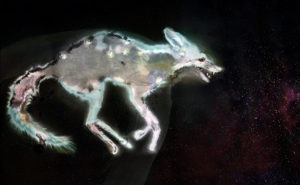 “There’s this whole patriarchal academic idea that there should be experts, masters. So you can’t be outside your own discipline, there has to be this silo you operate inside. But for many creative people, that’s anathema. Creativity is a force, it’s not a genre. Nobody’s born going, ‘I want to be a plasticine sculptor.’ ”

One thing Crispin does want to be, rather desperately, is a Rural Fire Service volunteer. She has one exam left but packed in plenty of practical experience last summer when her rural community, Wamboin, half an hour from Canberra, burnt for nine weeks and she joined a “mosquito army” of rookie fire-fighters.

Her next project is an illustrated verse novel using The Dingo’s Noctuary prints along with maps, plant pressings and the poems she writes in the hours she sits with her subjects on the roadside. She has already given them names – Leonard, Hazel, Ken, Emmanuel – a tender, human touch.

The titles of her prints, meanwhile, double as minimalist elegies. There is this one of a giant stick insect, from 2020: Albert, electric in moonlight, passes one last time above the stick insect tribes. And from 2019, for a magpie portrait: In Joan’s garden, she slipped off her feathered gown, and left it folded in wildflowers – a last gift.

“I’ve refused to sell prints to collectors who want to put them away,” she says. “I want ordinary people to know why I’m not afraid of dying now. I want others to lose that fear too. This isn’t me transfiguring a bird: that’s how that bird looks, on that page, with the light. That’s what happens. If we can see what death is, we’re not going to be as terrified.”

“So do you create the prints for yourself or for other people?” I ask.

“I do them for the animal,” she says.