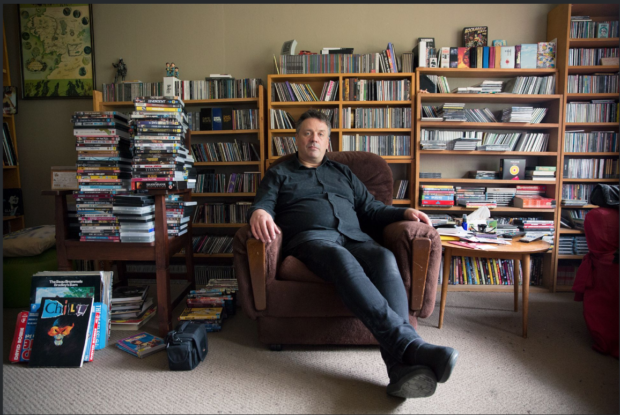 The Chills: The triumph and tragedy of Martin Phillips (documentary)

The story of the tortured male rock ‘n’ roll genius is barely even a ‘story’ anymore. It’s a trope we have awoken to. A film that tracks this trope, in 2019, needs to not once whiff of cliché. It needs to prove there’s life in the old rock dog (story) yet. Elevating the film from good to quietly extraordinary are two things: timing and access. Initially, Parnell’s approach was “let’s just shoot for a while and see”. There’d been five failed attempts to document The Chills’ story so a cautious line seemed wise.

In an early shoot, Phillips, 54-years-old, was told he could die within eight months if he didn’t drastically change his lifestyle to let his liver heal. It’s ruthless to state but this devastating moment for Phillips was one of serendipity for Parnell, as the filmmaker there to catch a set up of pure catharsis.

Music (and, yes, archival footage of when The Chills were young and hot) plays a starring role but silence is wielded well too. Phillips’ anxious solitude in the doctor’s waiting room is underscored by it and, later, the hush as the nurse’s ultrasound wand slides over his belly and she utters those dreadful words. “We’ll sit down and we’ll have a talk.”

From that bleak news onwards, Phillips gives generous access to his hoarderly house crammed with cassette tapes, figurines, music gear, comics and thigh-high boxes of plastic dross. “I think because I live alone this stuff kind of filled that void,” Phillips says. We’re granted access, too, to moments of soul-searching fragility. “I do have regrets,” he says. “I told myself the appropriate lies. Particularly as a drug addict you go to great lengths to create a self-serving reality.” Because his health improves as the film progresses it avoids the cliché, too, of “old guy looks back on glories”. Shit is happening in ‘the now’ too. There’s the rollercoaster of his Hepatitis C treatment, recording sessions of 2018 album, Snow Bound, and his witty art guff as he’s spray-painting a mummified cat.

A crucial thread is interviews with a bevy of still-bruised ex-Chills. Chins wobble, eyes glisten and heads are ruefully shaken. Filmed mostly in their own homes, the conversations are intimate, true and sometimes, happy. Buttery sun spills over the face of ex-drummer, Caroline Easther, as she flips through a photo album of an early 80s UK tour.

There are 27 ex-Chills – a figure that speaks for itself – so their stories are only lightly plunged but it’s easy to fill the gaps. “My time in The Chills defined my adulthood,” says ex-bassist Justin Harwood. “We thought we were going to rule the world,” says ex-manager Craig Taylor. The interviews show the universal truth of the toll music takes on its creators, far and wide, and how hard it is reconcile that with the head-kicking industry power brokers The Chills once chafed against.

Then there’s Dunedin itself, clinging to the edge of the wild and woolly Otago Peninsula; its presence felt almost as strongly as another character in the film and a city Tim Finn (Crowded House/Fleetwood Max) epitomises well. “Sometimes in isolated places amazing things can happen.”