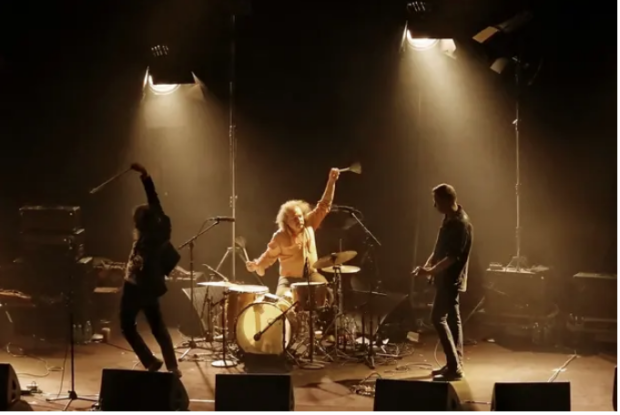 First published in The Guardian Australia, May 2019

“Unique” is a word that’s flung around a lot. Yet most acts it’s slapped on, such as the Cure, left legions of imitators in their wake. The word wore off.

Two Australian instrumental trios remain worthy of the superlative. We suspected they were pretty astonishing from the start but we were marvelling, then, from the thickets of youth. Time did the great reveal. In 2019, no one else sounds like the Necks or the Dirty Three, still.

In 2009, Brian Eno invited the Necks to play the first Vivid festival. Last year Mick Turner (guitar) and Jim White (drums) of the Dirty Three performed Moonpix with Cat Power. And this year, the original trio with Warren Ellis (violin) is celebrating 25 years since their self-titled debut record was released by playing it in full, at a show which premiered at Vivid Sydney on Sunday before it travels to Hobart in June.

It’s impossible to find flaw with the performance, though its x factor is something collectively felt. A kind of accruing, song by fiery song, of irrefutable proof as to how truly great this band is.

I’m among good company in the gushing. Before the gig, Darcy Maine’s 2006 documentary The Dirty Three was screened. It offers neither an arc nor a deep dive. No warts are shown, let alone all of them. Rather it’s a rambling 90-minute exaltation of a Melbourne band Maine describes as “an underground band who’s famous with all the underground people”.

Amid lots of distinctly 90s camcorder-style footage, Nick Cave’s interview draws the most guffaws. “I find singers in bands quite distracting,” he says. Chief fanboy Noah Taylor says: “There’s something of Melbourne about it; the Greek and Irish music in the background.”

We discover Ellis’s first instrument was an accordion fished out of a dump. A mop was used as a mic stand for their first gig at the Prince of Wales hotel and later came the incessant touring. “I said ‘what happened to my 30s?’ and Jim said ‘you went on tour’,” Turner says.

We don’t see the gig where Ellis went so hard he was pronounced dead onstage, but we do see other “very violent, very demonic” footage. Pure fandom, says Cave, prompted him to bring them on tour in 1995. “Playing with The Dirty Three was a chance to see The Dirty Three,” he says. Taylor recalls a London gig where “people started spontaneously weeping.”

Expectations are worryingly high when the film ends. Everyone’s older now, for starters. If Ellis dies again it’ll probably be for good.

And yet. Skipped? Bound? Man-frolicked? Bucking bronco-ed? Verbs that fail to depict how Ellis’s wizardly beard and wiry limbs arrive on stage to the blaring yacht rock of Boz Scaggs’s Lido Shuffle.

It’s hard to overstress what a scorcher of a start it is. It doesn’t feel like Sunday night any more. Were the room’s groupthink translated on to screens like Italian at the opera, it would read: “Damn it’s good to see them! Are they still setting up? Where are the roadies? It’s like we’re at the pub! Man, this song is good. Who is it again? Billy Joel? Elton John? Wait, is Warren windmilling already?”

Ellis explains the Scaggs. “When you go home and have kids you won’t be doing it to Indian Love Song or Everything’s Fucked, you’ll do it to Boz Scaggs,” he says. It strikes me perhaps he really has mentally zoomed back 25 years to when his fans were fertile.

They intersperse the self-titled record with tracks from 1996’s Horse Stories, including Sue’s Last Ride, 1000 Miles and Hope. Turner and White, as always, save their expression for the music – besides, one maniac per three-piece is a good rule of thumb.

For the lovely Kim’s Dirt (“written in Kim Salmon’s kitchen”), Ellis tosses out to the crowd three whirling toys used for the wistful whistling sound at the start. This, and album highlight Last Night, are two of those tender, dimmed-down Dirty Three moments, where Turner’s lullaby-like loops are the quicksand all the emoting is sucked back into.

White’s trunk is as still as a tree but his arms move with sapling grace; the kind of not-jazz but jazz-deft drumming that leaves you stunned every time. Tambourines tumble from the kit; mallets are dropped on their furry heads and caught on the upward bounce. Yet always you remain convinced it’s for sonic virtue alone and never for showmanship.

Warren prowls, rants (“Good Morning Australia has the narrative arc of a burp”), sits legs dangling on the stage’s edge, hugs a fan before the first song’s started, demands a Sharpie to autograph a cake of Palmolive Gold soap. He lies on his back, one shiny shoe in the air. All three seem happy. There’s a group hug at some point.

Yet Ellis’s energy doesn’t wane. Approaching two hours, he appeals to the side of stage. “Is there anyone responsible here? What’s the curfew?” No reply. A song or two later Turner does a yawning gesture in Ellis’s direction, and Ellis says the next song will be the last.

No Australian women were selected to praise the Dirty Three in Maine’s doco, which was an oversight. So over to Jen Cloher, whose 2017 song Loose Magic was written about the band: “Their songs, you know, maybe saved someone’s life,” she told me that year. “They’re one of the world’s greatest living bands without a shadow of a doubt … It speaks straight to your heart.”