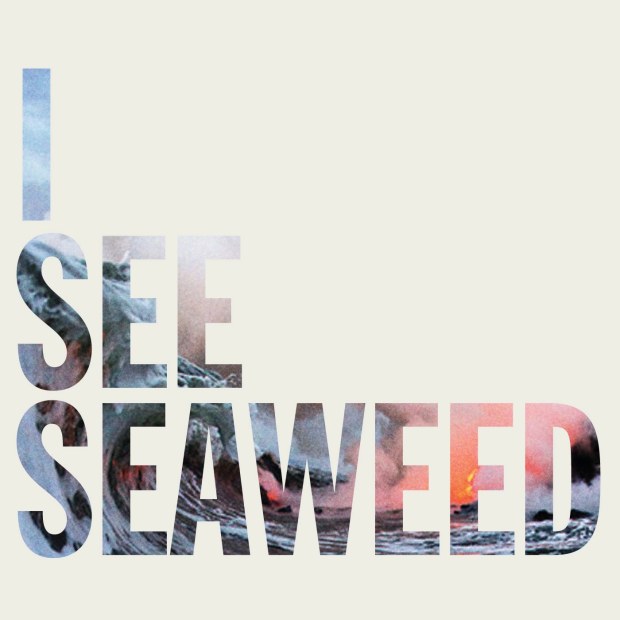 The Drones – I SEE SEAWEED

Music reviewers aren’t in the business of writing words about words. We’re too busy dancing about architecture. Then there’s The Drones, a band whose tinder-dry tension is roused to fire and brimstone ferocity by the lyrics of singer and songwriter Gareth Liddiard. To review a Drones record without addressing the impact of the lyrics would be pointless. But Liddiard’s giddying talent with words makes it hard, as a writer, to not feel outplayed before the game’s begun. No one wants to hold the conch still warm from Gareth Liddiard’s palm. No one wants to go next.

Because if comparisons could kill, the liveliest metaphor I could birth is already dead in the water, snagged in some roots downriver of a line like this from Havilah’s ‘The Drifting Housewife’: “My hopes were razed like three-day growth/Then raked by nervous ticks/Was I the bulls-eye or the launch-pad?/I could never find the switch.” Add to this the suspicion that reviewing The Drones would’ve been easier in the wake of 2005’s Wait Long by the River and the Bodies of Your Enemies Will Float By, when there was still new stuff to say. Because although each Drones record has, in many ways, bettered the one before it, the band’s approach has stayed roughly the same and, thus, so has the critics’. The similar-sounding Drones songs fan out beautifully; the similar-sounding reviews do not.

Oh no. They just start stacking up on the hillside like Pete Seeger’s ticky-tacky boxes.

If Gala Mill’s opening epic ‘Jezebel’ didn’t already prove that The Drones don’t break bad news gently, the opening title track from I See Seaweed does. A few lone piano notes paw around until an electric guitar, typically hangdog and soulful, picks up the slack. Liddiard begins calmly with “I see seaweed on the lawn/There’s no point coming here no more,” but we know what he’s capable of. A decade on, five records down, we’ve got a history together, man. We’re waiting for the axe to fall, for the moment that will tug on the still-healing stitches of songs past and bring all that baggage back.

During the verses of ‘I See Seaweed’, Liddiard’s snarl-sing is delivered into blank, black space coloured only by sprinkles of piano and feathery brush drums, making the meteor streak of guitar all the more alarming when it strikes in tandem with the chorus. The song begins as a tragic story of youth until, in a deft and devastating transition, everyone on earth is lassoed into complicity. “We’re lock-stepping in our billions/Lock-stepping in our swarms/Lock-stepping in the certainty that more need to be born.” The jab that we’re just a bunch of mindless breeders reeks of Havilah’s ‘Oh My’, where Liddiard told those who want to shrink their “stinking footprint” to get their tubes tied. Whether such lines are viewed as darkly funny or starkly true, they’re written to provoke, not to preach. And as a polemicist, that’s precisely why his lyrics work.

Australians can sniff out sermonising like a pack of dogs.

The contribution of new member Steve Hesketh is profound. His piano sophisticates the sound and replaces Havilah’s campfire glow with the guttering candlelight of an underground club awash with misanthropes clinking ice in whiskies. The band as a whole has become increasingly literal as the instruments entwine more tightly around the lyrics, mirroring and punctuating the narrative, as opposed to early Drones records where the stories battled a maelstrom of noise. I See Seaweed is still noisy – confrontingly so in places – but it’s never indiscriminate.

While The Drones’ fury has stayed at even keel, their sad songs have become sadder, with the single ‘How to See Through Fog’ a good example. I’m hazarding that it’s about anti-conformity or, at least, an existential ideal of self-determination. But as “the marble moon” looks on, the song’s protagonist is revealed as insecure and indecisive. “They’ll only ever treat you well/When you’re nothing but a church bell/They’ll only ever think you’re good/When you’re walking like you’re made of wood.” Going through the motions, self-loathing, it’s all there. As the least visceral song, but one of the most affecting, it proves Liddiard is a more nuanced vocalist than he’s been credited for.

If the guy – it’s always a man, right? – in the single is a lost cause, the guy in ‘They’ll Kill You’ is going down fighting. Again, it’s a personal tale until Liddiard’s ragged howl of “Give me back my upper hand/Give me back my second chance/Give me back my evil streak” hurls it into the universal, tapping into the big, ugly emotions that have felled – and fuelled –most of us, like grief, disempowerment and regret. As a lyricist we already knew Liddiard couldn’t be beat. But on ‘They’ll Kill You’ it’s his talent as a vocalist that’s so moving. Lyrics can be researched, picked over and polished for months, but a delivery this good is a quicksilver-fast gift that can’t be manufactured.

Those who’ve seen The Drones live will know he comes direct from the precipice every time. I don’t know how he does it. I doubt he does either.

Mercifully, the requisite scorcher ‘A Moat You Can Stand In’ wrenches us out of our brains and back into our bodies. A reminder of the punk rock piggery of ‘I Don’t Ever Wanna Change’, Hesketh’s rapid-fire one-note piano plays like an accelerated homage to The Stooges’ ‘I Wanna Be Your Dog’. An invective on the Catholic Church, the song is so overheated with spite, screeching guitars and ferocious drum rolls you can almost see the black smoke rising like a pope’s failed ballot. It’s the least evolved song on I See Seaweed, but that’s the point.

By the time ‘The Grey Leader’ ends (with a din that stokes memories of the World War III soundtracks cooked up by defunct Melbourne noiseniks Grey Daturas), I’ve forgotten it’s about a “grey leader” at all. The lyric on I See Seaweed that grabbed me first and moved me most is on this song. It is “Nothing will ever change your mind,” which, to me, sums up life’s intransigence and how little we can influence any of it. Even in Australia, as free from fundamentalism as it is, we’re all hunkered down in our quarters, never to see eye to eye. On ‘Nine Eyes’, meanwhile, Liddiard takes “a strangely disembodied walk down memory lane,” bringing an injured, limping bass line for company and a fractious guitar that splinters apart when things go awry.

‘Laika’ is named for the mongrel dog “cast adrift as though she were a speck of dust” (rocketed into space by Soviet Russia, that is). Here, the band score the story as if from the orchestra pit of a rather terrifying pantomime. Hesketh’s tinkling piano lightens the load until a bad-cop bass hauls the weight of the tale to its inevitable end. As sweetly-toned female backing vocals assist with a sing-song taunt – “You’ll cave under yourselves and become cruel, cruel, cruel” – everything pitches downwards like it’s sliding into a pit. There’s no glimmer of light. None at all.

On the final track, ‘Why Write A Letter That You’ll Never Send?’, the immediacy of the suffering recedes, replaced by the secondhand musing of a friend’s letter, (apparently) read “verbatim.” The action returns to the dimly-lit nightclub – all contemplative piano, light cymbal swipes and a loping kick drum – now in its final washout stages. A cleaner pushes a mop, some drunks argue and linger, a barman polishes glasses … you know the scene. As the increasingly bitter contents of the letter spill out – “Who cares about the Holocaust, man we didn’t learn nothing there, and all its memory does is keep the History Channel on air” – the overwhelming feeling is one of exhausted apathy. There’s so much to fix but it’s way too late. The song fades out. Club’s closed.

There’s not a note wasted on I See Seaweed and the result is eight songs as streamlined in intent as a shark at dusk.