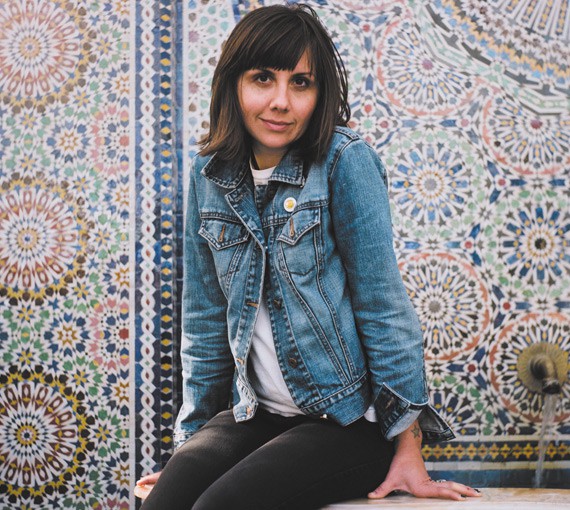 Were I to mimic the style of Chicago-based music critic Jessica Hopper, we’d be off and running by now, or grappling with a question that had bulleted straight to the topic’s heart. When this anthology’s 42 think-pieces, reviews, and ephemera first appeared in Village Voice, Chicago Reader, SPIN and elsewhere, a few words of context may have preceded each of them.

Here, we just have bald beginnings such as ‘Kurt Cobain died for somebody’s sins, but not mine’, ‘The first thing I noticed was that Michael Jackson was gone’, and ‘“People used to compare him to Jesus”, says a backstage manager as David Bazan walks off stage, guitar in hand. “But not so much anymore”.’

Hopper’s extermination of introductory tedium reeks of confidence, and it works. Because if Lana Del Rey’s authenticity issues interest you less than Miley Cyrus’s ‘twerking and waggling tongue’, you are swimming in the story before deciding – or declining – to dive in. In journalism school, such canny openings are called ‘the hook’. Though Hopper never went. Both her parents were editors, though, in her hometown of Minneapolis, where this self-described loner read the newspaper each day after school. On discovering punk at age fifteen, Hopper started a fanzine, Hit It Or Quit It, aligned to the Riot Grrrl movement proselytised by rock band Bikini Kill. Her involvement in the punk scene was bodily and absolute: she played bass guitar, scrawled band names on her shoes, and continued Xeroxing her zine for fifteen years as it grew in stature enough to lure contributions from Jon Caramanica (New York Times) and Sasha Frere-Jones (The New Yorker). Zine culture was big in the 1990s but where other self-publishers struck out, Hopper batted on, her DIY teenage years and punk-rock pedigree foreshadowing a successful career in criticism.

The book begins with a 2002 essay from Hit It Or Quit It in which Hopper explains her ‘inextricable soul entanglement’ with music. The words burst from her wilfully, confessionally. For the fourth consecutive night, she diarises, she is dancing in the dark to Van Morrison, a scene that segues into a stream-of-consciousness list of the weighty life matters that only music can fully express. In the final words we really catch her drift: ‘There is a void in my guts that can only be filled by songs.’ Plainspoken yet visceral, simple yet searing: lines like this are among Hopper’s best.

Such lines glisten among writing that is dense with pop-culture references and American slang; bring poise when her flow is hobbled by the awkward necessities of music writing – a goofy song title here, a pretentious album name there – and lend a timelessness to essays that are grounded in place. Not for a single line do you forget that Hopper is an American critic writing for an American audience about (primarily) American artists. It is what gave these articles such zing when they first appeared. You imagine them being read by Chicagoans in scarves and ‘sock hats’ on their icy morning commute.

Hopper seizes opportunities in the blind spot of other critics. When Michael Jackson dies, she declines the dance parties and drives to his hometown of Gary, Indiana: ‘the Pompeii of the Midwest, a rotting monument to industrialisation, an apocalypse fuelled by plant-closings, white flight and arson.’ When grunge band Dinosaur Jr reissues three seminal albums, she exhumes the songs but also memories of ‘the early summer of 1991 … sitting on a log in the half-woods with a guy I’d met in the front row at a Dinosaur Jr show’. At the Vans Warped Tour, when she sees a boy in a home-made tour T-shirt, she whittles her casual observance into a forensic one. ‘That pre-emptive sentimentality pivoting on this exact moment is what emo has instilled in the culture of punk fandom: advance nostalgia for the peak experience.’

Hopper’s commentary on Miley Cyrus is scalding. ‘[Miley] spent the last half of the year as a lightning rod for our censure and outrage; we cut off her head and she just kept writhing, unchastened,’ she writes, and ‘[Miley’s] truest gift … is the sheer quality of her mirroring, the way she gives us exactly what we want in lethal doses, grinding against our most American horror’ – an argument so good I was goaded into rapturous marginalia. She then depicts Cyrus lying on a bed ‘waiting to be activated by male desire’, the kind of nuanced observation some male music critics might fail to voice.

Which brings me to the book’s inaccurate title. Hopper’s is not the first collection by a living female rock critic. Australian critic Lillian Roxon was alive when Rock Encyclopedia was published in 1969, as was Caroline Coon with 1988: The New Wave Punk Rock Explosion. Hopper acknowledges this but kept the name anyway to ‘plant a flag’ and create a precedent for other women. Since her early Riot Grrrl days, Hopper has walked her talk, too. In Melbourne in 2015, she ran girls-only ‘Future Critics’ classes, and her keynote speech at a music conference in Brisbane, about women’s struggles in music communities, saw many in the auditorium in tears, including Hopper, seemingly as present in the moment then as she always is in her writing.