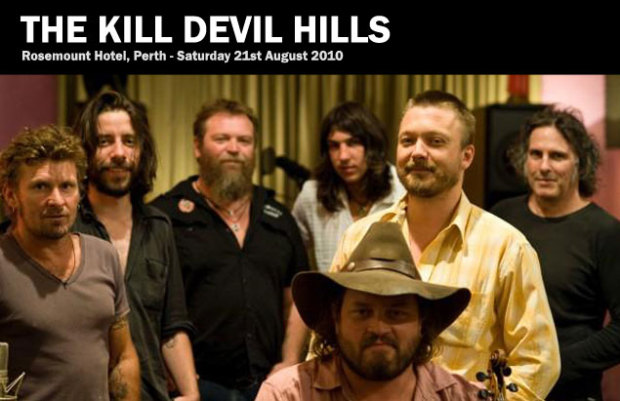 The road rolls before us like a miracle of faith as our car spears its way through the fog. Something akin to muscle memory prompts me to turn left off the Great Western Highway, through the dense mist that shrouds the road, to reach my old local, Hotel Gearin in Katoomba.

We arrive early, after assurances by the pub that the band has no support act and starts at 8.30pm sharp. It’s a bald-faced lie. The Kill Devil Hills are being supported by two other bands – Jim Dead & The Army of Shadows and the Handsome Young Strangers – and are due on at 10.45-ish. Suddenly facing three hours before the band I came to see, and stymied by my commitment to a modicum of Sunday night moderation, I panic like an over-stimulated toddler staring down the barrel of an afternoon at the Guggenheim. What to do? Thank god for pool. We rack up only to discover there’s no white ball. Kill Devil Hills fiddle player, Alex Archer, wanders over to assure us we can expect nothing more from a pub that has just tried to cajole him into accepting a “half-serve” of gnocchi instead of the full serve he ordered.

For all its country pub shambolics, however, twilight in the cloud is delightfully atmospheric, the Gearin glows warm and friendly and when The Devils do their sound check, it sounds blisteringly good. Indeed, much has stayed the same over the years at the merry old Gearin. Except that Aussie actor Jack Thompson bought it, named it “Jack Thompson’s Hotel Gearin” and slapped his leery mug on half-a-dozen bottles of “Jack’s Old Smokey BBQ Sauce” in the bistro.

The time passes pleasantly so it’s quite a shock when the first local bites the dust.

We’re standing on the balcony with fog brushing over our skin, listening to the lovely compositions of Jim Dead & The Army of Shadows, when a man enacts a spectacular stacks-on with the balcony stairs. People rush to his aid – he’s fine. “Someone else just stacked it inside a few seconds ago,” my partner notes, conspiratorially.

We relocate to the band room when The Devils kick off. Jack’s done a great job: it’s a beautiful room. There’s rustic wood paneling and the stage is silhouetted against a stain-glass bay window. There’s also a woman with a tattooed face slumped in the “child’s pose” in the middle of the dance floor. Ah, Katoomba.

From the first chords of ‘The Drought’, the sound is crystalline, loud and perfectly defined. Archer’s violin swoops and moans just how it should and Brendon Humphries’ wonderfully nuanced voice is relayed in full power, lyrics discernable.

It’s revelatory. Rock can sound this good, live? I’d always suspected it could but didn’t think I needed a pilgrimage this far west to confirm it.

I saw The Kill Devil Hills at The Annandale two nights before but The Annandale has a habit of turning everything up to 11 and drowning out the intricacies. My eardrums, accustomed to curling up and cowering, are contented sponges tonight. Unfortunately, I don’t think The Devils have any idea how great it sounds on our side of the stage. They seem to be struggling to get their foldback levels right, with lots of gestures to the sound desk.

The tattooed woman begins undulating across the dance floor, intermittently jerking upright like a stunned wild animal and staring with scared, unfocused eyes into the crowd. The audience ignore her and remain fixated on the band, full of solemn appreciation. She shuffles backwards and comes to rest in the foetal position, curled comfortably across both my feet.

The Kill Devil Hills have honed their set-list well for this February tour – it’s become rather the highlight reel. It still features crowd pleasers from their earlier LPs, Heathen Songs (‘Drinkin Too Much’ and ‘Gunslinger’) and The Drought (‘Did I Damage You?’ and the title track) but lifts the rest from 2009’s Man, You Should Explode.

Drummer Steve Gibson takes over singing for ‘Drinkin Too Much’. He’s backed up by the band on vocals as the song returns, repeatedly, to the finger-wagging chorus: “You tell me that I’m drinking too much.” As always, The Devils sing back up for Gibson as if in philosophical solidarity for the song’s frustrated alcoholic protagonist. The song really walks the line. The first time I heard it I recall feeling pretty uncomfortable sipping on my beer, observing a pack of swaying Western Australians singing along too, losing themselves in the surrender of feeling OK about boozing hard. If ‘Drinkin Too Much’ were a movie, it would be vilified for making addiction seem somehow triumphant. But fuck it, this isn’t Sunday School, this is real-life, this is pub rock, and hard-living anti-heroes totally bring the house down.

Like a friendly left-right jab, they launch directly into ‘It’s Easy When You Don’t Know How’ after ‘Cockfighter’ – the two most rocking songs on Man, You Should Explode. It’s a lethally danceable combo but the tattooed woman is dissuading most people. That is, until an ample woman shows up wearing a black “plelvet” dress and begins a showy, interpretive dance, scowling dramatically back at her friend.

She’s everywhere on the dancefloor all at once.

I applaud her lack of inhibition, but it’s terribly distracting. And terribly familiar as well. Attention-seeking Katoomba lasses like this are the reason I learnt to drink quietly in the corner.

I slink past the dancer to enjoy the beautiful ‘Words from Robin to Batman’ by the side of the stage. Again, it’s the best I’ve heard it sound and I feel a pang of regret there’s not more people here to enjoy it.

The tattooed woman begins slamming her head on the floor. Unfortunately, it’s self-harm, not a rite of appreciation. Locals sitting near us tell us “she’s always like this” but do nothing about it.

“Is everyone OK out there?” a Devil enquires, squinting out. The woman is carted off soon after, kicking and struggling, but only after I tell the staff what’s been going on. It seems odd we’re so unsupervised. Perhaps the inner-city venues could donate a few of their superfluous security reserves to their regional brethren? Maybe the Gearin could donate their sound dude right back at them?

The Kill Devil Hills wrap up with the gospel-style crescendo of ‘I Don’t Believe’ then retire to the balcony for a well-earned ciggie. “I’m going to get drunk now,” announces the young bass player, Ryan Dux. Has anyone told him he’s drinkin too much?