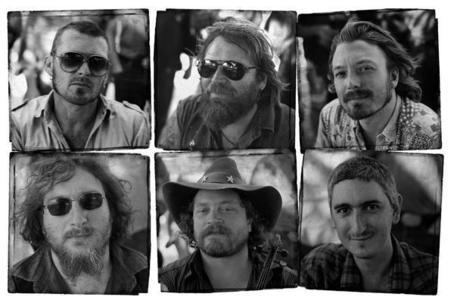 The Kill Devil Hills (The Annandale)

My comp tickets are MIA and the door girl is unconcerned. Pondering the bad news over a beer with friends, the bartender tells us The Kill Devil Hills are upstairs and suggests we ask directly for help. There’s no mistaking the bearded man who swaggers into the downstairs bar five minutes later. He’s a Kill Devil Hill alright. Fiddle player Alex Archer is a stocky slice of vintage WA in worn jeans, work boots and a wide-brimmed black hat – all irrevocably grimy. Rough, red dirt may as well be pooling in the creases of his shirt or spilling from his boots. His gaze is skewiff, he’s disarmingly friendly and he smells of jailbird tobacco. His flight was delayed due to the dust storm, he says, so the band flew in today.

“We reckon it’s nice of you to paint the town red for us and all,” he jokes. He sees us in and we bid farewell.

The Kill Devil Hills are due onstage any second and the front section of the Annandale is filling with fidgety, chatty, good-humoured folk all calling each other by name. “Brad!” yells a woman in front of me. “Braaa-aaad! We’re up ‘ere!”

They’re passing beers from the bar to the front row, chain-gang style, drinking pretty darn persistently for a school night. All the more notable since they’re no spring chickens.
tch?v=S3Qxp-_EPBk”>It’s Easy When You Don’t Know How’ and the distorted lead guitar on ‘Cockfighter’. Perhaps guitarist Steven Joines should reconsider his modest plug-and-play approach touring this record and slap his foot on a pedal or two?

Regardless, Joines is a sight to behold. With his long goatee beard and a blue singlet stretched tight over his gut, he looks like he’d be more comfortable doing long-haul in a semi. “How are youse anyway?” he enquires a few songs in. “I heard things got a bit fucking crazy here yesterday!” (The dust storm, again.)

Archer takes pause from wrenching caterwauls of sound from his fiddle, drags up a bucket of beer and dumps it centre stage like a prize swag.

Four uncapped Coopers appear by Humphries’ feet as they launch into the crazily catchy ‘Siam’ from the new record, a track perfectly poised for a solid decade of crowd sing-alongs. My sister nods sagely. “Western Australians drink,” she says.

Joines’ track ‘Cool my Desire’ comes mid-set and sees the song cut through with a power it doesn’t quite achieve on record. A man, scared of his yearnings (drugs or women, bets on the former), teeters on the edge, talking himself back. Joines has the lumbering heft of a man who could skittle you with one swipe yet he plays a silver glitter-painted guitar beautifully and sings with the simple soulfulness of a tenderhearted truck driver.

No-one in the crowd has heard the new material but you can tell they’re gripped. Admittedly, the Devils are preaching to the converted tonight as they sing directly to the homesick Western hearts in the first few rows. They know it too.

“This is our first show over east,” says Humphries. “And I can see a few of you here are from Perth.”

Over east. “It’s what Western Australians call the Eastern states,” translates my sister. “Brisbane, Sydney, Melbourne … it’s all ‘over east’ to them.”

Humphries sings the sinister closing track from Man…, ‘Lucy On All Fours’, accompanied only by an acoustic guitar. “She don’t love nobody but me/Fingers numb, mind at sea/She don’t love nobody but me.” The man is blessed with something of Springsteen’s innate ability for simples cadences that tug your heartstrings and loses none of his nuance live.

The measured pace and dark sense of purpose of ‘Words from Batman to Robin’, with which they wrap up the set, will please fans of The Drones. While Humphries refuses to altogether lose his wits in the world of a song, as Gareth Liddiard does, he clearly experiences the same grueling internal mechanics of song-as-exorcism. ‘How was it we met / Drunk by the river / We were children then, boys needing brothers.’

As Archer circular breathes his way through a ciggie, they return to deliver a ferocious encore rendition of ‘I Wonder If She’s Thinking Of Me’. The song’s combustive energy, full of an awful, inexplicable jealously that generally only men can understand, nails the show completely.
***