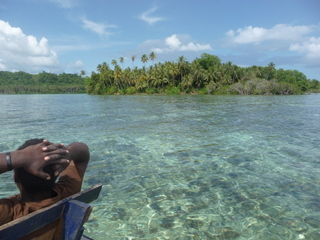 ‘Fortune Forest’ is emblazoned along the side of a logging ship hulking just off the coast of Rendova Island. Heavy machinery sprouts from its hull and dwarves a diminutive boat that passes by carrying visitors – soaked in warm sea spray – to neighbouring Tetepare Island. Both islands are located in the western province of the Solomon Islands, a Melanesian archipelago five degrees south of the equator. The 2-hour boat trip to Tetepare Island … not bad

Sadly, ‘Fortune Forest’ is an apt summary of the region’s recent history. For around 30 years, logging companies have profited by felling the Solomons’ most abundant natural resource – tropical rainforests – making timber the country’s primary revenue source. Yet Tetepare Island is tracking a radically different path to other Solomon Islands and, in doing so, has become eco tourism incarnate. It’s not merely that there’s no logging on Tetepare (and never has been). There are no cars, roads, electricity or barely even any walking trails to blemish its wilderness. And the human population? zero. Tetepare is the largest uninhabited island in the South Pacific.

In the 1860s, Tetepare inhabitants took a drastic step: they abandoned their island home. no one knows for sure what caused this mass exodus but archaeologists and descendants of the original islanders believe headhunting and diseases introduced by whaling ships were factors. In the early- to mid-1900s the british ran a coconut plantation but none of the indigenous population returned to settle.

In the 1990s, a group of descendants of the original islanders decided to sell the logging rights to Tetepare but were challenged by other descendants inclined to preserve the island. Fortunately, the conservationists gained critical mass and the Tetepare descendants Association (TdA) was born. The TdA began to locate the Tetepare diaspora, by then scattered across the archipelago. These descendants now own and exclusively manage Tetepare, set aside in 2002 purely for conservation. Rangers patrol the 13 km-long marine Protected Area to enforce the ‘no-take’ policy throughout Tetepare’s reefs, lagoons and coastal waters. with nothing but natural predators, the fish grow huge, visible to the naked eye as they dart about in the clear, blue water.

When off duty, TDA employees return to their villages on Rendova Island, leaving guests (maximum 13 at any one time) with little human contact. A fact that feels all the more intense when the buff-headed coucal (a cuckoo) emits its hoarse, bloodthirsty shriek from some unknown perch in the canopy.

On approach by boat, Tetepare resembles an archetypical lost world. barring the sago palm thatched huts, there’s no development across all 120 square kilometres of the island. Instead, immeasurably dense rainforest prevails: giant taro, banyan trees and medicinal plants. “It looks like something from King Kong,” my companion marvels, peering bug-eyed into the rainforest, thick with entangled vines.

The TDA boat skids up to improvised beach moorings around the island’s ragged circumference – the only other mode of transport is on foot. Reef sharks, dolphins and a wonderful diversity of fish swim in these waters, as well as dugongs, which feed on the seagrass meadows fringing Tetepare. I see a dugong the first time I go snorkelling: it undulates by with more grace than I had imagined possible from such an awkward-looking creature.

Picking our way through gnarled rainforest to crocodile lake one day, where saltwater crocs lurk by day before feeding at the river mouth by night, we hear wings whooshing so loudly above that we duck, expecting a pterodactyl perhaps, but greeted instead with a glimpse of the goofy-looking Blyth’s Hornbill, another rare species. A torchlit night walk is an unmissable activity. but critter-phobes beware: simply everything crawls, scurries, skitters or unfurls. Failing that, it glows. There’s luminescent lichen, phosphorescent bugs, fireflies and even glowing mushrooms bulging from the moist forest floor.

TdA guides accompany all activities on Tetepare. For the most part they are shy, stoic men who go barefoot on terrain including razor-sharp coral (a no-no for tender-footed visitors!). The guides are knowledgeable when prompted; it’s good to be armed with questions. Their skill is in action not words, as when they peel off into the night and return clutching a sleeping snake, a land crab, or most impressive of all, a coconut crab (Birgus latro).

Resembling the spider monster ‘Shelob’ from the Lord of the rings, the coconut or robber crab is the world’s largest land- living arthropod (a grouping that includes insects, spiders and crustaceans). our torch beams quiver as an 85-year-old crab breaks a stick with pincers accustomed to cracking open coconut shells (its favourite feast). Regrettably a delicacy, the coconut crab is extinct in many regions due to poaching but is protected on Tetepare.

Three species of marine turtles – the critically endangered leatherback and hawksbill turtles, and the endangered green turtle – nest on Tetepare’s volcanic black sand beaches. The island’s flagship conservation activity is a leatherback breeding program. The species is close to extinction due to egg harvesting, hunting, marine pollution, climate change and accidental deaths from commercial fishing. In the nesting and hatching season (September to April), TDA rangers tag nesting females, protect and relocate nests and collect data on how many eggs have hatched successfully. Guests can camp rough on Queru Beach and wait to be roused to watch the leatherback hatchlings erupt through the sand and totter towards the water.

We, however, enjoy a different sight at 1.45 am when a pregnant mother hauls herself from the waves to nest. TdA rangers have astonishing eyesight in the dark and they quietly surround the mother before we see a thing. She’s big – around 300 kilos – with a docile, prehistoric face. watching her rhythmically flick sand aside as she digs a pit for her eggs is both fascinating and strangely tranquillising.

With so few leatherbacks left, every hatchling is precious. As fast as her eggs are dropped, rangers scoop them up to relocate them safely. eggs are under threat from tides, plant roots, monitor lizards and poachers. once hatched, babies are threatened by eagles, crocodiles and heavy waves as they approach the water. once in the sea, sharks, trevally fish, barracuda, fishing boats and nets join the formidable list of hazards.

For a quicker fix of turtle conservation, join a turtle ‘rodeo’ early one morning. It’s hard not to squeal as the boat zooms around in hot pursuit of amazingly deft green turtles that hook right and left. young rangers dive after them and usually emerge grinning, clutching a turtle. we help tag the animals on the beach and smile into the sun as they waddle back towards the sea. It’s nice to know that here on Tetepare they, like all the other wildlife and plant life, are safe from human harm.