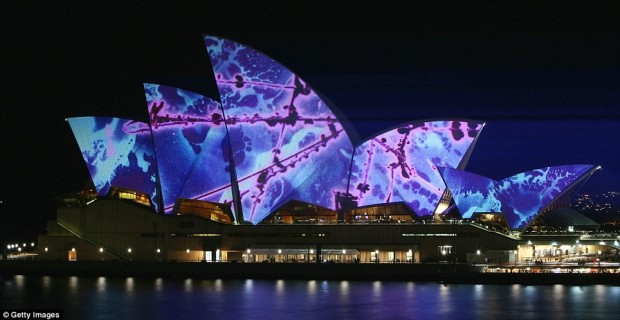 The Lighter Side of Art


Most of us consider light to be the stuff that fills the spaces, or illuminates the way. Not so to that rare creature called the light artist who views light as a tangible quantity offering itself up as the medium for sculpture, installation, sound, interactive design and performance art.

Beaming into radiance from 6pm every evening between May 26 and June 14 is the ‘Light Walk’, part of the Smart Light Sydney Festival, which is in turn part of the Vivid Festival.

While Brian Eno’s light art work on the sails of the Opera House may be the Light Walk’s most sizeable spectacular, those strolling through Sydney’s iconic harbour district after dark will find 25 other works shining forth from parks, walls, hilltops, forecourts and laneways. The Light Walk is free, as are the guided tours on Friday and Saturday nights from the Opera House.

A four-storey high pot of flowers will sway in the breeze at Cadman Park, while an interactive display of moving people will create a human flag in The Rocks. Walkers will be invited to participate in a pedal-powered light art installation at Circular Quay, or watch as a lit-up harp is strummed by the wind outside Sydney Conservatorium of Music.

The festival is for adults, kids, tourists and hardened Sydney-siders alike. It’s also a treat for those who still harbour a love for lights at night, Christmas-time or otherwise, says Artistic Director Mary-Anna Kyriakou.

“It’s about people experiencing wonder and magic within the city nightscape,” says Kyriakou. “Cities aren’t just about buildings, they’re also about atmosphere. I personally find light art to be immensely spiritual. When I turn on a light installation I can become mesmerised and immersed in it.”

The Smart Light festival encompasses a strong sustainability theme. It is being presented in partnership with the UN International Year of Astronomy 2009, which is about how smart city lighting can bring darker night skies. Sydney Observatory’s ‘Festival of the Stars’ will also occur as part of Smart Light, revealing the stargazing opportunities that even city-dwellers can enjoy if light pollution is reduced.

If it seems slightly counterintuitive for a light festival to boast a sustainability theme when its primary medium is one that burns energy, it’s something that participating artist Sascha Crocker also pondered when developing her collaborative installation piece, Lumenocity. Created specifically for the forecourt of Customs House, Lumenocity is a miniature of the Sydney CBD that people can walk through. The glow from the replica buildings accurately represents the energy use of individual CBD buildings.

“Lumenocity is as energy efficient as possible, plus we switch if off at night,” says Crocker. Lumenocity’s website (http://lumenocity.org/) points out that lots of the energy used by built environment lighting is given off as heat, or wasted by lighting unused spaces. But while the energy data the artist gathered could have been used to name and shame, Crocker and fellow artist and architects, Andrew Daly and Sean Bryen decided to make a “gentle point” instead.

“The light colours correlate directly to a map of the CBD but it’s not a confronting or didactic work,” says Crocker. “Direct comment can be good but sometimes it’s good to just make people question things.

Kyriakou is recording exactly how much power the festival will consume. She stresses the huge difference efficient lighting can make. “A single incandescent bulb burning for a single night in your house will consume the same amount of energy as some of these spectacles. We’ve got a lights-off policy too and have asked the businesses in the CBD and Circular Quay area to participate by switching off at the end of the day.”

With 30 years of involvement in public art behind him, Warren Langely is the artist behind Vessel of (Horti) Cultural Plenty. His huge swaying flower pot uses fibre optic cables and just three metal halide globes to create almost 200 metres of linear light.

“There are lots of dead zones in a city; this festival is a fabulous way to activate a precinct,” he says. “

While Langely’s previous artistic preoccupation was with glass he says he’s becoming increasingly enamoured of the unique attributes of light. “I like its properties of line and volume. We tend to think of light as the stuff that fills the available space, but it actually has an incredible ability to capture volume.”

Another of Langely’s recent preoccupations is cherry-pickers. “When you work on this scale, there’s always logistical issues,” he explains. “You have to consider how to get up high enough to fix the work, so cherry pickers and scaffolding become part of the job.”

“There’s probably only around 1000 architectural light designers in the world. And light artists? Not a lot. We’ve gathered the leading people in the fields of architecture, design, and light art.”

It brings a whole new meaning to the word ‘luminary’.

The festival also encompass the ‘Smart Light Symposia at UTS and ‘Licht’, an orchestral and light art interpretation of composer Stockhausen’s work at the Sydney Conservatorium of Music. Visit www.smartlightsydney.com for more information. depression treatment