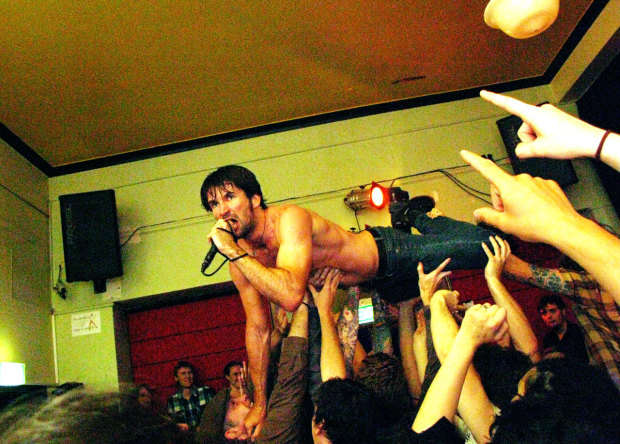 “If you’ve never witnessed a SixFtHick show you’ve either been living under a rock or you’re in jail for murder,” states Geoffro Corbett on the band’s MySpace page. “We are Canepunk. We got fangs. We are the king hit at the piss-trough of life.” Whether they’ve been pissed on by life, or they’ve pissed all over it, 700 “canepunk” gigs later and SixFtHick still play like deranged country hooligans with a point to prove in the big city. This is, of course, the point. Frontmen and brothers “Gentle Ben” and Geoffro grew up on a farm in Shitsville, Queensland, and they’ve milked their heritage for all its worth.

They buck out of the gates like a taser-gunned bronco. Before I can gulp down a few inches of beer in shock Gentle Ben is punching himself in the face, sweat already circling across his worn-out wifebeater. True to form, true to form, nod the grizzled old SixFtHicks fans in approval.

The music? Balls-out, garagey, rockabilly-tinged, dirty ol’ rock’n’roll. Close my eyes and, during the blusier moments, it’s got the space and swampiness of the Beasts of Bourbon. And oh my, it’s good to hear again. The Corbett brothers ain’t Tex but they shoot for the same early-man sexuality.

Neither play guitar. Last time I saw two dudes hit the stage with a couple of mics and idle hands was Horrorshow. Or Spit Syndicate. Or The Herd (but there was a whole bunch of them). Are the brothers aware of this strange hip-hop parallel? Perhaps. About halfway through the set, Geoffro introduces the band. “He’s the Chuck D to my Flavor Flav,” he sniggers, in reference to Ben.

But it’s perplexing that they’ve not yet been taunted into pitching in with at least a couple of power chords. Without instruments they look like two drunk punters who bum-rushed the stage 13 years ago and refused to fuck off. What’s so hard about the tambourine? Harmonica? Clap sticks? The spoons? After all, Gentle Ben ain’t no stranger to the rhythm stick. During one song he clicks into the microphone until he gets bored and windmills off into the night.

They compensate for the 20 wasted fingers with unhinged rockpig exuberance. One moment Ben’s slithering across the floor, the next he’s on his feet windmilling to the point of dislocation, or flipping from his back onto his kneecaps (ouch!). Next, he springs over to a table near the bar and jerks off his microphone into someone’s old beer. He’s half undisciplined Labrador, half neighbourhood drunk. Meaning, he’d win the wrestle but you could probably knock him out before it began.

It’s over 45 minutes later and it’s been fun! I’m already in admiration of The Nation Blue. Their decision to play with SixFtHick as support was brave. It might be different if it was the 21st time I’d seen them, not the first, but SixFtHick’s show is not really a support shtick.

‘Rising Waters’ from The Nation Blue’s eponymous new album is played across the PA before they come on. It’s two bent notes, repeated. That’s it. But it’s dark and suspenseful and works perfectly as an intro. Residual smirks left by SixFtHick’s silliness disappear. A little shiver creeps across me. This is going to be some serious shit, I think.

And it is. The Nation Blue are intense, relentless and loud. It’s impossible to remain impartial to the effort they expend and their authenticity. First up is ‘If Not For The Good Things I’ve Done’, the second track from Rising Waters. It’s one to play to the unconverted. It’s got the trademark Nation Blue intensity, duelling hardcore vocals and feedback screeches. It’s also got something of a hypnotic sea shanty rhythm, albeit a grim one. You could raise a sodden mast to this anthem, or at least dig some serious holes, if landlocked.

“For all I’ve known/All I’ve done/Take five at a time/To feign suicide.”

Another three songs pass before we hear the next track from the new album. This time it’s ‘Trespass’ with its bassline of simple descending beauty. The song displays a more refined, restrained side to The Nation Blue’s songwriting. They should write more like it because, in a live setting with studio intricacies trampled by volume, they risk sounding a little “samey”. A bit of light in the dark can be immeasurably helpful.

A lot of The Nation Blue’s lyrics are disturbed-adolescent dark but they pull it off with integrity. It’s the preserve of good punk rock, the ability to deliver raw lyrics, fully cooked. It becomes clear why SixFtHick were a good choice as support. There’s nothing playful about The Nation Blue; it’s all gravitas. Tom Lyngcoln swings his guitar behind his back repeatedly yet it looks more like ritual than showmanship. At one point, he’s so into the song he misses the mic altogether and the words get lost in a capella. It’s revealing. That he doesn’t know better makes me believe he’s still completely there in spirit, genuinely taken by the moment.

But Spectrum is too small for their sound. There’s little nuance in the mix and the vocals are impenetrable. The tracks they choose off Rising Waters, released in August, are wise but there are not enough of them. Of the 13 full-length tracks on the record, we only hear six. But hey, you’re damned if you roam too far into back catalogue territory damned if you don’t. And if Rising Waters is genuinely an exorcism of all the shitty things they’ve done, then maybe six songs is the maximum therapy they can muster in one sitting.

In any case, a treat’s in store. In fresh T-shirts, the Brothers Corbett are limbering up stage-side. The gesture is given and up they bound.

‘I’m Inbred’ is a masterpiece of simplicity. Straight punk rock, no frills, under two minutes in length. It channels the twisted outsider mentality of a guy with two heads and his hatred for city folk.

“I’m inbred, mother’s milk fed/You’re a fawn in crooked cross-hairs/Sunken instep, not a tooth in my head.”

This song should go far: it’s got Aussie punk-rock classic seeping from its sickened pores. It’s also got an uncannily similar drum roll intro to ‘I Fought The Law’ by The Clash. Extra bonus points!

‘I’m Inbred’ is also collaboration with SixFtHick on vocals, meaning there’s not one, not two but FOUR guys singing angrily. The Spectrum stage sags with sausage. The drums pound and they leap around having the time of their lives. I’ve seen five dicks on a stage before, but there is something especially sausage-y about this sight. It could indeed be the sausagiest moment I’ve witnessed yet – even some of the men around me appear a bit squeamish.

They cap it off by inviting yet another sausage on stage – SixFtHick guitarist Dan Baebler – to play the last song ‘Snakes’. Then, it’s over. No encore, no ‘I See Colours’, nothing.