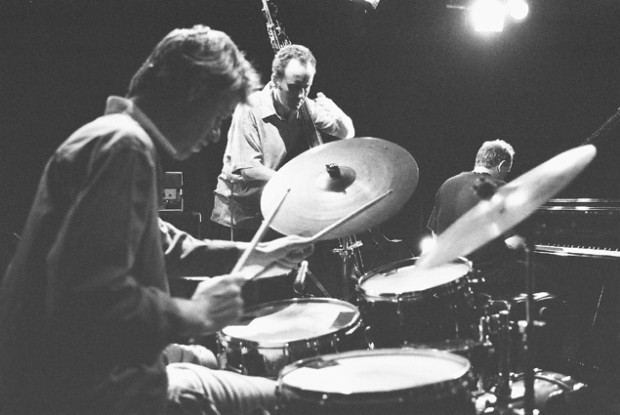 First published in The Quietus, February 2015

Next week, The Necks, the Australian trio of Chris Abrahams, Lloyd Swanton and Tony Buck, are heading back into the studio to record their 18th record. “We have no more idea what we’re going to do than you do!”, bass player Swanton tells us.

Likewise, this not knowing extends to each other, when the band walk on stage. It’s hard to believe when you’re in the thick of it – eyes closed, head in hands, lost to yourself – but when asked if The Necks ever rehearse parts of their famed live sets in advance Swanton is categorical: “No, never”. Of course it’s no surprise that music that is entirely improvised can be intense but The Necks’ uninterrupted hour-long sets are so seamless and un-meandering – ploughing everyone, by un-pin-downable increments, towards some sort of revelation of spirit – that it does seem freakish that it’s all created on the fly. Freakish and magical.

The Quietus have kindly been given a first look at a concert film, courtesy of Danish music web channel Unseen Recordings, shot at the Jazzhouse in Copenhagen in October last year, to mark the band announcing a run of European dates in April – take a look at the foot of the piece. If you’re yet to see them, you really should. The film provides a good inkling of what the live experience is like for those who haven’t; for those who have, it’s a chance to try, and fail, to scrutinise how the trio make it happen every time. In this interview, Swanton refers to the band’s retirement – yes, he was being flippant and no, it’s not happening soon – but it did gave me a strange little throb of panic to think that one day neither I, nor anyone else, will be able to see them play live anymore.

Please continue reading this interview over at The Quietus