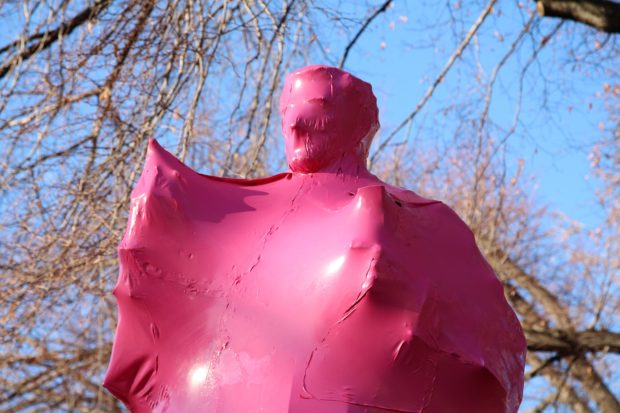 The ‘queering’ of Hobart’s monuments

First published in The Guardian, June 2016

Taped to a wall at Long Gallery in Salamanca Place in Hobart is a 2005 essay by historian Marilyn Lake about Tasmanian monuments. Key sentences are marked in highlighter.

“For God and Empire. King and Country.”

“There are no statues of women in Tasmania.”

“… celebrating as often as not, manly duty nobly done.”

“A statue of Dr William Crowther looms over [Franklin Square] … the medical scientist is remembered for presiding over an inhumane traffic in Aboriginal remains.”

Outside, Hobart’s waterfront teems. Dark Mofo lures tourists to town and locals from their winter lairs. Nearby is Parliament Lawns and Franklin Square where, on festival eve, Sydney artist Cigdem Aydemir ascended in a cherry-picker armed with a heat gun and a roll of thick pink plastic to shrink-wrap five monuments in a process she calls “queering”.

The first queered statue I see is Abel Tasman, at night, before I know it’s an artwork. The waterfront has a work-in-progress feel due to the festival, and Tasman’s wrappings suggest impermanence too. Vandals have clawed the plastic off his lower half so he looks vulnerable and vaguely indecent. “Queering could mean lots of things,” says Aydemir from Long Gallery, the headquarters for her installation, Plastic Histories, which was inspired by Lake’s essay. “In this context it’s about making the monuments strange or odd so you notice them in a way they didn’t intend.”
Or even just so you notice them at all.

At Franklin Square I meet a born and bred Hobartian who is stumped as to the identity of the pink figure in the fountain. “I think it’s Collins?” she says. Pretty close. David Collins was the founding lieutenant governor of Van Diemen’s Land. This is a later governor, John Franklin; the statue was erected in 1865.

You can’t really blame her for getting it wrong. The statues are wrapped head to toe to plinth, covering their plaques and inscriptions. More shroud than shrink-wrap, the plastic extinguishes most distinguishing features. Aydemir could be accused of obscuring the men’s VIP identities, and she is – but was anyone looking to begin with?

I’d hazard few now pilgrimage to the fountain to admire Franklin’s eyeglasses and epaulets; he’s been there for 150 years. Familiarity breeds contempt. We’ve ignored him into invisibility, which seems fair given the invisibility of women and Indigenous Australians in the island’s statue scene.

These statues may be invisible but they are still here. With their beards, trouser bulges, barrel chests and supercilious stares. Casting their male gaze in perpetuity over Hobart’s public spaces. Until they were queered, that is.

Though pink, the men do not appear fun, feminine or gay. Some look spookier than others. Stretched from his bewigged head to his outstretched arm, the plastic encasing Tasmania’s former premier Albert Ogilvie puffs into a kind of batwing webbing around his torso.
It’s not a great look for Albert (who, it should be said, abolished state school fees, restored public service salaries and increased unemployment relief). Ensnared in pink, with no space to gesture into, the statue’s self-important civic bombast is frozen in farce. Shiny hot pink farce, bloated as a body bag. Around his shrink-wrapped head, leafless tree limbs dwindle into twigs, fracturing the glare of the white winter sky. Interest (and disgust) piqued, I return to Lake’s essay to learn more about another celebrated man: Dr William Crowther. “When the body of William Lanne lay in the morgue, Crowther reportedly cut the corpse’s head off and replaced it with another,” she writes. Lanne’s family is believed to be the last Aboriginal family to live a traditional life on mainland Tasmania. “Even after the body was buried in St David’s cemetery, Crowther was involved in its removal and further desecration.”

I’d not seen Crowther’s statue before. He was in my blind spot because I was bored by the ubiquity of pompous male monuments, not because I’d actively averted my eyes to deny his statue its sole goal of being regarded. Either way, Crowther is still here, being commemorated. His mutilation of Lanne, and presumably other Tasmanian Aboriginal people, is here too, and always will be.

Crowther can’t simply become an invisible man; his monument in Hobart is still important, but only when audiences are informed of the full, brutal picture. If statues like Crowther’s remain as half-stories in our public spaces, justified as relics of earlier times when “things were different”, that would indicate that their presence has no impact or influence. But if monuments are passive, why did invading US marines topple Iraqi president Saddam Hussein’s statue and lug it away?

Aydemir uses a light hand to deal dark topics, allowing you to look and relook, think and revise. Even casual onlookers are confused into contemplation, however fleeting. “I’m not interested in making work everyone will like,” Aydemir says.

Many don’t. On the Hobart Mercury Facebook page are comments like: “I couldn’t believe my eyes on seeing what had been done to these statues … I found it very disrespectful” and, “We can’t have anything nice displayed in public anymore without some skunk ruining it.” A woman suggests a spotlight be used to highlight the monuments instead of what another calls “ridiculous pink condoms”.

I suspect the work taps deeper fears and fragilities, shaking up an unspoken sense of safety that is anchored to the idea of inviolable public space. A bunch of kids spraying graffiti on a wall is one thing, but this state-sanctioned disruption? The Museum of Old and New Art is viewed by Tasmanians as being a very powerful force – and if it can blithely mutilate monuments “all for the sake of Dark Mofo” (as one commenter bitterly stated), then what is next? The cliche “is nothing sacred anymore?” is filled with more fear than lament.

On Dark Mofo’s final day, I wander alone in Long Gallery. Swinging from the ceiling are pink plastic busts, cast from former works. Some have holes where the eyes should be. They are hollow, phantoms, identity-less.

On the floor is pink tape mapping the outlines of the Hobart men’s bodies. It looks like a crime scene but I step into their bodies anyway, inhabit their emptied core and privately complete the queering.