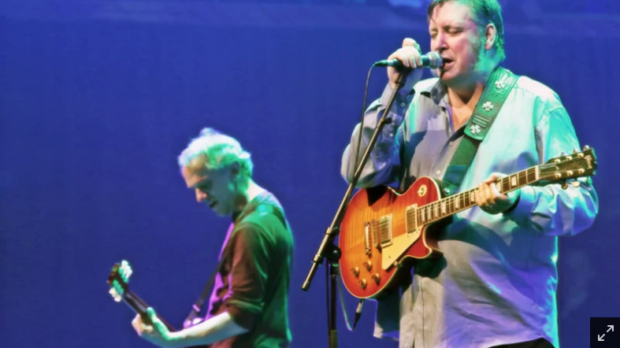 When the Sunnyboys reformed last year under the pseudonym Kids In Dust to play their first gig since 1991 at Dig It Up festival, the show both satiated and stoked the appetite of fans.

Sunday night marked the band’s fifth headline show since then but the sense of special occasion is undiminished. This was the Sunnyboys’ first Sydney show since Dig It Up and the first using their real name – a name they now inhabit proudly, using Here Comes The Sun to herald their arrival onto a stage decorated with sunflowers.

Several hundred people had arrived early to see The Sunnyboy, a documentary charting the mental-health battles of singer, songwriter and guitarist Jeremy Oxley. The film’s action finishes just after Dig It Up, gently depositing the story at our feet to be carried into the Concert Hall and continue its narrative under our stewardship.

It took just two songs of frustrated seat dancing and the opening chords of Tunnel of Love for one, two, then three pockets of people to stand and dance, followed by the rest of the room when they played Happy Man.

Mums danced with sons, dads danced with daughters and strangers danced in the aisles. Few danced well, abandoning their bodies instead to the kind of joyful flailing that’s stirred up by the Sunnyboys’ bright, brisk sound and invigorating tempo changes.

Bassist Peter Oxley seemed lost in boyish exuberance and, while his brother Jeremy didn’t return every grin, he returned enough to assure us he was having fun. Meanwhile, guitarist Richard Burgman strutted, beamed and bantered and drummer Bil Bilson was full of smiles too.

The crowd chimed in on the harmonies that make songs like My Only Friend so simple and sweet and sang every word to Alone With You. Yet there was no sense Jeremy Oxley felt his ownership slipping from songs that set sail in the early ’80s.

“I feel like my music was stolen from me,” he said in the documentary. “And I wasn’t able to get back what I lost.”

Two encores later, we exited to a second Beatles song, All You Need Is Love, feeling that this time the exchange of pleasure over these songs was entirely reciprocal and that together we’re helping to return to their songwriter the parts of himself he lost.