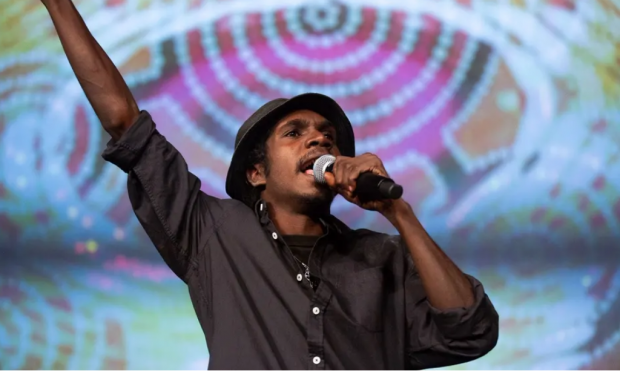 The ‘Yolŋu surf rock’ of Yothu Yindi’s next generation 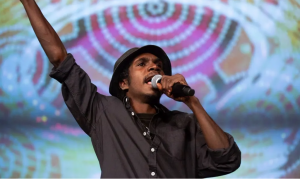 The music of Yothu Yindi, says King Stingray guitarist Roy Kellaway, is in his blood. He and the brand new band’s singer, Yirrnga Yunupiŋu, grew up together as wawas (brothers) in the north-east Arnhem Land town of Yirrkala, population circa 800, on Yothu Yindi’s homelands – Yolŋu country.

Roy is the son of Yothu Yindi’s bass player, Stuart Kellaway, and Yirrnga is the nephew of its frontman, Dr M Yunupiŋu. Both were born in 1996 and toddled around side-of-stage at gigs. A few years later they were kicking up a cloud of dust with other kids, darting between onlookers’ legs, quicksilver-fast, as Yothu Yindi played the Northern Territory’s thriving annual program of remote community festivals, including Garma and Barunga.

For a while, Dr M was the principal at Yirrkala school and Stuart Kellaway was the music teacher. After the bell rang Roy and Yirrnga would kick a footy around at the oval with local kids including Dimathaya Burarrwanga, who is 24 years old now too. Burarrwanga is King Stingray’s all-rounder percussionist (he can also sing, dance and play guitar and yidaki) and, with Campbell Messer on bass and backup vocals, King Stingray had a Splendour in the Grass slot and dates on the east coast booked for 2020.

Of course, that never happened – so instead, Roy and Yirrnga have been deep in songwriting, and their single Hey Wanhaka is out on Wednesday on Bargain Bin Records, the Queensland-based label of the Chats, in a style they call Yolŋu surf rock.

“Everyone in Yirrkala and the Northern Territory are massive Yothu Yindi fans but the music hits Yirrnga and I in a different way,” says Roy from his Brisbane home. (Yirrnga was called away on family business and couldn’t join the interview.) “When we listen to Yothu Yindi songs, it’s nostalgia in its purest form, it really gets to us. We’re like, ‘Oh, man, imagine what this would’ve been like for them as young fellas?’ My dad would have been younger than me when Treaty was blowing up.” 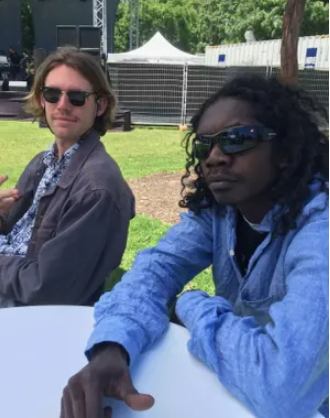 Dr M adopted the Kellaway family as his kin in the 1990s. “Dr M by kinship is my dad’s brother and I call him bapa, father. So I had two dads playing in the band! I call his wife Yalmay [Yunupiŋu] amala, which is mum. She’s an amazing, incredible woman. Her daughters and my sister, we all grew up together. She would always talk to us full Yolŋu matha, no English, to make sure we learned.”

Talking to Roy about his unabashed Yothu Yindi fandom, it’s easy to forget something pretty crucial: both he and Yirrnga perform in the band now too, as guitarist and lead singer respectively. They joined three years ago at a show Roy says made him so nervous he shook. “I never get nervous with music stuff, it was so weird. For both Yirrnga and I, it was a really big moment to go from looking at this band in awe to being on stage.”

Yothu Yindi’s comeback saw them play Waitangi Day in Auckland, Bluesfest and the Commonwealth Games opening ceremony. The “coolest”, says Roy, was their show at Adelaide fringe festival with Pussy Riot. “They are such powerful activists and being a part of something so politically strong was very special for me.”

But King Stingray is about strength through celebration – they’re not writing protest songs. “We’re still fighting the good fight but we’re not ‘poor bugger me’, you know? We want to celebrate culture and uplift people. Being young fellas from the bush we like to play rough and loud – surf music and rock music. One of Yirrnga’s favorite artists is Warumpi Band – you know, upbeat rock tunes.”

Hey Wanhaka means “where you going?” in Yolŋu matha, but also “what’s up?” or “what’s happening?” Which is to say, you hear it a lot on Yolŋu country. True to its translation, the song has a colloquial swagger and a sense Yirrnga is greeting anyone who’ll listen – and even better: those who won’t – with his confident shouts of “hey!” Roy’s clean and pretty guitar soars into the song’s ample space, with the yidaki droning along in the undergrowth. It feels young and irrepressible but is also a trojan horse for the aural intensity that this line of Yunupiŋu men convey with their penetrating manikay (traditional song), which propels Hey Wanhaka into a powerful outro.

“Yirrnga is a proud Gumatj man and for a young fella to get the call up to be the front singer for Yothu Yindi comes an element of leadership,” Roy says. “ I feel he’s got a message to get across to the world to celebrate the culture of this tiny part of Australia.”

As humble as they are, King Stingray have global aspirations. He and Yirrnga recently found some “classic footage” of Yothu Yindi on the road on a homemade VHS, filmed by band members. “It was so exciting for us to watch, seeing them at such a young age, playing and sharing stories around the world. We’ve always wanted to do that so we thought, ‘Let’s just have a crack.’”

From music teacher, to mate, now as bandmate – Roy’s dad, Stuart, has been a lifelong mentor for both men. “My dad’s very relaxed, very chilled and very supportive,” Roy says. “When you’re young and impressionable, you’re always thinking about what your peers might think … He instilled this motto into me and Yirrnga of ‘loud and proud, wrong and strong’. I’ve always really liked that.”