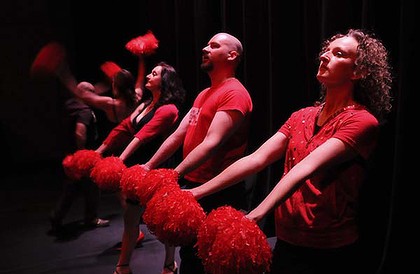 First published in The Brag, September 2009

There’s a tendency to steel yourself prior to a play about sexual violence; to assume you’ll leave feeling battered and brutalised, just as a victim of rape does. The topic is often treated with gruelling heavy-handedness, like this were the only fair way to communicate the devastating impact of sexual violence.

This Kind of Ruckus does none of these things. Theatre group Version 1.0 claims to want to “get conversation going in the bar afterwards”, rather than bludgeon its audience with rights and wrongs. And this it does.

The play eschews discernable narrative and character for a miasmic collection of anecdotes, dancefloor tableaus, movement sequences, video projection and therapy sessions. Scenes are repeated – a seductively-clad woman gyrating on a dancefloor; a man staring darkly at a woman passed out in front of him – and build on each other to mesmerising effect.

The video projection dominates the set and creates an atmosphere of perversity and menace. Some scenes are stark and dialogue-based: miss one shift in the verbal power play between the couple dueling it out in therapy and the scene slips from your grasp. Other scenes are pure movement: brilliantly acted by the two male actors Arky Michael and David Williams. In one sequence, the men begin at the back of the stage, faces blank, arms dangling limply by their sides as they jerk forward like two Neanderthal rag dolls. It’s cartoonish, primitive and sinister.

But with meaning firing from so many different mediums, it’s a difficult play to sink into. I was never quite sure whether to listen, watch, feel or simply absorb. And, ironically, among the mix, I found the simple anecdotes the most moving, illustrating the horrifying way our own words can be used against us.