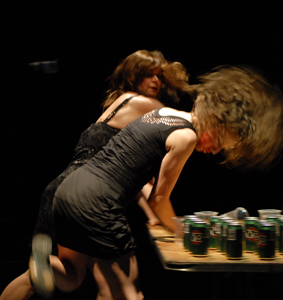 This kind of ruckus

First published in The Brag, August 2009

When the Matthew Johns sex scandal re-emerged this year Australians became polarised around the issue of sexual consent. For many it was black and white. If no means no, yes means yes. Others were deeply disturbed by shades of grey. No always means no, but yes doesn’t always mean yes, they objected.

Lots of women found it difficult to articulate their unease and commentators of both genders dived in without most, or any, of the facts. Semantics became suddenly important. Was it “group sex” or “sexual assault”? Everyone had an opinion.

Sydney-based Theatre Company Version 1.0 was observing the drama with interest. Contemporary Arts centre Performance Space had commissioned Version 1.0 to create a piece of theatre and, by late 2008, the group’s research into domestic violence, specifically the rehabilitation offered to perpetrators, was well underway.

As the football scandal unravelled in 2009, however, Version 1.0 shifted its focus. A multimedia performance piece about power, gender and violence emerged, called ‘This Kind of Ruckus’ and claiming, unsurprisingly, to be “confronting, unsettling and powerful”.

“It shifted [away from domestic violence specifically] to that questionable and hotly-debated topic of what is acceptable behavior,” says Version 1.0 performer and deviser, Jane Phegan. “We used the football scandal as a starting place to examine the behavior there and then brought it back to look at society’s behaviour more widely.

“It’s confronting because it deals with violence, gender and power and that’s always going to be difficult to engage with. It’s loaded and it’s ugly and we delve right into the centre of the ‘grey area’ to question issues of consent.”

But it’s not an awareness piece, says Phegan.

“You already know it’s really horrible for a big boofy man to punch a small woman in the face. We’re trying to highlight what’s not so obvious. Whose responsibility is it when a young woman is faced with ten big men in a hotel room?”

It’s a good question. Karen Willis, Manager of the NSW Rape Crisis Centre, explains rape prevention has “moved on a bit” from no means no.

“Telling a sex offender ‘no’ usually has no impact,” she explains. “In fact making women responsible for managing the bad behaviour of that small group of men who are sex offenders has not worked.

“The sorts of things we talk about now is men standing up to other men who express values or views which degrade or humiliate women. It is this culture which, at the pointy end, gives permission for that small group of violent men to be violent. The idea is to encourage men to take responsibility for changing men’s culture and behaviour.”

In July, a controversial comment in the South Australian District Court by Judge David Smith provided more fodder for Version 1.0. The judge suggested the case – where a woman feigned sleep or passed out (it’s still unclear which) and was “digitally penetrated” by the defendant – was one of “technical rape” and therefore undeserving of a jail sentence.

“Is that OK, or not OK? It’s not so obvious to a lot of people,” says Phegan.

“We’re not saying what’s right and wrong, although at times our opinion will be pretty clear. We just want to get conversation going in the bar afterwards.”

Version 1.0 use a collaborative rehearsal process, where actors are also “devisers”, and sound, video and lighting artists are involved from the beginning. As such, these elements are woven organically into the fabric of the performance, not grafted on towards the end, says Phegan.

“It’s quite beautiful and also incredibly ugly,” she says. “The beauty lies in the set and wonderful video work and it’s quite stunning in that sense. And there’s humour too. As with looking truthfully at anything that’s painful, there’s always comedy that comes out.”