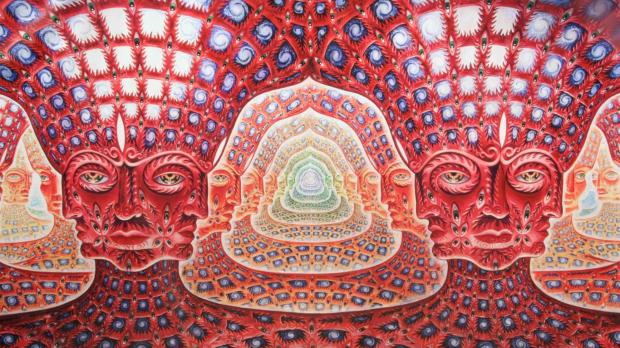 First published in the Sydney Morning Herald, May 6, 2013

“Think for yourself. Question authority.”

A stern-faced Timothy Leary booms and looms from enormous video screens, kicking off tonight’s sold-out show by telling 20,000 Tool fans how to stick it to the man.

Question authority at Allphones Arena, though, which operates on the Orwellian side of well-oiled, and you’d be ejected before you could say ‘Stinkfist’.

To rabid fans – most of whom are male if tonight’s ratio of 20 men to one woman is a yardstick – each Tool album over the LA band’s 23-year career has evolved their sound.

As is his ritual, Keenan stands silhouetted in the shadows. With no frontman between them, guitarist Adam Jones and bassist Justin Chancellor look miles apart yet their guitars merge with industrial precision.

The show advances like an enemy tank – all intelligent design and impenetrable exterior – with no banter and few pauses, barring a 12-minute intermission. There are no heroics. Tool eschew showmanship for an almost business-like attitude that lets the music carry the action.

Instead of band close-ups, the screens display a visual spectacular fixated on Prometheus-style alien characters in varying degrees of torment. Even if horror-movie cinematics are not to your taste, and you weren’t one of the fans furtively spliffing outside, the show is arresting.

And even if, like me, you suspect the visuals would be better pitched to a wide-eyed adolescent, resistance is futile. It’s easier and it’s funner to just enjoy the ride of a show that’s ultimately a wonderful blunder of contradictions.

The themes are anti-authoritarian but the venue is rule-bound; the musicians deflect attention but the visuals demand it; the music encourages head banging while the time signatures defy it; and people paid hundreds for tickets but Tool don’t play ‘Sober’.

And, when they close with ‘Stinkfist’, the song’s nightmarish video of maggot-like succubi is concluded by a festive cannon-blast of gold glitter, hinting at the biggest contradiction yet: Tool, seemingly so serious, actually have a sense of humour.