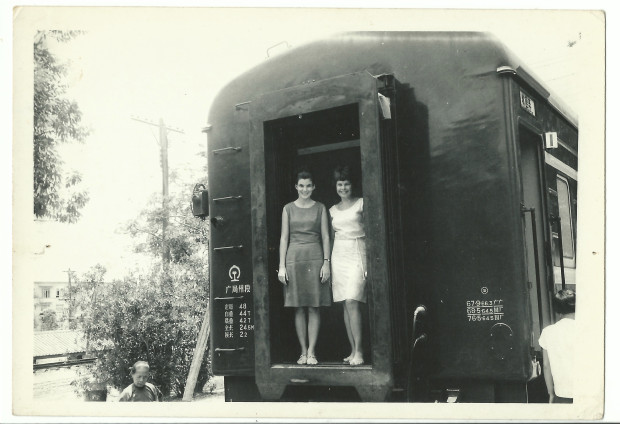 “Listening to people speak … I must be one of the bravest people in the world. But … we either had to get to London cheaply or come home.” Denise DeLacy, postcard, 1967 (Now Denise Hennessy, my mother) Beginning of the trip, Hong Kong

In 1966 I travelled from Hong Kong to London by train. I was 22-years-old. My passport is stamped June 1 at LoWu, two weeks after Chairman Mao issued the May 16 ‘notification’ which began the Cultural Revolution.  I’d like to say my companion, Leonie, and I marvelled as we watched these momentous events unfold. We didn’t. Our naïveté was staggering but it also kept us safe.

I grew up on a tobacco farm in far north Queensland. During high school I boarded at a Country Women’s Association hostel and trained in Brisbane before returning to teach at a rural school.

Leonie’s boyfriend’s was half-Chinese which piqued our interest in Asia. In March 1966 we boarded a ship from Brisbane for Yokahoma. There are no words to explain my shock. I didn’t have a television growing up. I knew my history and geography but had little visual knowledge. Tokyo was so big and high and had so many neon lights. Raw fish came in little bowls – I was used to ‘meat and three veg’ on big plates.

In May, we sailed to Hong Kong, still a British protectorate, where we planned to work. But Leonie didn’t get an interview so we decided to go to London. We had no money to fly or sail. Walking in Kowloon one day we saw an ad for a train to London for 34 pounds sterling. We paid on the spot. It was a non-class system so the tickets were called ‘soft seat’. I missed the train from Kowloon but Leonie got on. I had her passport and vaccination certificates. I boarded the next train to the border of mainland China at LoWu. Hong Kong officials escorted me across a bridge and I was met halfway by the Red Guard. Leonie was in a waiting room surrounded by guards because I had her documents. They were going to give her injections!

Looking back, the revolution was all around us. There were no other westerners and loud-speakers blared propaganda on the train. We saw people streaming in from the communes in old trucks with red flags. But just as vivid in my memory is my first Chinese meal with ‘fungus’ in it.

In Peking we stayed at the only hotel for foreigners and were escorted to Tiananmen Square to see the propaganda film ‘The East Is Red’. People were flooding into the square too. Now I know they came to hear Mao. It was the lead-up to the Sino-Soviet split. Mao – a fundamentalist – believed Russian Premier Nikita Khrushchev was a revisionist.

We went to the Soviet Embassy three times by rickshaw for our papers but they wanted passport photos. We had no way to get them. The third time we went, the official yelled, “Go! Just go!” The embassy closed a week later. He had bigger problems than us.

In Moscow our cab driver asked for our papers. At the hotel, he took our suitcases out and then ran. Now I know it was because we had no papers, it was the middle of the Cold War and he was terrified. The concierge asked too. The hotel rang the Australian High Commission and, later, said we were vouched for. The next day we got our papers and a beautiful Moscow guide who took us to the Red Square and The Bolshoi Ballet.