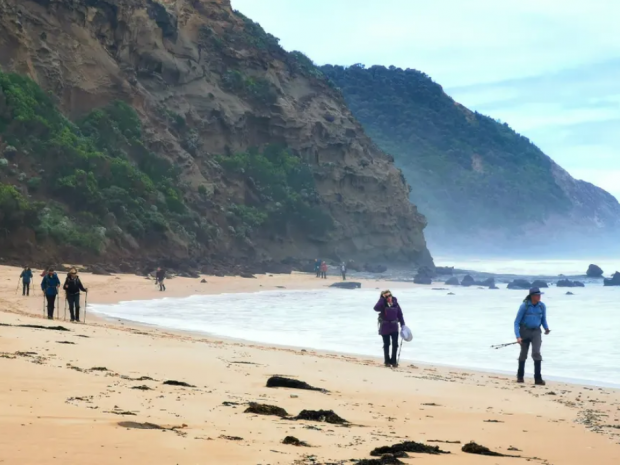 Trekking the Great Ocean Walk: ‘Stand with no land mass between your sweaty skin and Antarctica’

Darting and bobbing on spindly pink legs, the hooded plover places pebbles, seaweed and other beach debris around its nest at the high water mark on Johanna beach. The decorations will do little to deter birds of prey, off-leash dogs, human feet and other threats to the eggs and to the fluffy, sandy-brown juveniles that hatch.

There are just 1,000 or so hooded plovers left, estimates area chief ranger for Colac Otway – Parks Victoria, Carl Gray. “It’s probably as close as you’ll get to a threatened species in your life,” he says. 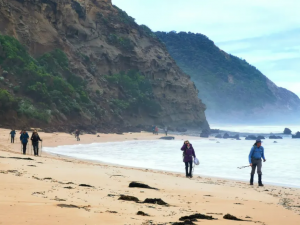 Johanna beach is the halfway point of the 110km Great Ocean Walk. Despite being one of Australia’s iconic long-distance coastal walks, most Australians haven’t heard of it, even in Melbourne, which is just a few hours from Apollo Bay where the full seven-to-eight-day trek begins. The Great Ocean Road, meanwhile? Oh yes. Everyone from Brunswick to Beijing has heard of that, and most have driven it, mainly to see the 12 Apostles.

But you won’t see the Otway black snail from a car. Endemic to the area and with sharp, backward-pointing teeth, you’re most likely to see the carnivorous snail locomoting through leaf litter on day one as you walk inland from Apollo Bay through the Otways’ temperate rainforest of towering mountain ash, giant beech and lush fern gullies. Glow worms thrive in this moist bushland too.

After hiking through the forest, the terrain changes. The next six or seven days (it depends on your speed) are along the undulating strip of the Great Otway National Park that fringes the coastline. This is beautiful Eastern Maar country, teeming with tea tree, xanthorrhoea forests, bush tomato, seaberry saltbush and headlands carpeted in Victoria’s floral emblem, the pink heath. It’s only on the final day, after you cross the Gellibrand River into Port Campbell National Park, that the 12 Apostles (now just eight) loom Instagramably offshore.

It’s possible to do the entire Great Ocean Walk as an unassisted camping trip. Unlike a lot of Australia’s more remote long-distance trails, there’s car access at several points, so food drops can be arranged. Splurging on a guided walk with accommodation rolled in, however, means you’ll have a light pack, no meals to deal with and have raincoats, backpacks, walking poles and gaiters (for protection against tiger snakes and brown snakes) included.

The Australian Walking Company version is a “highlights reel” of the final four days of the trail. The 46km walk begins at Castle Cove lookout and has dedicated accommodation for walking parties at 12 Apostles Lodge in Johanna. Our small group is returned to the lodge each afternoon for a foot spa among the trees, a glass of Victorian wine, dinner at a communal table and a fire pit for night owls. The lodge is family-run. So much so that I find pebbles in my foot bath, put there by the resident mischievous toddler, Luna.

One of our guides, Jamie Brown stops us in a shaded forest nook on the first day to acknowledge the Gadubanud people. “They managed it so it’s as pristine as we see it now,” she says. “They did a phenomenal job. Look around and say your own thanks.” 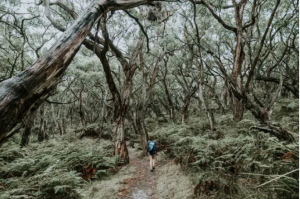 Ngootjoo, Ngootjoon means “all is well, all is healthy”. Yet it’s not entirely true. At several points, boot washing stations block the path. One by one, we step onto the submersible steel platform and douse our boot soles and the tips of our walking poles in frothy liquid that kills any cinnamon fungus spores we may be carrying in. The fungus rots the roots of grass trees; the few diseased plants we see are wilted and brown.

Elsewhere, blackberries rise in a thorny tangle. Weeds thrive on and around cleared land and the Otways’ history of logging, bushfires and present-day agriculture has taken a toll, with lots of dairy farms bordering the park. Growing numbers of farmers, however, are working with environmental organisations such as Landcare to improve their practices.

“A lot of landholders are revegetating parts of their properties to add to wildlife corridors,” Gray says. “This modern way of looking at farming, where you try to increase your biodiversity, is more and more common.”

Our guides check the tides for each day so beaches are accessible. I’m usually the beach grinch, found admiring the plants while others glory in a classic coastal view. Not on this walk. Perhaps it’s the moody weather but the beaches on the Great Ocean Walk have a kind of exhilarating end-of-the-world bleakness. I drop back to walk alone and with no markers of era in sight, it could be a hundred years ago; a thousand. The sense of being unmoored from time satiates some abstract yearning I didn’t even know I had.

Kelp as black and glossy as Batwoman’s suit is looped along shore pools filled with strange and perfectly smooth stones, while the eroded rocks at Milanesia beach protrude from the sand like pagan fertility figurines. Dinosaur footprints are visible here, as well Australia’s oldest-known bird tracks from the cretaceous period, 105m years ago. At Wreck beach, meanwhile, two huge rusting anchors poke wearily from the sand, one of them a relic from the Fiji, which smashed ashore in 1891 on its way to Melbourne from Hamburg.

We feel little of the southwesterly wind that pummels this coast, mainly during winter, but its force is imprinted in the wind-pruned scrub and sloping, stunted trees. Parts of the track are steep but the path is firm, flat and grassy with the exception of some loose gravel downhills. Relief comes at high points where a sudden breeze rushes in and you can stand, arms outstretched, with no land mass between your sweaty skin and Antarctica. We see gang-gang cockatoos (the Black Summer bushfires toppled this once-common breed towards nationally-endangered status) and wedge-tailed eagles swooping low. 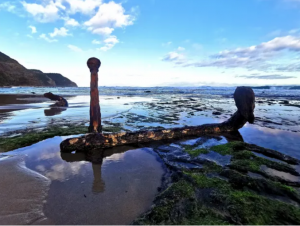 “Can anyone remember when they last walked alone in the bush?” Brown says. She’s initiating us into the company’s solo walk practice, where they allow only one of us to set off through the stringy bark forest at a time. “Walk at your own pace, open your ears and your noses to what’s around,” she says.

All walking companies should steal this trick. Not only does the physical separation stop the small talk that we are socialised to produce and consume, it focuses our attention in a mindful way on the silence. And then – in a rush of birdsong and wind whooshing through the tops of trees and the pound of waves on the shore – on everything that isn’t human that fills the silence up.