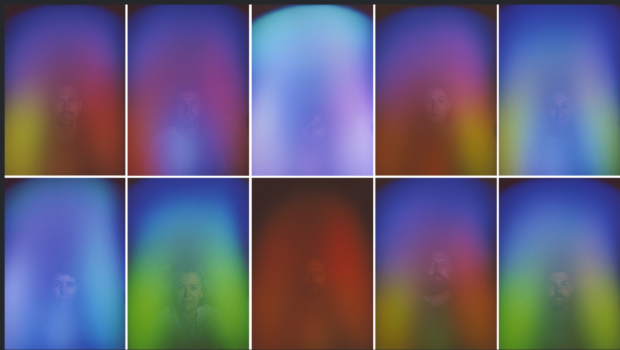 First published in The Monthly, January 2020

“I’m going to tell you about the colours in your aura portrait,” says artist Kate Mitchell. She holds the Polaroid by its edges as I materialise face-up from the depths like a drowned woman surfacing a noxious algal bloom. “What is visible is a lot of orange,” says Mitchell. “You’re bathed in it.” I’d seen one of Mitchell’s portraits on a friend’s Instagram. Her face was radiant amid a diaphanous drift of celestial white and violet. Yet here is mine, on December 10, mired in bushfire-coloured murk, as if my aura had sopped up the overflow of Australia’s collective consciousness. Snuffed-out skylines may be the new normal now, but then the dread was fresh and deep.

Ringed by fire, Sydney had woken to its smokiest day yet. As the air quality index fell 12 times below the hazardous threshold, employees filed from evacuated buildings to a water view from Barangaroo that looked like a very bad day on the Yangtze. Foghorns blared; then the ferries stopped altogether. The absence of shadow made sound less crisp too, as if a blanket had been tossed over our senses.

Mitchell’s goal with her Carriageworks-commissioned work, All Auras Touch, is to display the aura portraits of 1023 Australians according to the 1023 jobs included in the Australian and New Zealand Standard Classification of Occupations list. “It’s a hugely outward-facing work because its completion relies on the public participating in it,” she says.

She will need a slaughterer. A sex worker. A meat boner and slicer. A shearer, a shot firer, a magistrate, a gastroenterologist and a zookeeper. A yarn carding and spinning machine operator.

I am job #714, a print journalist, and my orange aura signifies “a hugely optimistic” energy. “There’s a kind of anatomy to the images and it shows optimism in your recent past, your present tense and your close future,” Mitchell says. Her 2IC on the project is the AuraCam 6000, an electromagnetic camera invented by Guy Coggins in Los Angeles in the 1970s, and her interpretations are taken from his original material. “You’ve been dialled in to a level of optimism, irrespective of what’s been going on.”

It’s pseudoscience, sure, but actual science has scanned more like the Old Testament lately: in our tiny South Coast holiday town, where life is simple and sweet, it’s reported that fires are burning with such ferocity they’re creating pyrocumulonimbus clouds with the potential to unleash thunder, lightning and soot-encrusted hail. Our annual sleepy hollow, suddenly a song of ice and fire. It’s a truth that’s less plausible than my energetic colours expressing something of my essence. At least the pseudoscience comes with a guarantee that all news is good news.

Coggins has claimed that the camera’s “biofeedback aura imaging technology” gives “everyone the ability to see auras … to help gain deeper personal insight”. Whether it fulfils these claims or not is irrelevant to Mitchell. “I’m not trying to prove auras exist, or to prove the validity of the AuraCam,” she says. “I’m a conceptual artist and my practice is ideas. The portraits are a visual device to talk about the many ways we exist, about consciousness and energy.”

And about work. Mitchell is “obsessed” with it – and so are we, she says. “It’s what we spend the majority of our lives doing. There’s very little about us that isn’t related to work. So to investigate work means to better understand things like failure, success, value, physicality and the language of particular industries.” Are we what we do? More specifically: does our work and our essence as humans (as represented by the AuraCam 6000) intersect? Reflect? Contradict? None of the above? It’s a question that meanders into consideration of the pursuit of happiness. Of Marxist notions of labour and how it transforms according to the political economy in which you toil. Of spiritual convictions of fate and divinity. It’s a complicated question, then, but a child could follow its gist. What do you want to be when you grow up?

When the exhibition opens on January 8, Mitchell’s goal to hang 400 portraits is achieved. It’s a transfixing sight. 1023 rectangular boxes are arranged in a vast colour spectrum along three long walls. Filling 400 of the boxes are the completed portraits. As polaroids, they glossily reflect your gaze. Printed on A2-size heavyweight matte paper, the portraits are plush velvety portals you feel you could disappear into.

The remaining 623 boxes display the names of occupations Mitchell is yet to photograph. While the job titles seem stiff and bureaucratic – insurance loss adjuster, patents examiner, construction estimator – the font is fun. It looks to have been spat from a Commodore 64, with the grid pattern evoking the retro video-arcade vibe of 1980s games like Pac-Man and Battleship, or Gillian Rubenstein’s 1985 novel, Space Demons.

The “fire fighter” box has no portrait, although Newtown Fire and Rescue Station is just a few blocks away. “If it remains at the end, I’ll be like, ‘thank you so much for doing your jobs’,” says Mitchell.

Her work is part of the data visualisation movement, where artists make large data sets resonate, and her timing is uncannily good. We’re transfixed by visual data right now; our safety relies on it. We’re glued to fire apps and maps, to rain radars, Doppler radars and the air quality index. To new symbology such as the Bureau of Meteorology’s dotted lines to forecast smoke haze.

Despite its best efforts to the contrary, the Australian Bureau of Statistics’ occupations list is a fascinating text. It’s printed as a navigational tool at Carriageworks, flapping about at roughly the size of a Senate ballot paper, with something both quaint and irritating in its quest to classify the unruly world into submission with its fiddly taxonomy. The list is described as “including all jobs in the Australian workforce”, yet “artist” is not listed. Mitchell was only able to participate in her own work because she’s an art teacher too.

“I’m interested in why we romanticise and respect certain types of work, and not others,” she says. “It’s often unconscious, from a lifetime of social conditioning. Especially as an artist, I understand this. Most artists don’t earn more than $30,000 a year, we live on the fringes financially, and now we don’t even have an art ministry; so, out of sight, out of mind.”

She needs hundreds more volunteers to fill the positions vacant. Word must reach the pig farmer, the hunter-trapper and the backhoe operator. The weekend farmers’ market at Carriageworks will help her source more of the rural roles, she hopes, with new portraits hung regularly. “It will be continually shifting energy until the end of February.”

Even if her quest remains unfulfilled, as I assume it will, there’s much to admire in its grand designs and its ambition despite the odds. It’s the sort of gesture we need modelled in Australia right now.

Mitchell says she wanted to remind people that we are “fundamentally connected to one another” but also to the environment. “We’ll perish if it perishes, yet we have this bravado, as if that’s not a fact. Aura photography is a beautiful vehicle to talk about the idea that we exist in ways we can’t quite comprehend or see.”

As for Coggins’s claim that seeing your aura helps you “gain deeper personal insight”, he’s not far off. On a day when I was full of dread, my “optimistic orange” reading reminded me that people always used to say I was happy and positive. I’d forgotten that. It reminded me that it’s been a while since I heard it, but that I’m ready to find my way back.