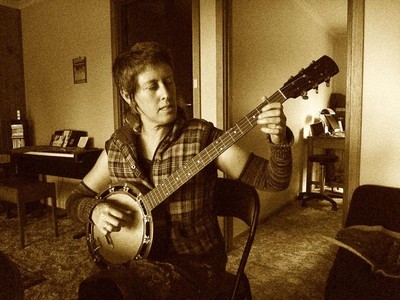 Turn up the tiny guitar

First published in The Brag, December 2008

Attach it to a distortion pedal and it sounds like a wobbly, out-of-tune bass. Pitchshift it up with a delay effect and you’ve got steel drums. The humble ukulele played by electric ukulele lady, Rose Turtle Ertler, sounds nothing like Tiny Tim.

Ertler is currently roaming the north coast of NSW. She’s got her 1940s Gretsch soprano ukulele, her dog and a loose plan to earn enough cash for gas and food. She’s been playing gigs and dropping into Ukulele Clubs around Byron Bay to teach “fancy strumming” techniques, leaving in her wake the debris of several smashed ukulele myths such as misconception # 1: You can’t play serious songs on a silly little uke.

“I guess people think you can only play major chords or something,” says Ertler. “Sometimes I arrive at a rock and roll venue and when the mixer finds out I am a uke player he thinks I’m going to play lots of silly little songs. They’re often surprised!”

Considering a fair chunk of Australia’s non-Hawaiian population would probably be hard-pressed to even name a ukulele (ohhhhh, the tiny little guitar, right?) it’s not surprising Ertler deals with baffled sound dudes. Luckily, she doesn’t need much help.

“I ride my bike to gigs. All I need is my uke, my pedal and a few leads – I just plug into the PA and play what’s probably best described as somewhere between strange pop and folk.”

Ertler stumbled on the ukulele by accident. Bereft of instruments when she arrived home from an overseas trip, the ukulele was the only stringed thing in spitting distance. On impulse, she plugged it into an effects pedal and she hasn’t looked back.

“I didn’t think it would sound so good, but it did. For four years I always played with effects, mainly distortion and pitch shifting.”

While Ertler has moved away from effects with her recent album ‘Ladybirds of Crick Creek’, she says she’ll be plugging it in and weirding it out at Electrofringe in October.

“I am at the nicer end of the noisy stuff that will be there, but I am writing a few new heavier things with effects and distortion. I really like the discordant stuff that most people can’t stand. To me, it’s all music.

“I can’t get enough of a band called The Shaggs at the moment. It’s these three girls from America in the 70s whose Dad pushed them into playing music. It’s drums and two electric guitars and they play really out of time with each other. They are an underground cult hit now – it’s fantastic!”

Type ‘The Shaggs’ into YouTube and you’ll get the idea. As one fan puts it: “They are so good that they transcend all the typical stupid things that artists rely on, like tuning their instruments, singing in key, having a sense of rhythm, and talent. Those things are crutches for the amateurs. Genius!”

Ertler will also be screening a doco called ‘Rock that Uke’ at Electrofringe about the alternative and post-punk ukulele subculture in America. She will be joined by filmmaker William Preston Robinson for the doco which she says is as much about people and their desire to break the mould, as it is about experimental ukulele players. After Electrofringe wraps up on October 6 Ertler will be looking for the next gig. And possibly a band.

“My ideal line-up would be two trombones, a theremin player, some programmed drums and some junky old drums. And maybe a tap dancer.”