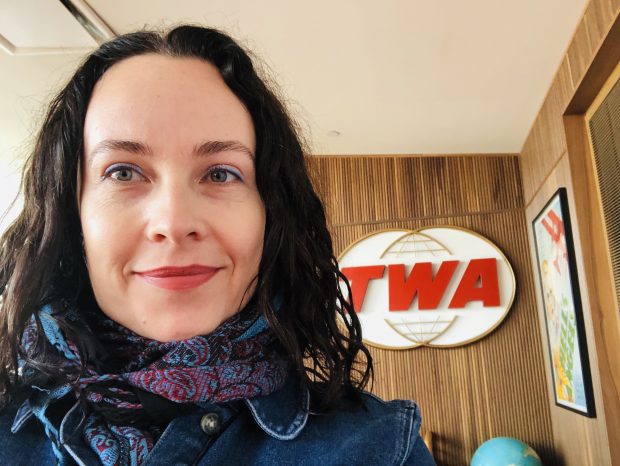 First published in The Australian, November 2021

I am not a happy flyer; it’s merely a means to an end. Neither do I like airports where I soak up the surplus anxiety with the porosity of a deep-sea sponge. Only one place has changed my mind and it was neither a flight nor an airport but a New York hotel. 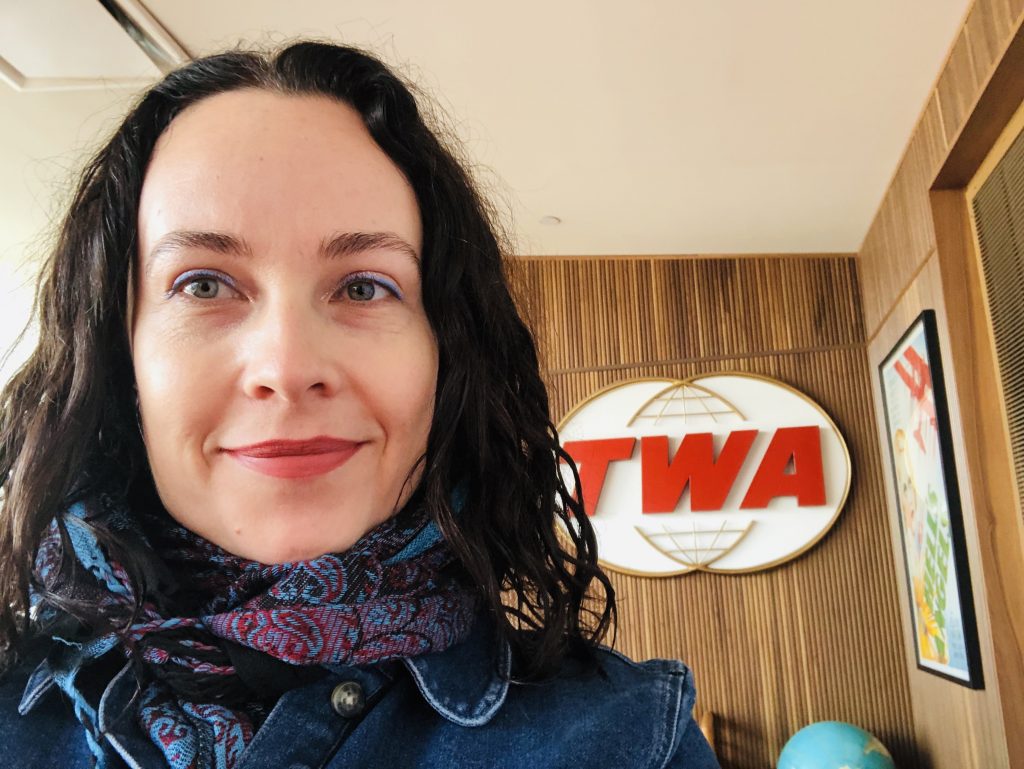 Our JetBlue plane from Florida lands at terminal five, which means TWA Hotel is close. A few steps from the carousel is an elevator with a glossy silver interior. Just like other elevator but with only two buttons. The first says ‘PRESENT DAY JETBLUE’ and the second ‘1960s TWA HOTEL’. We press it and go up – and back in time to the golden age of flying.

From 1962, this was the head terminal of Trans World Airlines (TWA), one of America’s ‘big four’ and owned from 1939 by multi-hyphenate and magnate Howard Hughes. As its Finnish-American architect, Eero Saarinen, was sketching out what he called “an abstraction of the idea of flight”, NASA was racing the Soviet Union to be first to send a man into space. When it opened, Saarinen’s design was a wildly futuristic embodiment of America’s ambitions for both air and space travel.

Saarinen did not predict, however, how large aircraft would grow and by 2001 the terminal was declared defunct. A few arts and fashion projects swung by but in our hotel-obsessed times, it seemed inevitable that only beds could save it. The twist? Winning bidder MCR Hotels flipped the iconic structure’s chief flaw – it is enveloped by North America’s busiest international airport – into its most fun and fabulous feature.

Until TWA Hotel, sleeping at the airport was either a scheduling catastrophe or bloody-minded pragmatism. Yet here, even I marvel at being so close to the runway, over breakfast in bed, that I can see the pilot’s face. It helps that it’s a soundless spectacle. While the 1960s room decor is purist enough to involve rotary dial telephones, MCR did not go retro on soundproofing. Guests want to see the planes, not hear them, and the floor-to-ceiling windows are seven layers thick, second only to the US embassy in London.

A red carpet awaits as the elevator doors part to a tube glowing with soft white light. The aesthetic of directors Stanley Kubrick and David Lynch comes to mind, as does sci-fi film, Gattaca. The Beatles’ I Want To Hold Your Hand is playing but you’re not going to bop along holding anyone’s hand when your bag is becoming bogged in the heritage-listed carpet. Saarinen designed this flight tube (his phrase) to take TWA customers to their gates but suitcases weren’t on wheels then. Given we are proceeding through a wrinkle in time, however, I’m OK to go slow. For if the elevator were the spine sending us up from terminal five, the tube is the artery pouring us into the heart of the 1960s.

Dozens of ex-employees flocked to TWA’s opening party in 2019 where a flight attendant from the 1960s told Architect Magazine the terminal “still looks futuristic to me”. It’s true. Sixty years after the concrete was poured into the building’s bird-like outstretched wings it feels as if you’re in the future and the past at once. White and bright, with overpasses and stairways that spill into each other, the terminal appears “equal parts liquid and solid”, wrote Architect Magazine. Its curves are akin to the Sydney Opera House sails, the work of another visionary Scandinavian, Danish architect Jørn Utzon, with construction on both buildings starting in 1959.

At the tube’s end is a corridor of luminescent check-in desks. These days, to the hotel; previously, to flights. Only passengers weren’t wearing elasticated pants with eye masks and earplugs tumbling from the pockets back then. Our slobbishness is contrast with a display of original uniforms dating back to the 1940s. TWA sought each era’s top designers because until 1978, the government regulated ticket prices, which meant airlines couldn’t differentiate by cost. Instead, they lured in passengers with stunning uniforms, great cocktails and good food. It was enough for Pope John Paul II, who exclusively flew TWA, and was allocated a private room designed to direct his gaze heavenwards. Nothing is sacred now though; guests can pop in anytime.

Back to those uniforms. The Howard Greer-designed skirtsuit from 1944 has a fold-down tab on its collar to cover the TWA logo – “so there was no brand recognition if she wanted a smoke or a drink,” a hotel employee says – while the Valentino skirt could unbutton to reveal hot pants. American designer Stan Herman designed TWA’s uniforms in the 1970s with one abandoned trial involving faux fur coats. “The flight attendants could hardly get through the aisles,” Herman has said. Now 93-years-old, Herman designed the hotel employee’s uniforms today, testament to how meticulously TWA has embroidered its past into its present.

The original passenger departure area is now called the Sunken Lounge and is flanked by bars serving cocktails called Come Fly With Me and Single Engine Spirit. Saarinen’s famous tulip tables sprout from the red carpet while his tulip chairs bloom in the rooms. The lettering of the vintage split-flap Solari display board clatters and clacks, replacing a flight to Prague with one to Shanghai; Tokyo with Lisbon. The music is on a strict diet of songs from 1962 to 1969 though it eschews that era’s hard rock, heavy blues and psychedelic byroads for the smooth comfort food of Frank Sinatra, Shirley Bassey and The Ronnettes.

We do dinner at the Paris Café, a restaurant in a palette of muted greys and dusty pinks by French-American chef, Jean-George. Afterwards, we nip across a simulated tarmac for a warm spiced nightcap on the Lockheed Constellation prop plane commissioned by Hughes in 1939, the “Connie”. The plane is stylish, plush and cosy – as travel once was too – with a history that makes your head spin. In 1946, the Connie broke the transcontinental speed record, in the 1950s she served as Air Force One. From mouldering in the weeds of Arizona, to airdropping marijuana in Colombia, and rusting away again in Honduras – eventually, the plane was hauled 300 miles from Maine, through Times Square, back to home turf at JFK. We wrap up surrounded by night flights in the rooftop infinity pool, the water steaming in the freezing air.

A historical concept hotel was a risk. Sleeping, showering and dining in a concluded idea of the past could feel oppressive. TWA Hotel’s coup is how tastefully it presents the most optimistic highlights of the 1960s, and of flying’s golden age. Neither museum-like nor kitsch, it is equally animated by the present as the past. Motion is everywhere. Your peripheral vision flickers with planes on the go and the Airtrain gliding to and fro on its slick sci-fi rails. A woman in thigh-high boots rolls her designer bag, talking as she’s stalking, little of 1960s about her but a whole lot of New York city. 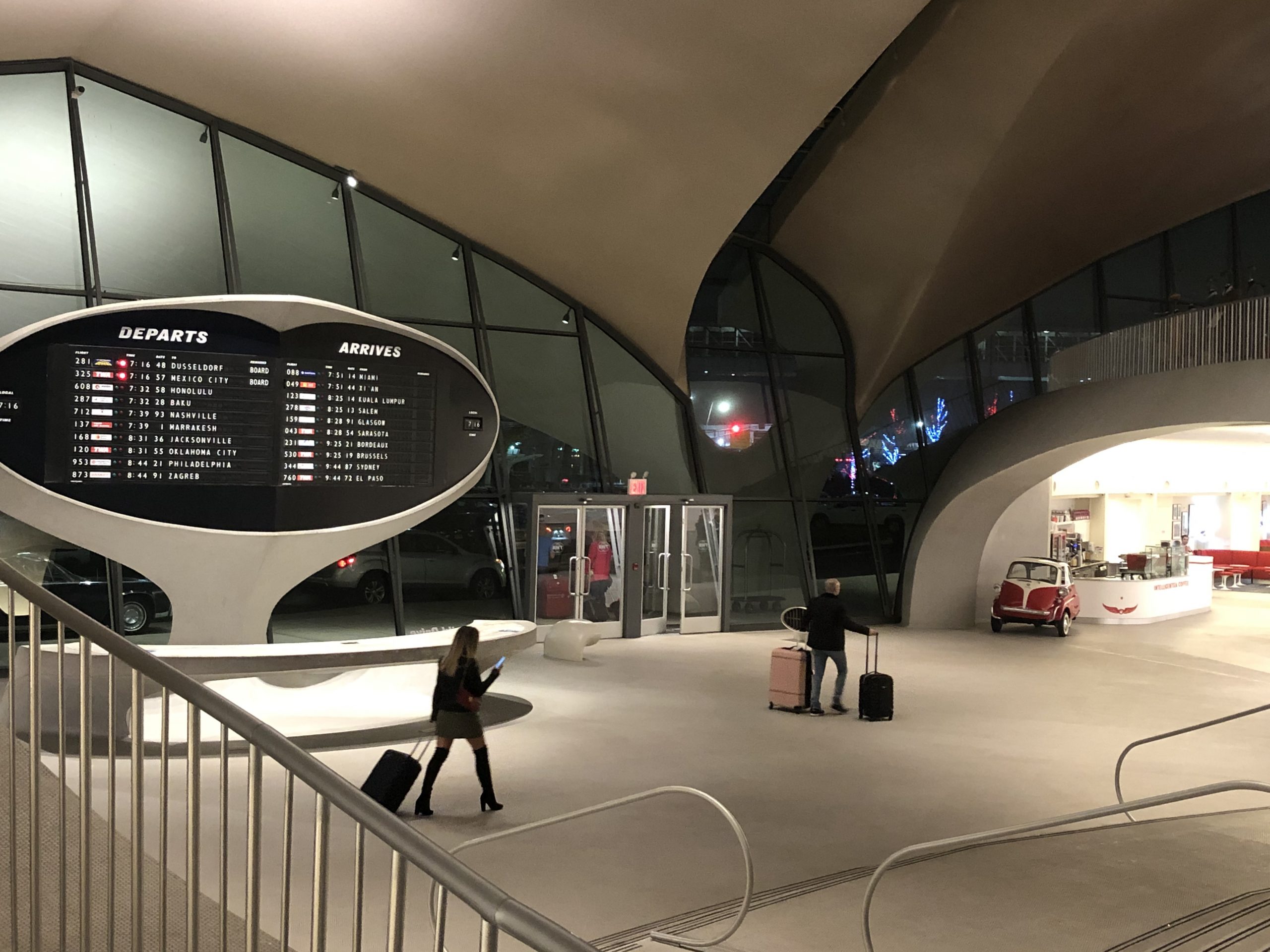 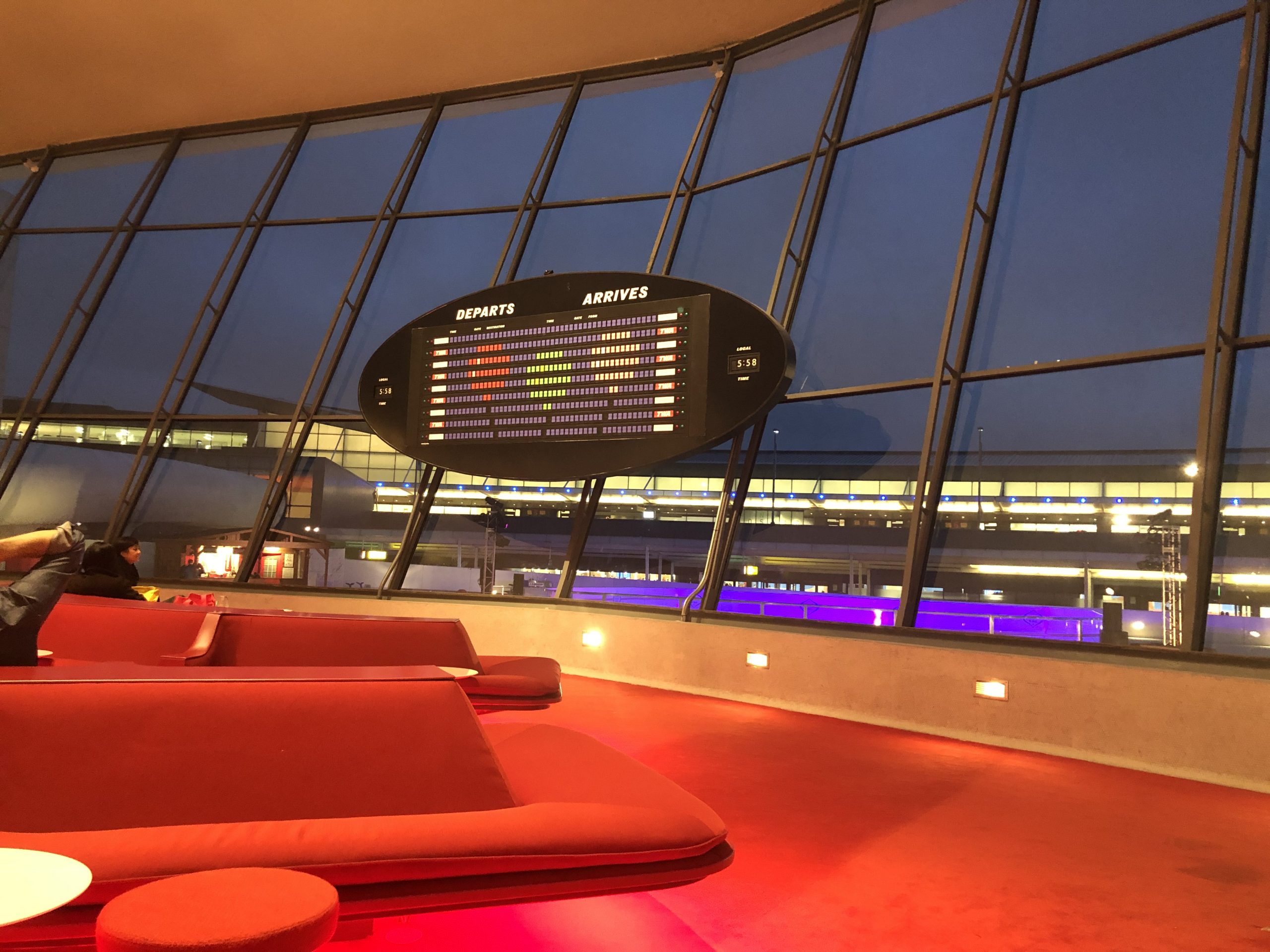 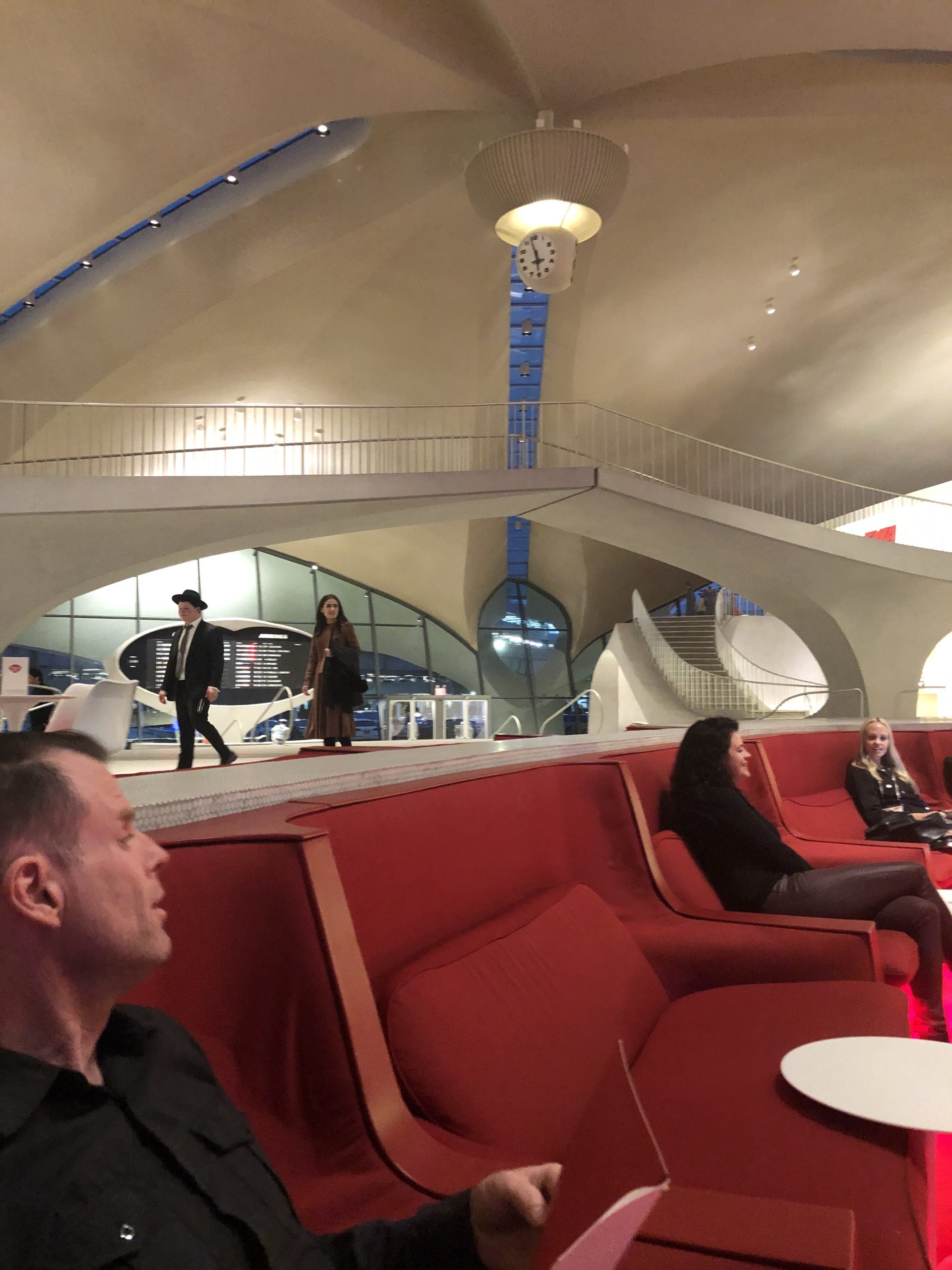 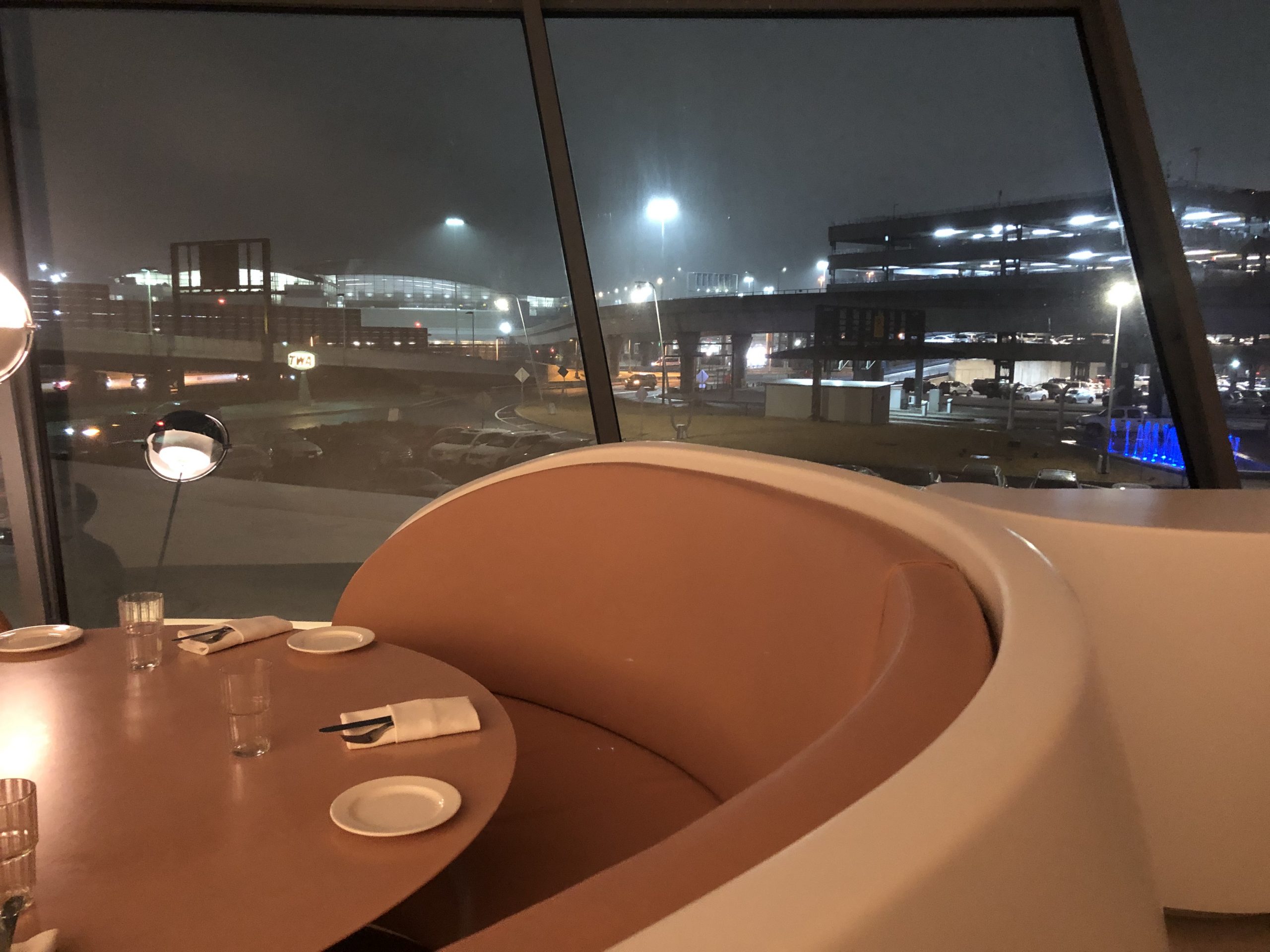 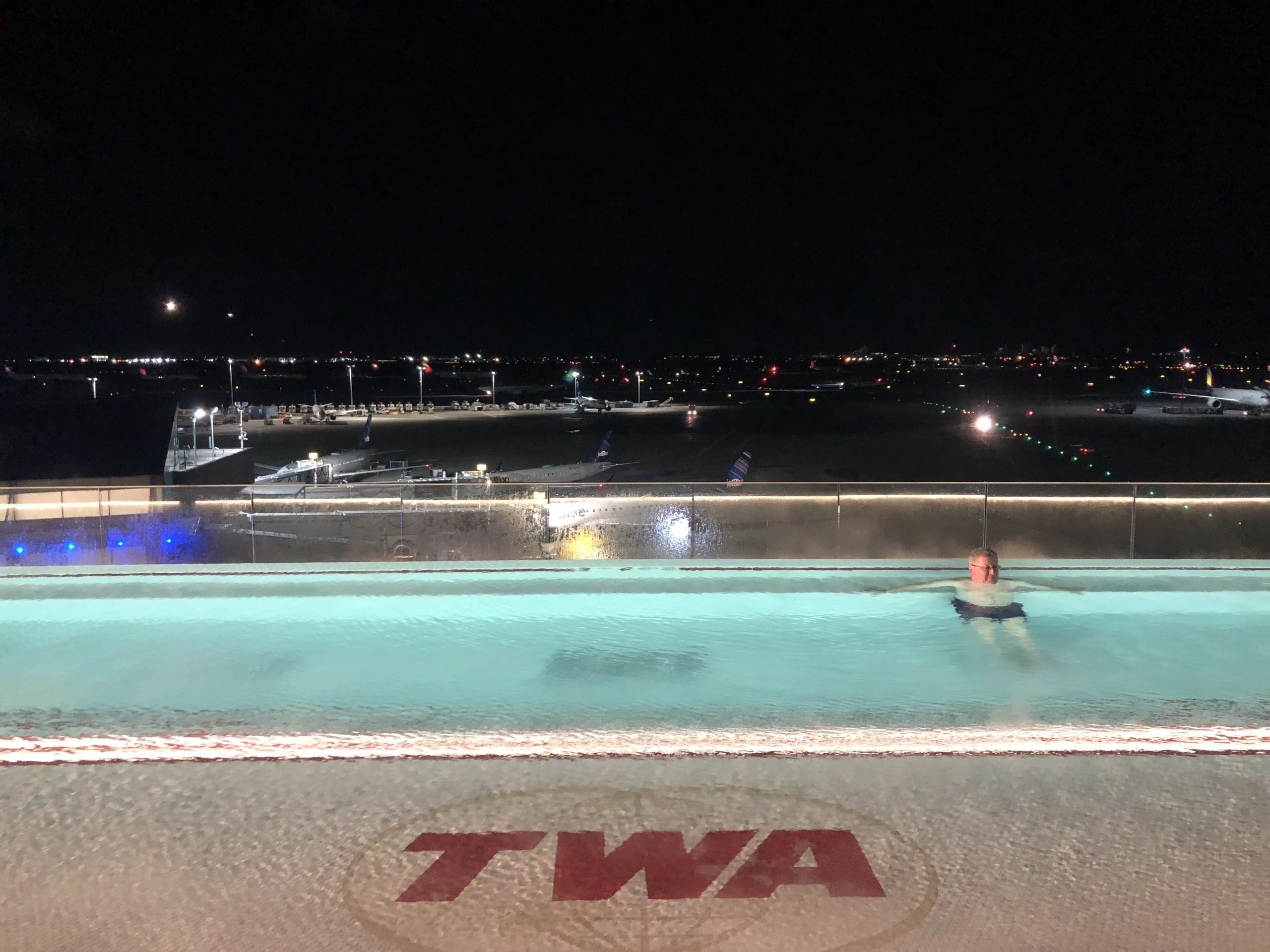 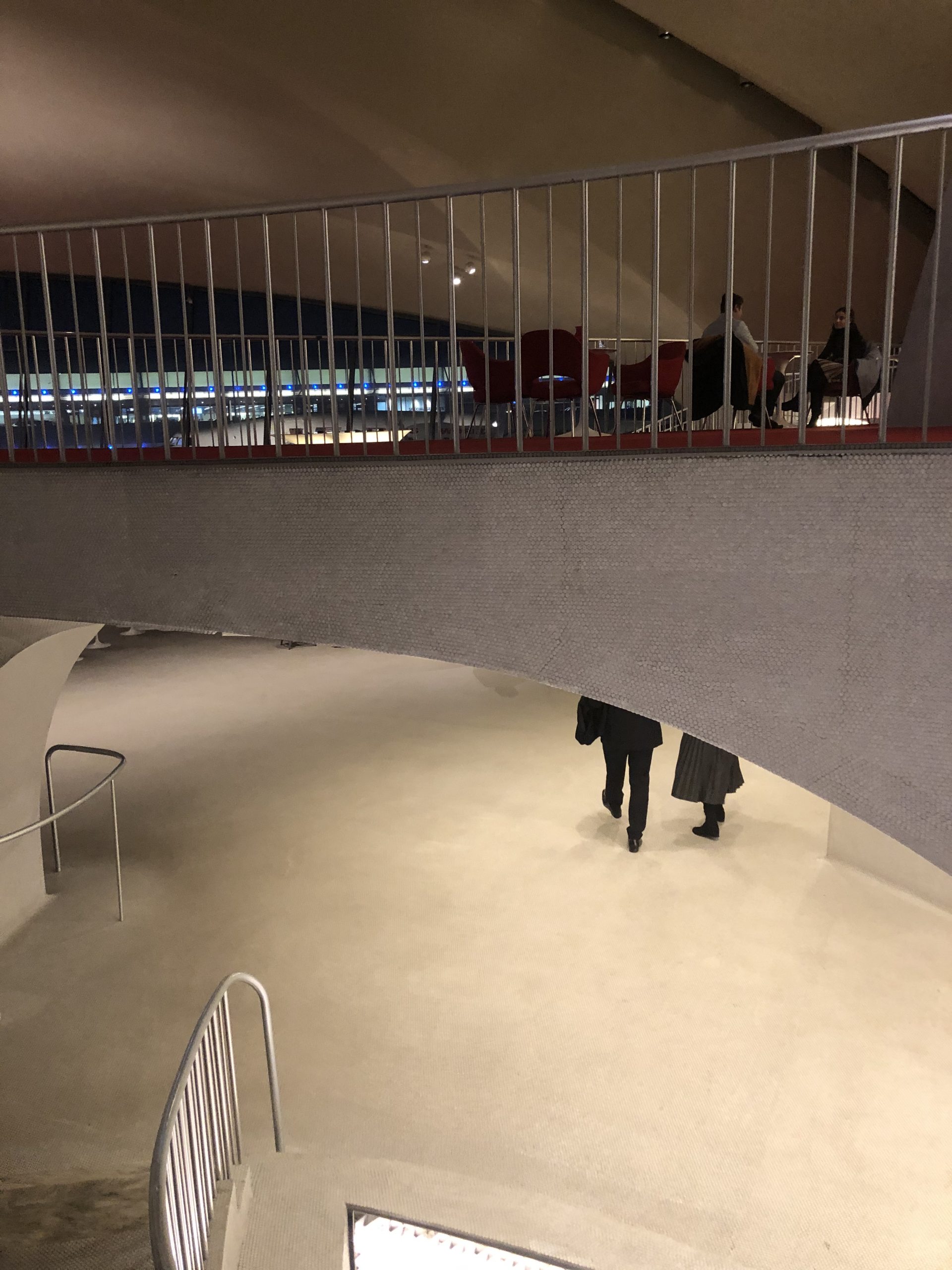 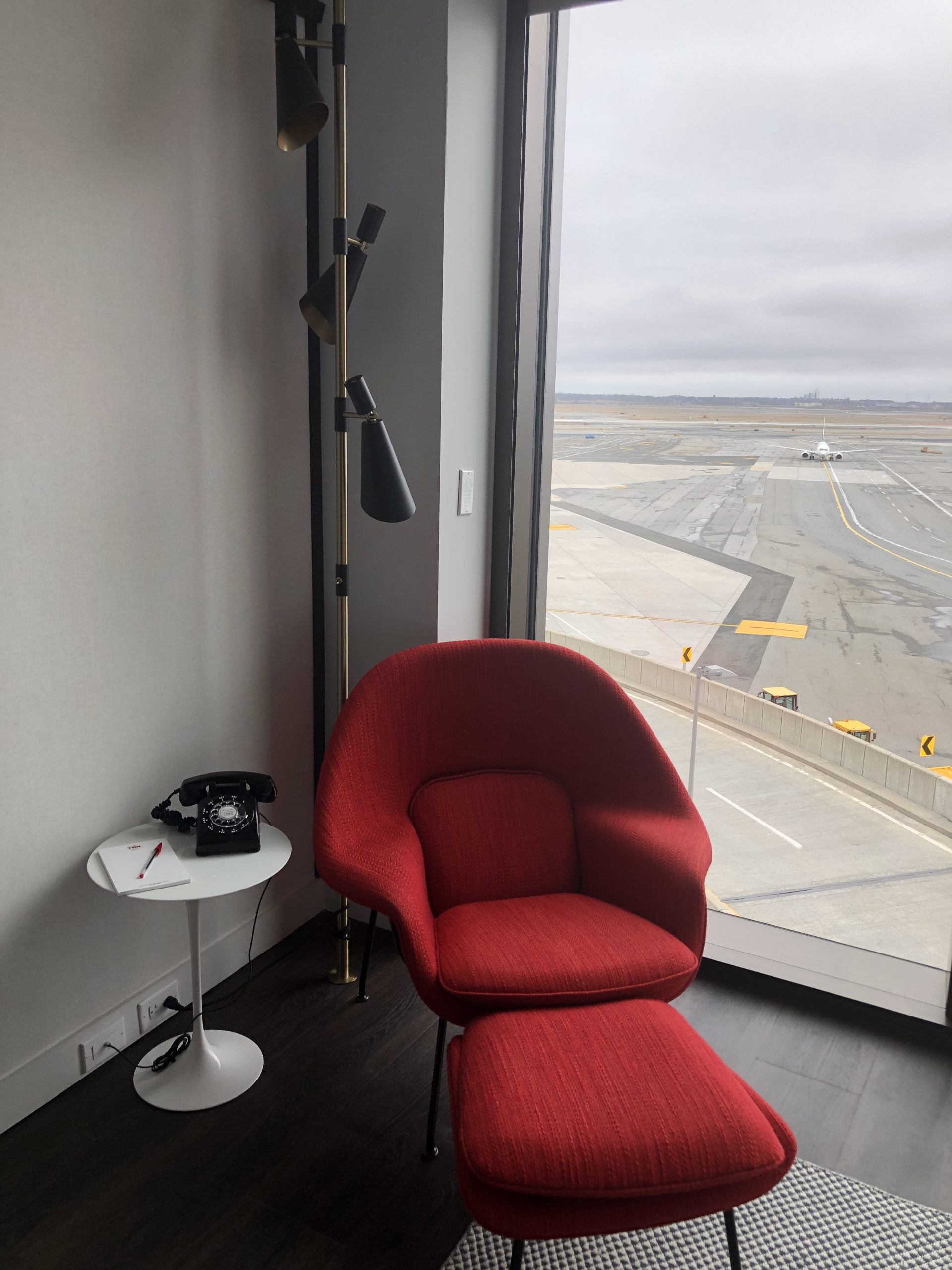 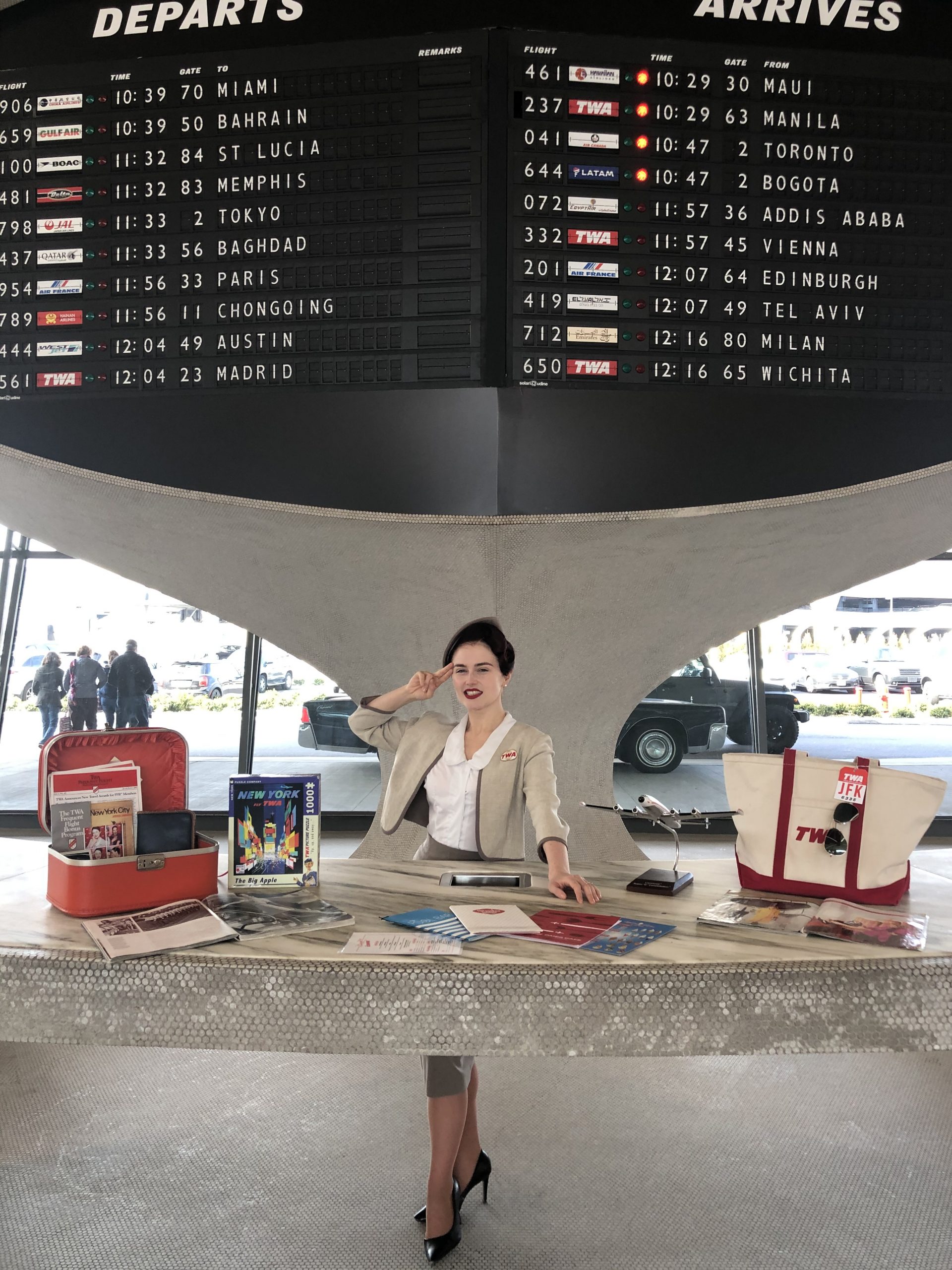 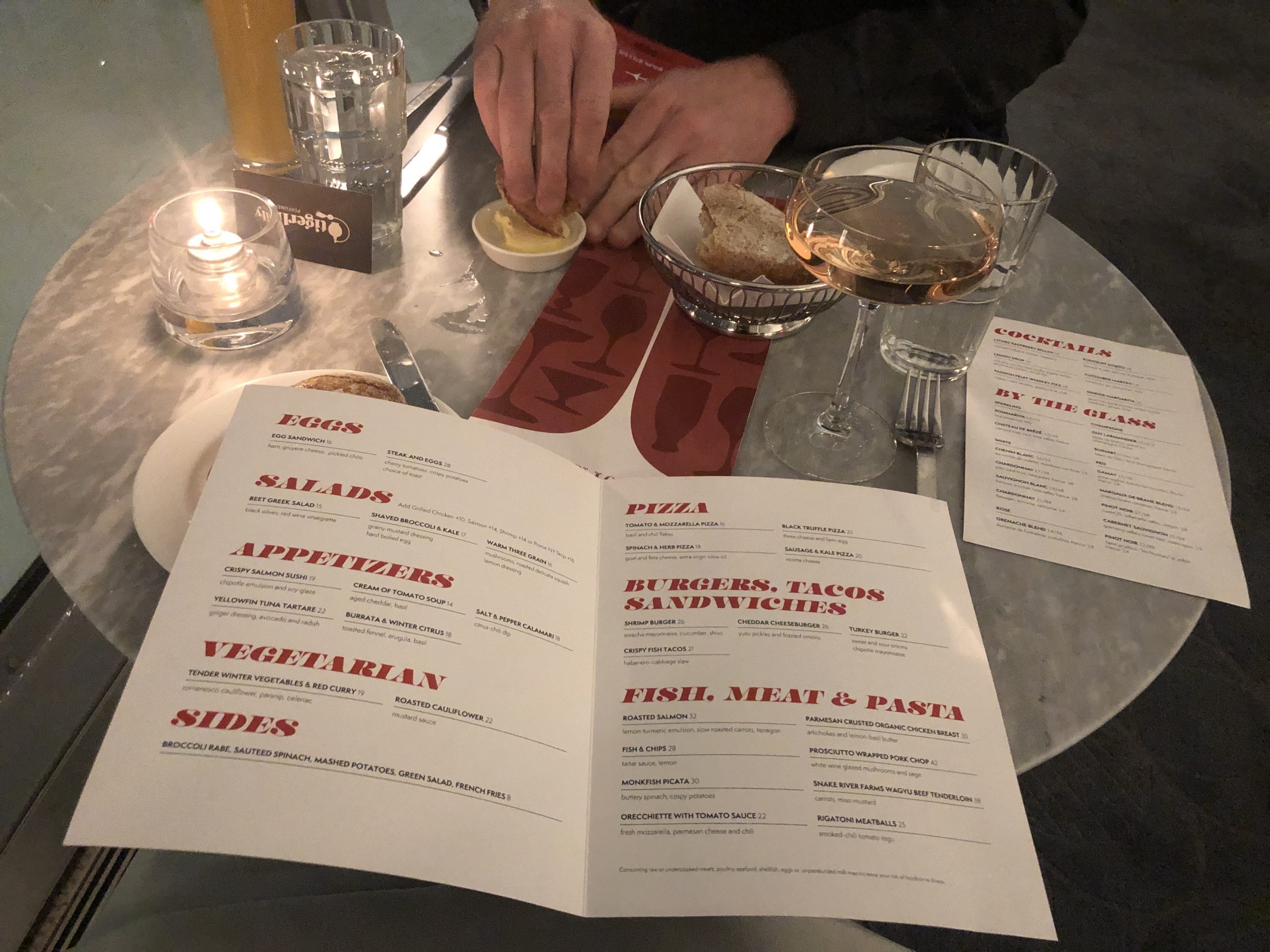 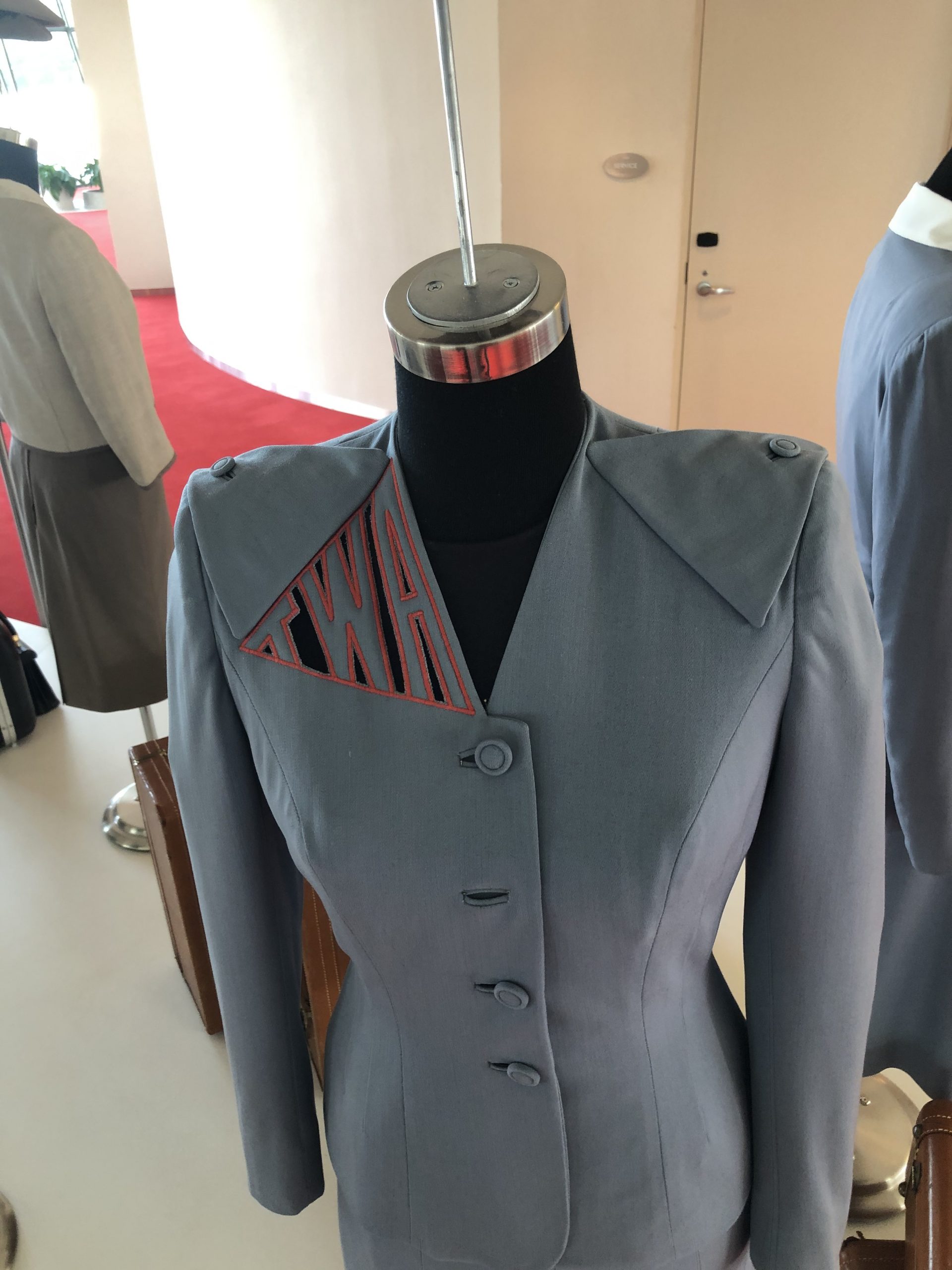 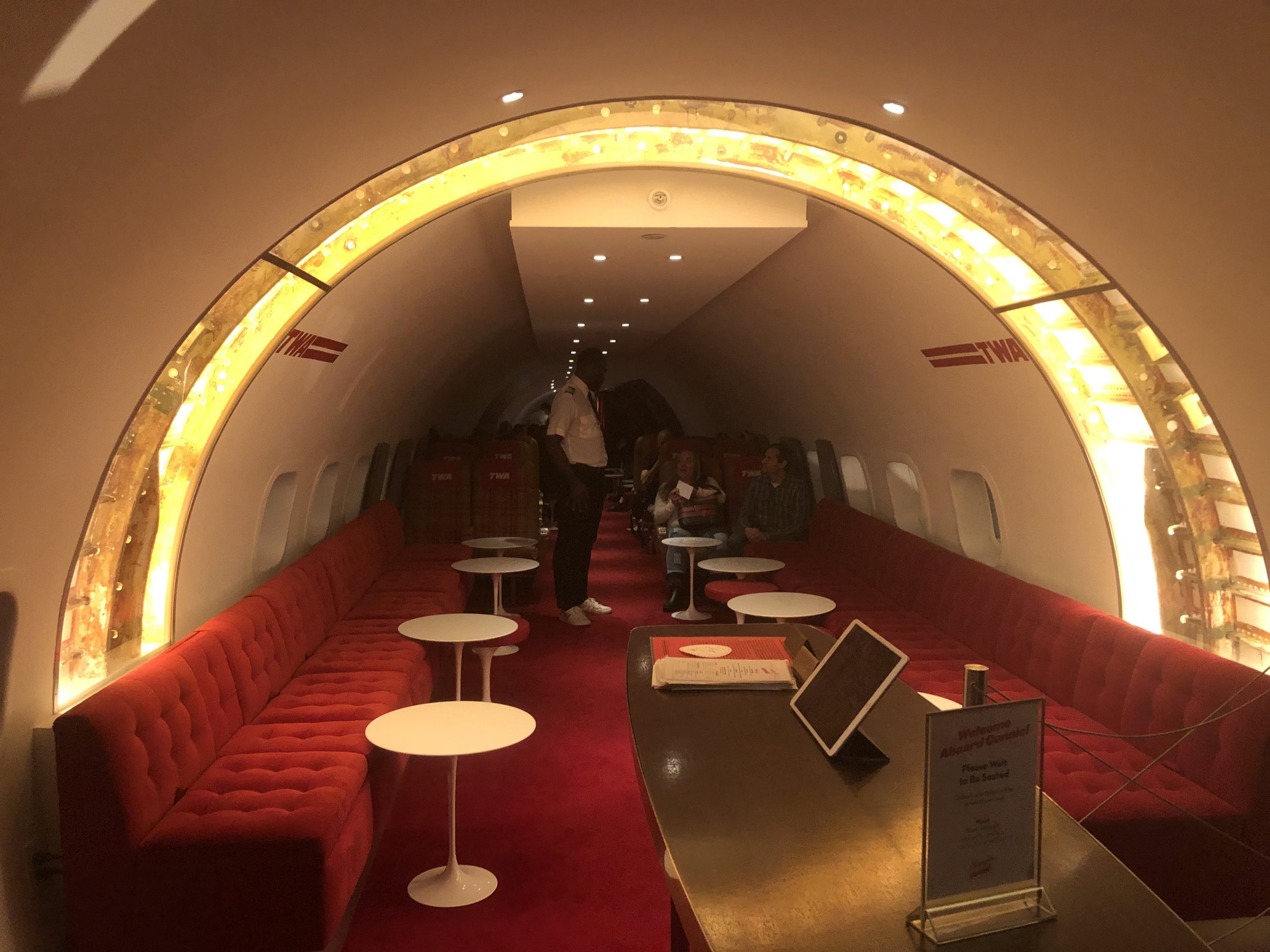 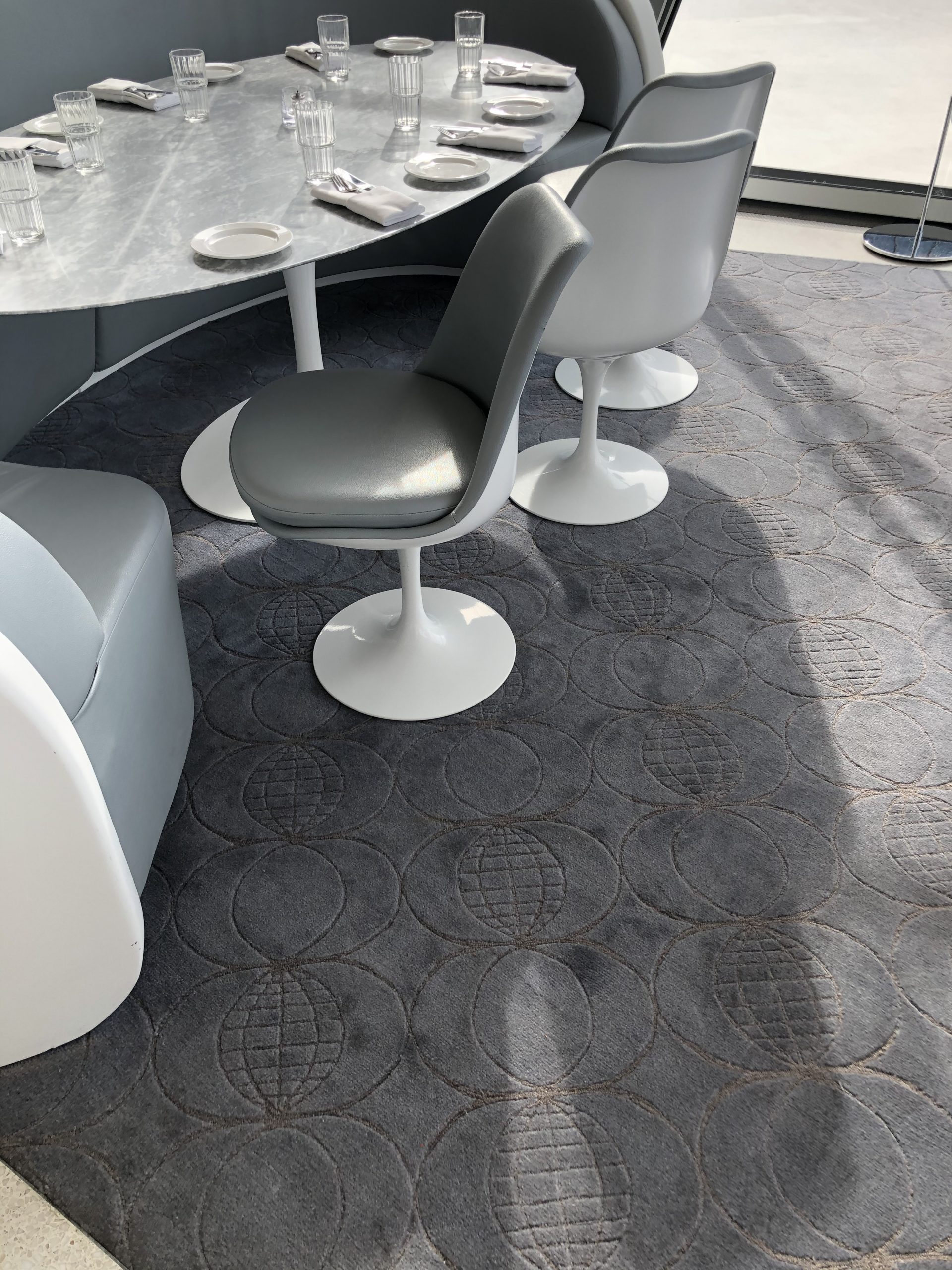 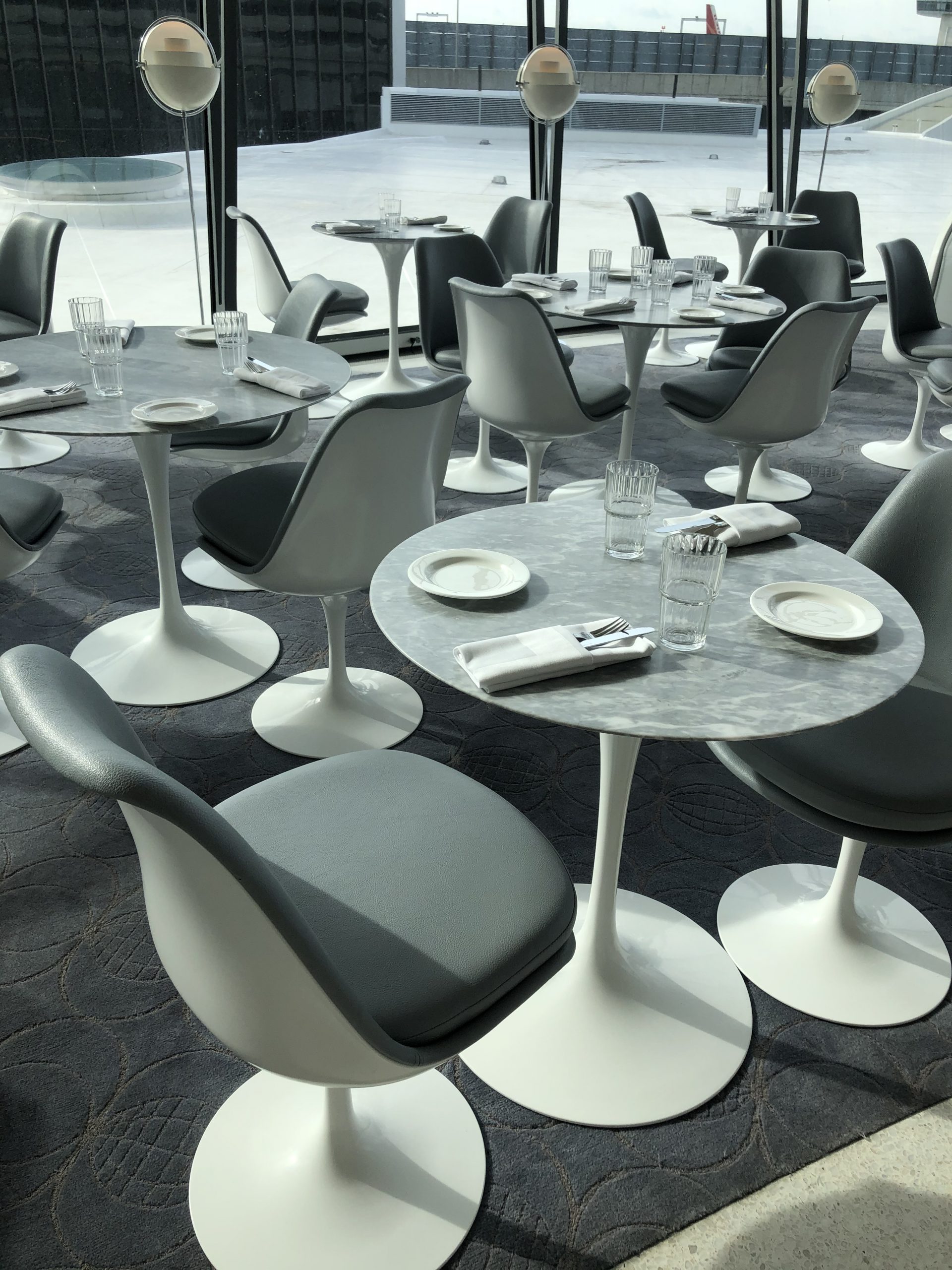 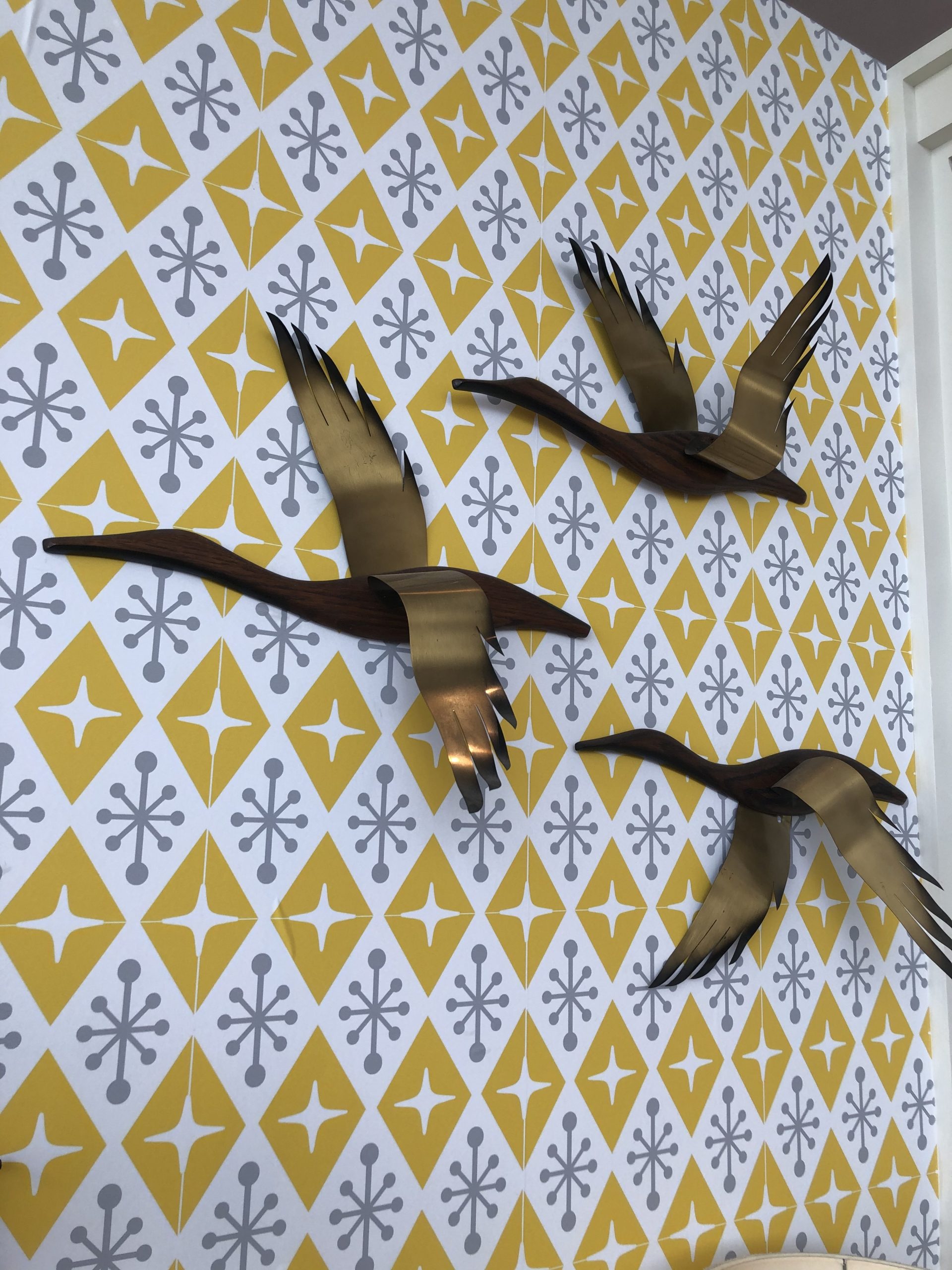 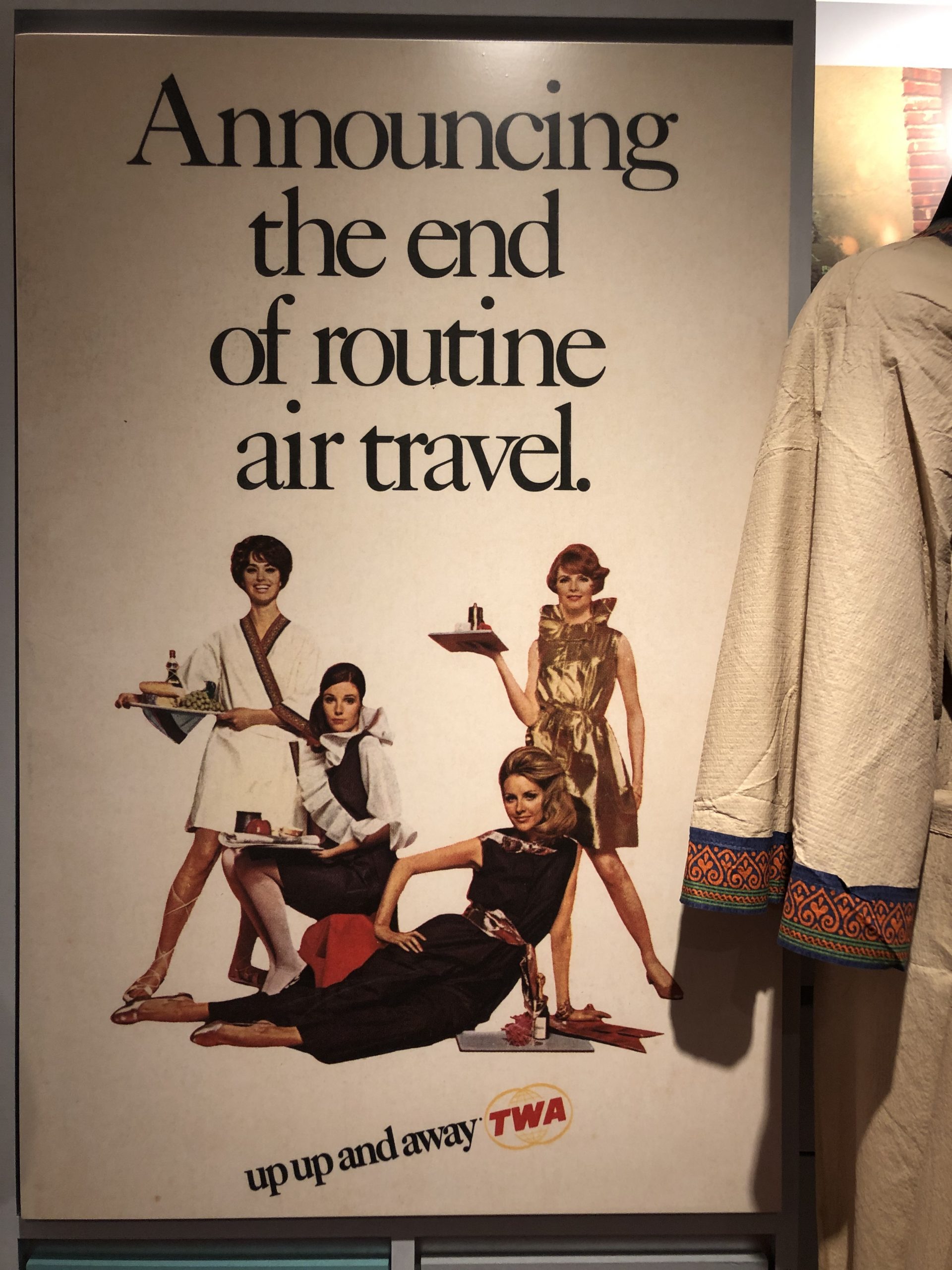 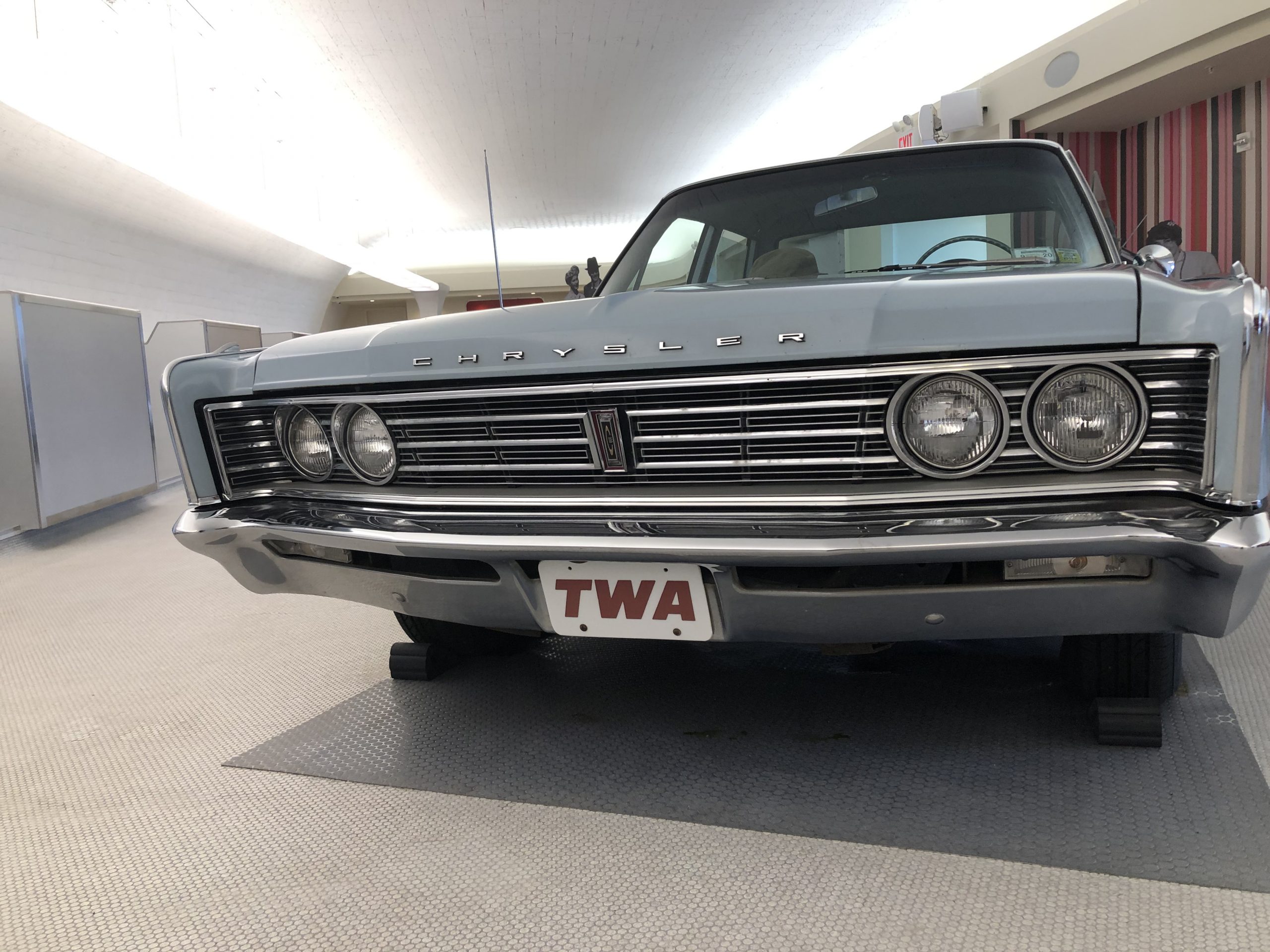 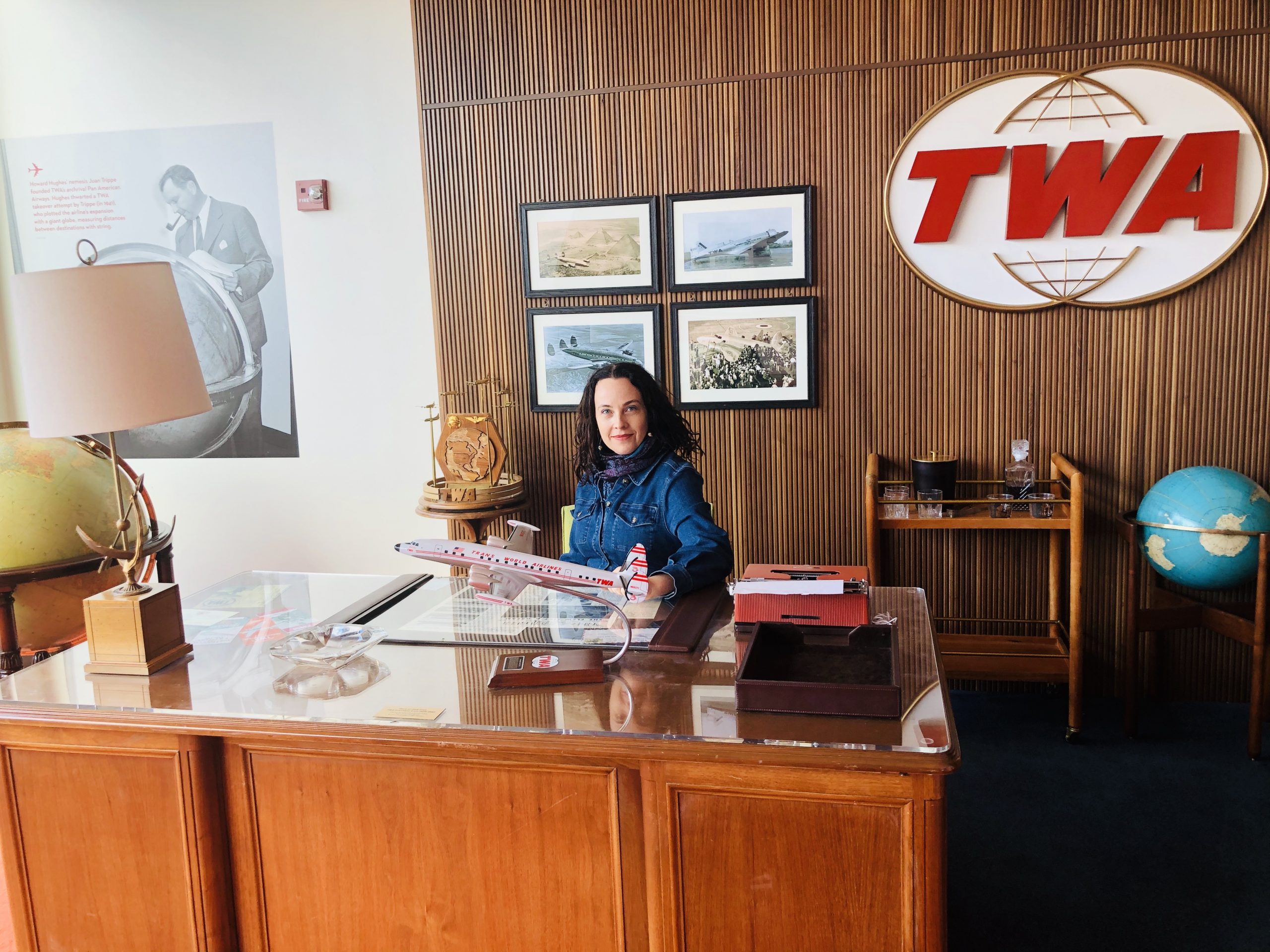