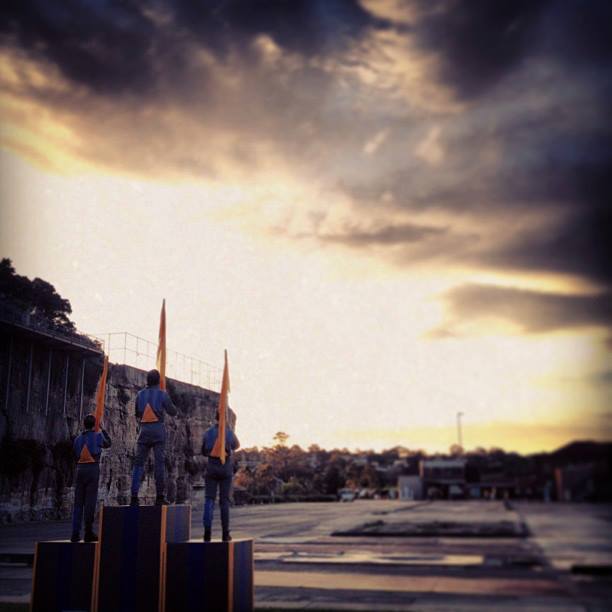 Underbelly Arts Festival is challenged by its biggest blessing: how will its art outcharm the formidable charm of its venue? Sparkling sun or icy wind, day or night, Cockatoo Island is a fascinating place to ponder and wander – even sans art.

While the first work visible on disembarking the ferry for Saturday’s After Dark Party proclaims ‘Nothing To See Here’, the opposite is true. Past the sandstone cliff – awash in dramatic red light – the gargantuan Turbine Hall awaits, its innards and outbuildings inhabited by sound, performance, installation, audio-visual and interactive works.

But the hall’s vastness, alone, is a spectacle, its dimensions dwarfing the humans that roam in and out of rooms and regions that pulsate with light, sound or both. A festival map is thrust at me detailing where each of the 30 projects created by 100 artists are located but, still, it’s hard to know where to start.

Seeing some friends who’ve been here for hours doesn’t help. “Go get your brain waves read in 3D!” they enthuse. “Or, just down there you can destroy a city listening to angry music on headphones.” Much of the art here is highly conceptual but the atmosphere tonight is highly tangible: it’s one of fun, interactivity and celebration.

Insomniac seagulls spray through the black night air as I wander the Docks Precinct where once-purposeful machinery – paragons of their era – now rust and hulk.  There I encounter a crane that talks back. When you yell into a box at its base, the sound is returned from deep within the machinery’s guts in bestial booms that carry muffled echoes of your own intonations.

Called Mammoth: The Anti-Artifact Project, this simple yet endearing work claims to “breathe life into the island’s museum of broken-down machines”. Nearby, in the water, an upside-down ship echoes my voice as deeply and mournfully as whalesong, becoming, like the crane, impossible not to anthropomorphise.

Returning to Underbelly in Sunday’s glorious sun, it becomes clear the best works are those like Mammoth that exist in synchronicity with the island – or are palpably inspired by it – rather than competing with it.  Such site-specific artworks are nourished by the The Lab, the two-week period in which artists develop their works on site.

It was during The Lab that Melbourne artists Amy Spiers and Catherine Ryan developed Nothing To See Here – a viewing platform that offers a view of Sydney Harbour with the Harbour Bridge erased from it; a work so rich in historical and political context the artists offer a 26-page booklet to explain it.

Sunday is the day targeted at parents, kids and teens. The hands-on way in which younger audiences engage with the world s over today into their engagement with art. A role-play called I Met You In A City That Wasn’t On The Map is a favourite with kids who get to destroy, rebuild or evacuate a city made from cardboard boxes. Conceptually solid yet rowdily fun: an apt summary, really, of Underbelly itself.