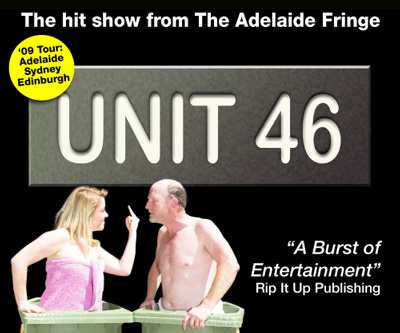 First published in The Brag, July 2009

Do people really talk to themselves in full sentences? Not really, no. But the two actors in Unit 46 do, for the entire duration of the play.

Mick Barnes’ comedy is constructed from two cleverly entwined soliloquies by its two characters. Tim (Leof Kingsford-Smith) is an uptight ex-bureaucrat verging on 50. He lives in the unit above Diane (Lucy Miller), who’s teetering unhappily on 40 and thrashing out the feistier stage of grief about a recent divorce.

They hate each other. Diane is enraged by Tim’s neglect to follow strata rules and Tim is infuriated by Diane’s brazen determination to disturb the unsteady calm of his little world, his Unit 46. Since they’re talking to themselves – surely an inherently fraught approach when a degree of realism is essential and your characters border on self-induced hysteria for most of the play? – their characters unfurl immediately. Their similarities flop out all over the place soon after.

They’re both sacked, single, angry, possibly alcoholic and alone. Both are also somewhat delusional which provides much of the comedy throughout.

The stage design and blocking is executed brilliantly. Tim and Diane literally ‘own’ the same small space which doubles as both of their units. They recline on the bed simultaneously, yet they never meet, and it’s somehow believable. Their blinkered closeness, necessitated by the play’s claustrophobic set, reflects Unit 46’s main theme: the alienation and aloneness of modern, high-density living.