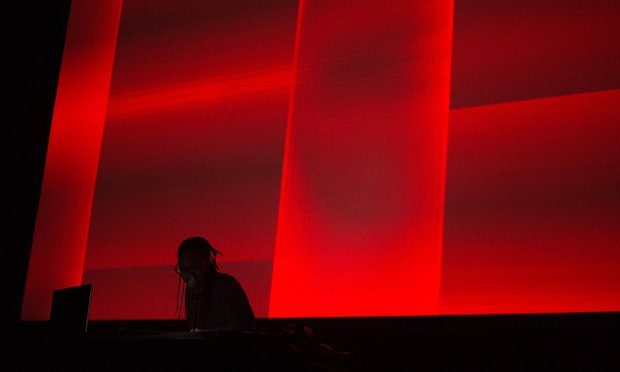 First published in The Guardian, February 2016

Some say the music of Unsound is “difficult”. But difficult to one is eyes-closed, body-slumped bliss to another. The phrase “boundary-pushing” is problematic too because boundaries are only pushed if you’ve already got them drawn.

The Unsound faithful – me included – rarely do. Our taste isn’t shoehorned into closed ideas of what we like or don’t like but defined by an open-mindedness that requests one thing: be interesting. Play me something I haven’t heard or take me somewhere I’ve haven’t been. Embody the essence of something or its genesis. Convince me by stealth or by force, by brutality or brains. Unsound made its name in Krakow in around 2003 and has gone on to produce events in other European and American cities. For years, from Sydney, I watched unmissable line-ups bloom and wilt. Poland was a long way away. Then, a “one-off” Unsound event was held in Adelaide in 2013. It sold out and recurred in 2014, co-curated by founder Mat Schulz and the artistic director of the Adelaide festival, David Sefton. Sefton’s personal enthusiasm for – and history with – experimental music saw Unsound become entrenched in the city festival’s program.

This festival of experimental electronic music recalibrates one’s concept of how powerful live music could and shouldbe. My first taste of it in 2014 sharpened me as a music critic by setting my goalposts higher.

Back this year, I meet a group of friendly Adelaideans who have not missed an Unsound show in four years. Many (though not enough; there are plenty of tickets on the door) have flown in from around Australia. There are more dancers here this year: ravers in orange NASA overalls and girls in gym gear and sneakers.

Everyone I speak to is gripped by different acts. The polished post post-rock of SUMS (a collaboration between Mogwai’s Barry Burns and DJ Kangding Ray) leaves me cold while a phalanx of bearded guys up the front are hotly transfixed. Another night, I might be won over too. But at Unsound I rejoice in not second-guessing my ambivalence. The acts here tend to be forceful enough for a “yes” or a “no” to well up inarguably within me.

One artist is ecstatically received by everyone I ask: Jlin. Unsound’s line-ups often feature pioneers of niche electronic genres alongside exciting newcomers. That polarity is brilliantly expressed on Friday night with irrepressible Chicago footwork pioneer RP Boo (whose closing set turns “the Thebby” into a resemblance of the crazed dregs of a warehouse party) and, earlier in the night, Indiana’s Jlin, a women whose 2015 debut record, Dark Energy, pushed the frenetic yet formulaic danceability of footwork into intense, idiosyncratic terrain.

There is no sense Jlin’s set is her eighth ever. Live, her tracks are even sharper and drier than on record; whip-crack breaks fissuring into densely percussive attacks. There is an engrossing resistance to her sound that sees even the fleetest of dancing feet stop and start, unsure. Jlin’s impact is not the kind that builds via a succession of gratifying moments. So new to the game, her acheivement is in crafting something that is big picture, all or nothing; a sound best served swallowed whole, jagged edges and all.

The evening had begun with Tralala Blip, a group of differently abled musicians from Lismore. The surprising arrangements of their 2014 album, Aussie Dream, translate well live with tracks that expand airily followed by others that implode, the reverb on one singer’s voice making it sound like Hindi. Tralala Blip remind us beautifully of two things we love about experimental music: the alchemy of collaboration and the raw expressiveness found in unorthodox pairings (a microphone is played over a theremin).

Most Unsound DJs collaborate with artists to deliver stunning visuals. Bar the shimmering sepia and gold of Lillevan’s superimpositions during a brooding yet deafening set from Austrian sound artist Fennesz, most visuals are black and white. They are the only light in a blackened auditorium – a good idea in a theatre that’s a little on the stately side for the depravity of some of the club sounds it presents.

The visuals also mean that few artists choose to obscure them by firing up smoke machines – a reliable way to shrink a room. Until Babyfather, that is.

Babyfather’s most renowned member is Dean Blunt, described by Schulz as “a singular, shadowy figure in the electronic music world” and best known for his work as Hype Williams. Blunt is indeed shadowy when viewed through a room curdled by smoke. Adding to the disorientation is Blunt’s insistence he play with the house lights turned up. A bodyguard (sourced in Adelaide by Unsound due to Babyfather’s last-minute addition to the bill) stands sentinel with hands clasped, reminicient of Public Enemy’s S1Ws, though barely visible through the pall.

Babyfather’s set is unforgettable. When not assaulting us with noise – during which he repeats “don’t panic” – Blunt prowls the stage in professorial clothes, no effects on his flat voice, performing a sort of tense trip hop from a place of cold, coiled anger, his only banter a shout-out to “any Aborigines in the audience”.

There are many more highlights during Unsound’s 12 hours of music, condensed this year into two nights. From the profoundly conspiratorial vibe of Kode9’s “third ear spa”, to the soporific post-classical vignettes of Jóhann Jóhannsson, to the industrial pummelling of Vessel (a set complicated by the torture porn whiff of Pedro Maia’s visuals) and the gratification of Kangding Ray’s house-influenced techno which whips the theatre into a froth of dancing. Then, there is Paula Temple closing the festival with the most unrepentantly dark techno I’ve ever moved that much to, making Kangding Ray’s set seem as refreshing as a glass of iced cucumber water.

This is Sefton’s last year as the Adelaide festival’s artistic director. Let’s hope his replacement is willing prey to Unsound’s confronting charms too.