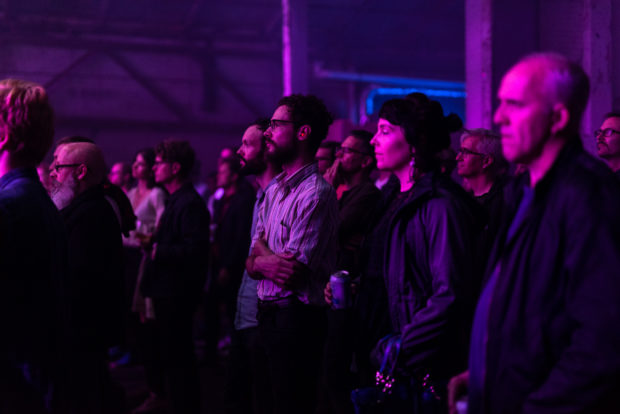 Six editions in and Adelaide still can’t believe its luck that Unsound Festival landed here. When it began in 2014 as the strange and spiky rock embedded in the state-funded monolith of Adelaide Festival, it made some sense. Then a troubling hiatus when many thought it may resurface in Melbourne or Sydney. But in 2017 it was back – in Adelaide. 2018’s festival is a sell-out squish but its essence is intact: uniting an incongruent diaspora of electronic music’s outliers and iconoclasts under the Unsound umbrella just for a night. While experimental music can summon a special kind of stiffness in its spectators, Adelaide has a gamer, grittier, littler-city feel.

The charisma of Eartheater (Alexandra Drewchin) is vast. Her sounds, meanwhile, are fractured and dripping, rarely congealing into song but to be supped on as worlds unto themselves. Some grey crusts of scum, dislodged by bass that thrums like a chopper landing, seesaw down. As Drewchin’s body arches backwards, hands hanging limp, there’s a real sense that something wicked this way comes. She drains her wine in three long gulps, staring out blankly, and is gone.

Nicholas Jaar’s only-in-Australia premiere may’ve gelled had we been asked to close our eyes and give it our inward all. As it is, the composition isn’t compelling enough to distract from the visuals – and those don’t justify our attention. It’s a poorly filmed hodgepodge – pebbles, a garden chair, strobe on some thorns – screaming for meaning. When a heckler yells “play the classics, yeah?” I get her frustration. That is until Jaar peels off into a blistering outro of classic drum and bass.

“We aren’t the types who’ll appear in the dark like vampires to play music then disappear like we were never there,” says Matmos’s M. C. Schmidt, before whipping up an electronic hoe-down by twanging a record on the edge of a cinderblock. Later, he holds an amplified sticky tape reel as an audience member walks backwards, spooling it out. The tape’s tautness retches and stretches and oh, how we laugh! Matmos’s inversion of musique concrète – never masking the sound’s source – deflates any onstage and offstage pomposities. The duo should be a Unsound line-up fixture.

Once at Sydney warehouses you’d often see a bloodied Lucas Abela using his face to play a sheet of glass. Then his routine lapsed into legend. It’s fun to see it rebooted though by the time Abela smashes the sheet on his skull and lurches off, you’re ready to farewell the noise-screech.

Robin Stewart and Harry Wright of Giant Swan are as drawn into the maelstrom of their fat and filthy techno as the crowds they play it to. An hour in, dancers start exiting, exhausted by a techno set played at noise gig volume and intensity. They sidle back in when Stewart’s yelping vocals, decaying into heavy delay, keep on coming.

The performance by Polish cellist Resina is as much ritual, and incantation, as it is post-classical poise and in the blue light and fog she evokes the Lady of the Lake. Yves Tumor (Sean Bowie) prowls like a caged lion, chiding the lighting guy’s choices and dunking the accessibility of his recent songs into a sea of static. He seems rather alone up there with his table of gear placed side-of-stage like a house party DJ.

Bliss Signal lay concrete slabs of dirge over barely discernible rhythms, doubling down on the thickness and bass of their recordings. It’s terrifyingly loud. One ticket-holder just screams through the set; noise upon noise. Others hold their elbows like they’re battling through a blizzard: eyes blinded, ears blunted.

Behind Ben Frost billow silver curtains, shimmering like sunlight viewed from a fathom deep. His set is meticulous and grandiose; layered to take you away like the tides. It’s a tad too carefully constructed for me, so I take an ear-break outside. There, the doors of the Queens Theatre rumble and thunder in flabby metal flatulence. They’re made from the corrugated galvanised iron that is ubiquitous in Australia; a surprise down-under exclusive in an Adelaidean alleyway.