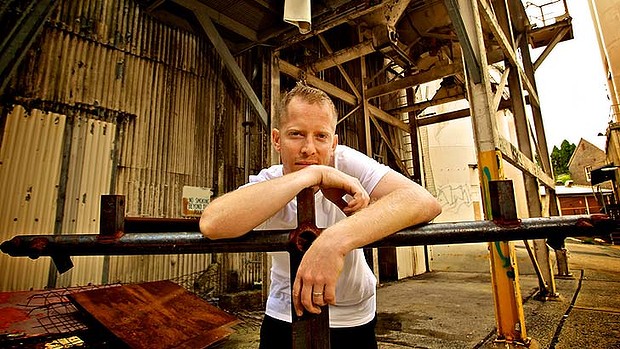 Whether it’s in the sweet little stage-side viewing area, or amid the backwash of punters and performers between the restaurant and the band room, the ‘Dale is still Sydney’s most relaxed venue. The half-finished renovations speak volumes about its struggles to stay afloat but, tonight, that all seems like a bad dream.

Urthboy, however, isn’t one to miss a chance to pay respect. It’s mid-way through his show – the hometown launch of 2012 record Smokey’s Haunt – and every song has been another reason to send our hands sky high. Urthboy hasn’t stopped bounding across the stage like a hyperactive crab and the sold-out crowd is in the grip of live hip-hop’s celebratory communion. But even the young guys in ball caps with sprit-level-straight peaks need a breather.

“They were always really supportive of hip-hop,” Urthboy says of hotel owners Matt and Dan Rule. “Dudes always had a smile and a welcome. This one goes out to them.” Before lunging into ‘Nuthin That I’d Rather Do’, Urthboy asks the crowd to “Make some noise!” which, of course, it does. Call and response is tonight’s mating ritual and it’s everyone’s responsibility to bring things to yet another climax.

The show is so relentlessly energetic that the politics of a song like ‘Empire Tags’ – “When we gonna get our new flag?” – washes over us without quite breaking into meaning. Backed by a live band and long-time fly girl Jane Tyrell, who brings a whole lot of Mary J Blige soulfulness along, tonight Urthboy’s agitprop hip hop is less about heads and more about hands in the air.

There are several touching moments. Like when Urthboy announces his impending fatherhood: “This will be the last gig with no Dad jokes”. Or when he raps on ‘Orphan Rocker’ about Parramatta Road while we’re all standing on it. And when Jimblah and Solo bound onstage to guest on ‘On Your Shoulders’, Solo’s verse, particularly, cuts through like a knife through butter. “Still it’s funny / Trying to appease the guilt and worry / That comes from sunny living in the land of milk and honey”.

Milk and honey that hasn’t come so easy for the Rule brothers.