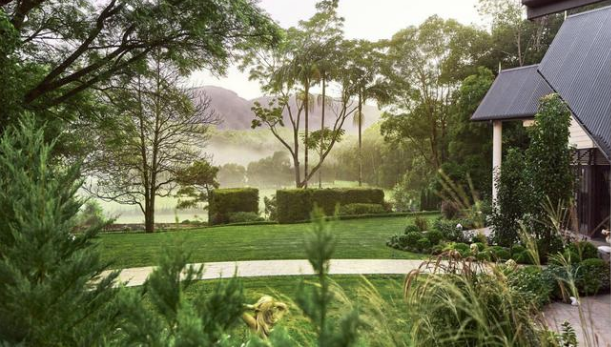 Valley of the god

First published in The Australian, July 2020

The ‘paparazzi free’ hashtag on Hermes Estate’s Instagram page is not ironic. The pre-COVID plan for this private retreat on NSW’s north coast was to entice international elites who’d be more dissuaded by a drone-operated camera than an $11,000 per night price tag. Originally slated to open in March and still faced with closed borders, Hermes Estate’s husband and wife team have swung open the crested iron gates anyway, hoping to lure an affluent Australia-based clientele.

The name bears no connection to the French high fashion label but rather to the Greek god. Hermes presided over many good things but primarily travel, wealth and hospitality. That hospitality begins with our car valeted by the be-suited butler who pops promptly back to pour us a glass of Dom Perignon, which turns into the whole bottle as we tour the grounds.

Three years and $6 million later, villa renovations are complete, though a few flourishes are pending including an infinity pool, a helipad, paging buttons to summon the butler, a full kitchen garden and the maturing of the baby fruit-tree orchard. It won’t take long; green things grow fast around here. For 20 years the five-acre property was called Seventh Heaven, owned by a spiritual healer of the sort you’d associate with Bellingen’s hippy chic (the town is 13 minutes away). The healer’s house was preserved with its two separate sleeping wings but the interiors were redone, requiring several imports of luxury furnishings from Europe and America.

The ceilings sparkle with Swarovski crystal chandeliers and the floors glimmer with gold dust encased beneath a burnished epoxy finish. There are silk rugs, silverware engraved with the Hermes crest and a bed so high and plush you need a leather footstool to get in. Book boffins will delight in a library of antique first editions set amid dainty marble busts of illustrious writers and musicians. Pianists, meanwhile, can tinkle at the same grand piano that neighbour David Helfgott regularly comes by to play.

Despite the bespoke experience, with both a chef and a butler at your exclusive disposal, money can’t buy the best part: the location. This Glennifer valley stayed green even during the drought and the sub-tropical rainforest down by the Never Never River drips with lushness. In warmer months you can swim here but we opt for a moonlit soak in the Jacuzzi instead. The butler has set down candles to steer our passage through the garden and we enjoy a nightcap while marvelling at the mist billowing across the escarpment.

By day, multiple weather patterns drift in and out of this changeable valley, each framing the mountains differently when you gaze out. Which you do a lot given the preponderance of glass doors. Our chef is from the Brittany region of France and somewhat shyly talks us through the personalised menu, including a dessert of sweets and pastries simply called ‘France on a plate’.

Few of the new trees planted are natives but 162 species of birds occupy the region’s sky anyway. A lone sea eagle soars and dips while the mournful calls of Black Cockatoos are frequent. There’s the occasional koala visitor as well as wallabies, rainbow pythons and possums. European by design but still – Australia, on a plate.