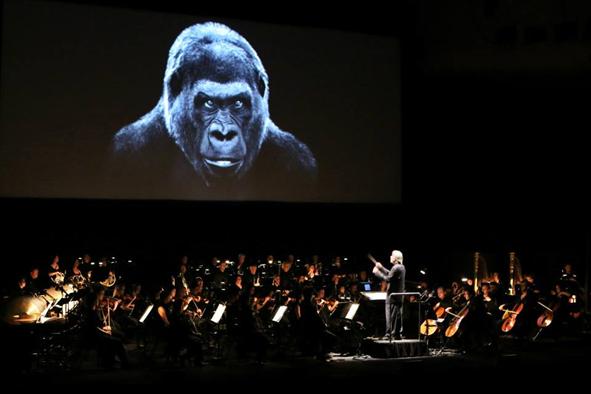 Glass and Reggio’s most famous collaboration is the stunning Qatsi Trilogy, which began with Koyaanisqatsi in ‘82 and ended with Naqoyqatsi two decades later. I loved those movies in my uni days though I conflated them in my memory with Ron Fricke’s Baraka (Fricke was the trilogy’s cinematographer).

Visitors is a black and while film of mainly barely-moving faces, usually just one on screen at a time – children, different races, both ordinary and startling faces – staring intently at us. In a Fairfax interview, Reggio explained the idea as such:

“’I look at it as a reciprocal gaze … having someone as the subject of the screen who is engaged with you, where you can actually see that person’s gaze, the reciprocal gaze triggers the internal dialogue. … That is its intention.”

Yet an hour in, the only dialogue triggered internally in me is between my bladder and my brain and, while this is hardly Reggio’s fault, lesser films than this have provided more distraction from calls to nature. Glass’s score is little help in not once flexing the muscles of the mighty SSO.

The film begins and ends with a gorilla’s face, a frame that wants very much to resonate as poignant commentary on … on what? The parallels that first spring to mind are bleedingly obvious but if Reggio had something of more oblique sophistication in mind, it is lost on me. (And I’m so into primates I travelled for days on fetid African buses to the border of the Democratic Republic of Congo to belly-crawl through the jungle to see a wild chimpanzee called Ferdinand. I’m all ears Reggio – what’s with the gorilla?)

If his goal were to make a film that defined the word ‘ponderous’, I’d have given it a standing O. The long slow pans of misty swamps are especially guilty. The scenes are gorgeous, true, but the loooongess and sloooowness and saaaaaameness of the speed of each pan grinds down my edge of productive irritation, lulls my critical senses to sleep and leaves me wearily bamboozled.

Heavy-handed yet message-less, full of intention yet empty of vigour, did a single spontaneous idea evade Visitors’ cutting room floor? ‘The Making of Visitors’ – now that I would watch, as the film’s creators chin-stroked anything forceful or climactic or suspenseful out of existence.

Two women sum it up in an external dialogue in the toilet afterwards.