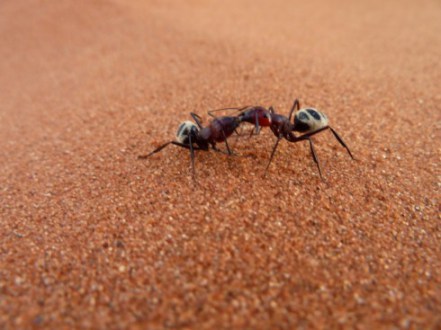 First published in The Sydney Morning Herald, May 2012

This is not how I imagined my Namib Desert tour would begin. Myself, three Germans and an English couple are held captive in our guide’s Land Rover as he flips through a booklet of disturbing aerial photographs of the yellow sand dunes we’re here to see.

The car is stationary, poised to cross the Swakopmund River. It’s not clear when the tour will resume, at least in a locomotive sense. It appears first we must learn some facts about the vast ocean of sand before us that in December 2010 became part of the largest national park in Africa and the eight-largest protected area in the world: The Namib Skeleton Coast National Park.

The controversial new ‘mega park’ gulped up Namibia’s entire 1,570 kilometre coastline, from South Africa to Angola. Within its borders is the world’s oldest desert (the Namib), the world’s highest sand dunes (the red dunes in the south) and an eerie clay pan featuring 900-year-old desiccated trees (the Dead Vlei). This extraordinary desert’s most recent claim to fame is that Mad Max 4 is being filmed here after the desert-scape near Broken Hill – the film’s original location – exploded with flowers after unseasonal rains.

But all is not well with the dunes. “The surface structure is so delicate that if you drive across them, they’re broken for life,” says our guide Chris Nel in urgent tones. “The tracks on the dunes are permanent.”

Nel is a nimble, charismatic white Namibian with an accent suggestive of the Afrikaans and German he speaks fluently. The photographs he shows us depict the zigzagging tracks that blemish the entire Namib Desert. “These are ox wagon tracks still here from a German expedition in the 1880s.” He pauses.  “The 1880s.” I feel breathless in the increasingly stuffy vehicle. Another photo. “These are car tracks that have been here since I was born.”

Bring some famous rugged coastlines to mind – California’s Big Sur or Cape Town’s Garden Route. Beauty, exclusivity, and property prices spring to mind. It’s the dream of an environmental zealot to imagine any of these nations would dedicate their entire coastline to national park. It’s no surprise Namibia is the first country to do it.

While the announcement thrilled conservationists, policing a national park this immense is expensive. And Namibia is poor. A growing premium, however, is being placed on conservation projects to stimulate tourism – one of Namibia’s fastest-growing sectors.

And what do tourists come to Namibia for? The almost unfathomable sense of space and isolation marked by stark sculptural scenery. There’s only 2.1 million people living here meaning there are, on average, fewer than six people per square mile.

Nel says the tracks on the desert these days are mainly from unlicensed quad bikes. Swakopmund (the tidy German-influenced town closest to the yellow dunes) has featured in the Guinness Book of Records for 10 years running for the dubious honour of having the most unlicensed quad bikes per square kilometre.

As our bleak lesson progresses, my guilt grows. Right now my husband is somewhere in the Namib, hooning around with several other thrill seekers on a quad biking tour. The same bikes that slice off lizard tails, I discover. I confess to his sins. “Don’t worry, it’s the locals doing the damage,” says Nel. “And the South Africans. Six years ago, South Africa passed a law to stop quad biking but told its people ‘Don’t panic, Namibia has more’. They load their bikes onto trucks and come here. It looks like the great wildebeest migration in the Serengeti.” Namibia only won its independence from South Africa in 1990. It must be galling to still feel like the bullied little brother.

We rev up one of the yellow dunes. From the top we can see the Skeleton Coast where the icy, grey Atlantic Ocean laps the shores of the desert. It’s a weird sight. Once over the dune, we’re lost in thousands like it, undulating yellow sand as far as we can see.

The sky is grey with fog. No other desert is enshrouded by cold fog every morning – a result of the dunes bordering the Atlantic. The consistent micro droplets of fog ensure life continues, even though rain rarely falls. The other puzzle piece is the ‘east winds’ that blow in a curious mix of grasses, roots and seeds, some from the Kalahari Desert. There’s blackish tangles of it tumbleweeding along the base of the dunes. This stuff kicks off the food chain from the beetles who eat it neatly on upwards to the falcon and the jackal.

But where are all the animals? The dunes seem utterly barren, utterly lifeless. Where are ‘the little five’ the brochure promised?

There’s a long history of outsiders coming to Africa to tick off ‘the big five’: lion, leopard, elephant, rhino and buffalo. While tourists these days point cameras, the popularity of the big five dates back to the years of game hunting when foreign luminaries like Hemingway jaunted to Africa to point and shoot their rifles and, in doing so, embody some of the continent’s mythical wildness.

It’s true the big five are thrilling beasts to see. I’m touring in one of Africa’s overland trucks and have enjoyed several exhilarating safaris. But for me, unease nipped on the heels of excitement after the animal fled and the adrenalin faded. I’m wary of tourists with large zoom lenses and expensive sandals, able to reel off all the animals they’d seen but unable to name a current or historical Namibian figure of note. I don’t want to be pigeonholed as another white tourist in single-minded pursuit of Africa’s big five. There have been enough of those already. But when we arrived in Swakopmund, safaris were off the agenda and action sports were on. Left cold by the idea, I saw Nel’s pamphlet advertising the ‘the little five’ tour: snake, spider, chameleon, gecko and lizard. I warmed to the playful jab at the ubiquitous ‘big five’ and booked immediately.

While they’re barrelling over the surface of the sand, we’re discovering what lies beneath. Nel drives along tracks already etched in the dunes. We skid to a halt at the foot of an immense dune and he is off and running. I’ve noted his inclination to dart off without warning and start burrowing in the sand but this time, I follow. Last time, he excavated a delicate Namib Dune Gecko so transparent we could see its ribs. This time Nel has divined a spider door. He calls his tracking skills “reading the bushman paper”.

The Dancing White Lady spider is tiny, albino and very fierce. It lives beneath a silken arch in the dunes. Cornered, it leaps forward, pirouetting. When geckos attack, the spider cartwheels down the sand dune at 44 revolutions per second, effectively disappearing before its prey’s eyes. At the bottom it wards off other predators by hypnotising them with a swaying dance. Next, we see a Sidewinder snake, undulating (sideways) towards a bush for cover. We follow but it slips beneath the sand, miraculously fast.  It pokes its black tail up from the sand, mimicking a silverfish to tempt lizards so it can pounce on them.

The blind Fitzsimon’s Burrowing Skink quivers like  mercury freed from a thermometer when we catch one. It’s beautiful. It’s supposed to have a bright blue tail but none have tails anymore. The quad bikes rip them off. A Namaqua chameleon is our next discovery, its bulbous eyes swivelling independently of each other. Within a minute the white chameleon has turned black meaning it’s either nervous or furious. Or both.

Nel takes us to a special high part of desert where the dunes’ windblown creases are streaked by colourful crushed minerals. The dunes “walk”, says Nel, “in the direction of the south west wind”. This bewitching, changeable geography is coloured red (ruby and garnet), white (quartz), black (iron oxide) and silver (mica).

Driving back to Swakopmund, sun angles through the window onto my clothes, which shimmer with mica. A truck hurtles by with an ungainly pod of quad bikes roped to the back. I think of the blind skink; that glossy, wriggling thread of quicksilver, with a blunt stump instead of a bright, blue tail.