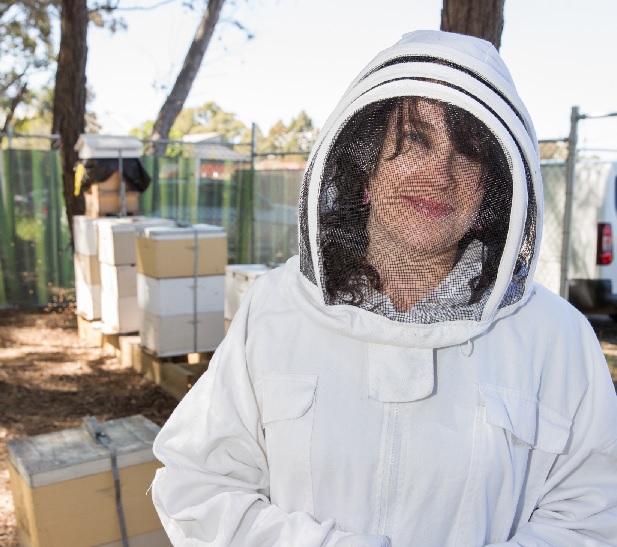 What We Learnt When We Visited An Urban Beehive

By the end of my visit, Doug Purdie’s face is transformed. He’s been stung and has puffed up but given the Urban Beehives co-founder has been bicep-deep in a bee colony I suppose that’s not surprising.

“It’s been such a damp week and it’s been really tough for them,” Doug says, picking a sting out of his eyebrow. Before he became a beekeeper, Doug says “All I knew about honey was that I put it on my crumpet”. Now he understands bees’ importance, he wants to share it. Worker bees regurgitate nectar they forage during the day into honeycomb holes. At night they breathe air over it, which dehydrates it to less than 20% water content: this is honey.

Bees fly up to three meters above the ground and because humans don’t typically stilt-walk to the supermarket, bees can be kept in residential areas without anyone knowing. Bee only fly a maximum of eight kilometres from their hive, so if you do happen to see one, it’s definitely your neighbour.

A New South Wales coronial inquiry was held in 2000 after a death in Sydney from a bee sting. The verdict was: “Fatal reactions are rare.” The inquiry concluded: “Including the recent tragedy, there have been only two recorded fatalities in NSW from bee stings from bees in managed hives over the last 50 years … community concern over urban beekeeping is much broader than an analysis of risk to human life indicates.”

To put things into perspective, it is said the likelihood of anaphylactic shock from a sting is less than getting struck by lighting twice.

Without bees, we’d be a population of carb-loaders

Bees pollinate around 90% of our nutritious food. That includes nut trees, most fruits, and even vegetables such as lettuce. Cotton and the hay we use to feed stock need pollination too, which means bees are essential to our clothes and leather shoes. Grain, however, is wind-pollinated, so yes: we’d have bread without bees.

Urban honey is very diverse due to the range of flowers available to feed on. The inner western Sydney suburb of Marrickville, for example, has a large percentage of Greek Australians and lots of backyard lemon trees. Thus, honey from Marrickville hives tastes like citrus. And so on.

Australia is the only country with no Varroa mite

Also known as the Varroa destructor (due to its ability to wipe out entire colonies) experts believe it’s only a matter of time until the Varroa mite sneaks into Australia in shipments through our automated ports. So enjoy honey by the ladleful while you can – but don’t waste it. In their busy, buzzy lifespans bees create just one quarter of a teaspoon of honey.

Bees live in a democracy

Did you know bees communicate via pheromones? It gets better: their societies have evolved into sophisticated democracies. One bee will visit a floral source and return to the hive. Meanwhile, others visit different flowers and return with different nectar. Back in the hive excitement over the nectar’s relative merits is expressed by the ‘figure eight’ dance, which is essentially a vote on which flowers are the most popular for the next group outing.  (Read Thomas D. Seeley’s ‘Honeybee Democracy’ for proof.)

Honey is a healer

Honey is complex and there is still a lot to learn but we do know it’s been used for a long time as medicine. “There are Egyptian hieroglyphics of an operation going on and there is a beehive depicted in the corner of the theatre,” Doug says. Honey has antibiotic properties, especially ‘active’ honeys like Manuka, and it’s also great for coughs and colds and possibly even gut health.

Life of a drone

The sum of a male bee’s life (called a drone) is flapping around in what’s called the drone congregation area, waiting to mate with the Queen. But it’s not all fun and mid-air sex. Drones only live 40-50 days, they can’t sting anyone and after mating with the Queen their penises snap off straight away. “You can hear it break off,” confirms Doug. Oh, and then they die.

Unlike the drones and female worker bees, a Queen bee can live for years. She is born from the same egg as a worker bee but fed royal jelly until she becomes genetically different. A Queen lays up to 2000 eggs a day and produces a distinct pheromone which means that if she’s removed from the hive, her bee subjects know she’s gone and fly out to find her.

You can have a beehive (pretty much) anywhere

Urban Beehives has 100 hives across Sydney, including in a heavy machinery lot near Mascot Airport where the weeds around the airport provide an excellent forage source for bees. There are rules to keeping bees, however, so if you want to learn more, you can do a course or join a bee club to find out about local regulations. Find out more about native Australian stingless bees here.

Qantas has collaborated with Hank’s Jams and The Urban Beehive to install 10 beehives on the Qantas campus in Mascot. These hives will be home to 800,000 bees. Soon, customers travelling in Business and First with Qantas will be able to sample rich, local honey from the Qantas Beehives. Qantas is one of the first companies outside the restaurant industry to install beehives and harvest honey for use in its own business, aiming to fight the current global bee epidemic.