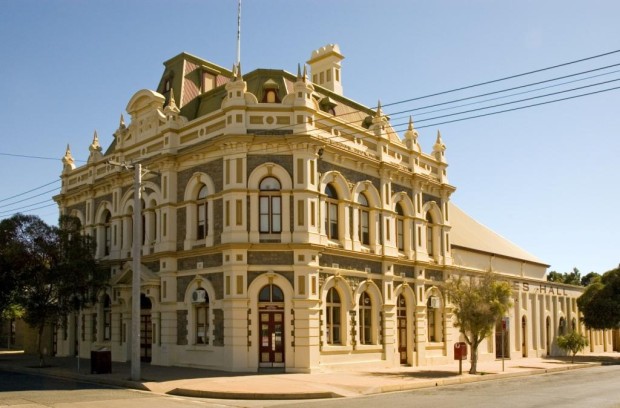 Rights we take for granted today – like a safe workplace, compensation and a 35-hour week – were topics of bitter industrial dispute in Broken Hill in the early 1900s. Kate Hennessy talks to a local whose father was always on her mind “when the whistle blew”.

From 18 to 62-years-old, Margot White’s dad was a miner in Broken Hill. When he first went underground in 1914, mining was an extraordinarily risky job. The philosophy of companies like BHP, says Margot, was “if you fall by the wayside, there are plenty more to take your place.”

Today, the Miners’ Memorial looms over town on the line of lode. It is a sobering stroll to say the least, listing the names of more than 800 men alongside their cause of death. “Smothered by slimes”, “buried in ore” and “caught in machinery” appear a lot.

When an accident happened, a whistle blew. “Mining communities are different to cities or farming communities because of the constant thought: ‘Dad might not come home’,” says Margot. “A lot of women were widowed multiple times. A whistle would blow and they’d rush up and say ‘Is it my man?’ It was always on my mind when that whistle blew.”

For many who survived the perils underground, lung disease awaited, caused by breathing in dust. As a girl, Margot says pneumoconiosis sufferers were easy to spot. “They were bent, thin as posts, pasty and jaundiced, coughing all the time. You’d say ‘that man’s dusted’.”

Bitter industrial clashes in 1892 and 1909 rocked the town. “No other Australian city has endured the industrial strife of Broken Hill,” reads a pamphlet at Trades Hall, the heritage-listed building that’s been home to the city’s labour movement since 1905. It was the 18-month lockout of 1919-1920, however, the longest in Australian history, that saw tides turn the way of workers.

The unions’ central claim was that conditions underground were disastrous to health. And when a humble x-ray machine arrived from Sydney to prove their point, mine managers started giving ground. Common-sense measures were implemented, such as ‘no man underground when firing explosives’ and, later, improvements such as protective clothing and sprinkler systems to water down dust.

The most widely-reverberating victory, however, was the 35-hour week. Until then, men could be compelled to work a 72-hour week with their employer’s stance: “Work under our conditions or don’t work at all”.

The amalgamation of unions into one governing body – the Barrier Industrial Council – followed, with the new conditions enshrined in Broken Hill’s unique and pioneering Workers’ Compensation Act. “Before that, if you were injured it was ‘no work, no pay’,” says Margot. “It was only through their solidarity that workers found the power to fight their powerful employers.”

Woman in a man’s town

Margot’s dad, Cecil, mainly handled timber underground. “I’d dig out his hard wood splinters with a darning needle when he got home.”

While the job was tough, “camaraderie and mateship was strong”, says Margot. “Nicknames were worn as badges. Dad used to talk about a fella called ‘Singlet’ – always on his back. And ‘Bent Legs’ who looked like he was dried over a barrel. You’d hear about Drongo, Dingo, Whacko and Jacko.”

These days, Margot does the free city walking tour during which she also tells tourists about her mother, Nadya Edes, Broken Hill’s first female councillor and featured on a plaque as part of the Heroes, Larrikins and Visionaries walk.

“When she was approached about that she said ‘I’m certainly not a larrikin, I don’t consider myself a hero, but I am a visionary.’ My mother was a feminist who believed women with the same qualifications should be paid the same wages as men. She only stood five foot tall but she made her voice heard in what was a man’s town.”