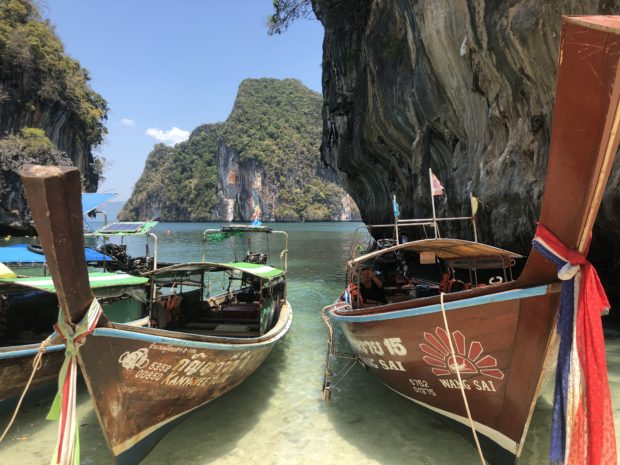 The shoreline is tinkling. It’s snapped-off coral, tumbling in the breakers, thousands of porous pieces colliding. As nature-based aural experiences go, the chiming waves of Koh Hong are up there. It’s the highlight of my day exploring Thailand’s Andaman Islands. Despite the cliffs that erupt from the iridescent water and the jungle’s cooling thickets.

We are travelling, you see, in a traditional Thai longtail boat with a very loud motor. The boats are all party at the front, business at the back. The prow is an elegant curve of timber; the stern is where a second-hand truck engine is mounted, constantly leaking oil, looking like a survivalist Mad Max hack.

No mufflers. No exhaust filters. No ear muffs for the guy who steers. Visually, the day is heaven; aurally, it is hell. Yet on the tourists go, uploading photos with the crowds cropped out before their towels have even touched down, hash-tagging them ‘tropical paradise’.

At Paradise Island, I sulk in soggy swimwear in a cave, watching the duplicity unfold. Judging by how breezily their kaftans billow, I doubt those lining up to pose on a rope swing have even swum.

Earlier, we’d been stuck in a logjam of longtails as a larger boat disgorged about a hundred people, dressed in all white. The dock rocked with their weight, forcing them into a vigilant waddle down its length. But, hey, I’d waddled too. And I am part of the problems of noise pollution and over-tourism as much as they are. Hauled around the sea

Being hauled noisily around the sea that day I felt every inch of the hunk of tourist meat I was. My culpability was ear-bleedingly obvious, which is sometimes good to remember. Because as a frequent flyer my lifestyle is already hampering efforts to stem the climate crisis. That truth is intangible though, especially with a plush neck pillow and a box-set to devour on board.

Or is it? Plenty of apps and websites can help. My seat on the 7,600 kilometre flight from Sydney to Bangkok was responsible for 1.4 tonnes of carbon dioxide. Had I flown first class that would’ve tripled to 4.2 tonnes. In May, flights in the UK hit a record high of more than 9,000 planes on the same day “schoolchildren around the world [staged] a climate strike”.

Even if you offset the carbon, your flight adds to noise pollution. In 2016, The Conversation cited research showing increased risk of blood pressure, heart attacks and strokes corresponded with higher traffic and aircraft noise. “In the UK, reading age [in children] was delayed by up to two months for a five decibel average increase in aircraft noise exposure,” a study found.

My first experience of over-tourism was in Venice in 2008 where I encountered group tours that moved with the agility of hardening lard. Daytimes in Dubrovnik were bad too. Evenings were OK, after the cruise-ships left, but by then the city’s staff was sapped and surly.

I don’t recall thinking I was part of the problem. Arrogant, really, but as a species evolved from chimpanzees, we do tend towards ‘us and them’ divisions. I’m still doing it in Thailand. “They’re like the Fyre Festival people,” I say of the boaters in white. Classic us and them mentality, right there. But evidence of over-tourism is really starting to smear travel’s rose-tinted glasses. An airport slated for Macchu Picchu. Locals in Barcelona branding Airbnb a ‘pestilence’. The snaking queue to Mt Everest’s summit. Figures are plentiful however McKinsey & Company’s report from 2017 can be expressed in a single line: “Some destinations are in danger of being loved to death”.

As a tourist, you might think you’re the victim, but you’re not. You’re the perp. “Over-tourism is not when the tourism experience is taken away, it’s when the community’s experience is,” says the CEO of Ecotourism Australia Rod Hillman. “That varies depending on what’s important to that community. Is it parking? Getting a table at a local café?”

I upload my Andaman Islands photos a few days later. The engine’s roar is history so I don’t mention it wasn’t exactly the #tropicalparadise my photos depict. Robert Smith sang it right in 1989: “I’ve been looking so long at these pictures of you/That I almost believe that they’re real.”

In retrospect, that was dishonest. I’m a writer, not a photographer, and writers must use their ears too. As Jac Taylor, editor in chief of TheTravelTen.com, says: “Travel writers see more of the environmental change happening so quickly all over the globe than most.” One positive trend is our industry’s obsession with insider tips – rarely places such as Santorini or the Cinque Terre, obviously. But it’s not enough. While we don’t have “too much of a problem” with over-tourism in Australia, says Hillman, “if you do the Great Ocean Road, Blue Mountains or the lighthouse at Byron Bay, you’ll start to see some issues.” To qualify as real ecotourism, he says, it’s not enough to ‘do no harm’. “It also needs to be making the community and conservation better.”

Better? Ouch. How? Seek out and exclusively book places with robust eco-credentials, he says. Of Ecotourism Australia’s 500 certified companies, around 120 are accommodation, from budget to five stars. With privilege (a disposable income) comes responsibility and with global tourism producing about 8% of global greenhouse gas emissions, and growing fast, it’s the elephant hiding beneath your high thread-count linen.

The World Tourism Organisation forecasts international arrivals will be at around 1.8 billion people by 2030. Your children may be some of those travellers so teach them to ‘use their words’. Words such as “We want to book your lowest carbon offering” and “Will my itinerary contribute to over-tourism?” I’m at a fish farm on the banks of the Krabi River at the Muslim island of Ko Klang. Roosters strut across the mudflats and a call to prayer begins. A longtail approaches – silently. “It is ready,” says German hotelier and entrepreneur Wolfgang Grimm. He’s commissioned the boat’s conversion into a zero carbon-emitting ‘electric Gondala’.

Two travellers board and cross the river’s width. The boat glides through a gap in the mangroves and, when it returns, the passengers are raving about monkeys and a Kingfisher. They didn’t see dugongs or otters but presumably, in transport so quiet, they could’ve.

Grimm is proud. “We have today proved [the electric Gondola] is commercial,” he says. We’re staying at his Green Globe-certified resort, Anana.  The high-rise design is uncommon in a country where land is cheap and resorts can sprawl.  Anana’s 60 rooms are stacked, tastefully, over six levels and occupy just 400 square metres. “It encourages future developments to use less land,” says Grimm.

Opposite the hotel is a lush permaculture garden, where guests will forage for their own ingredients. A low carbon footprint, water preservation, limited plastics, fair wages and sustainable supply chains are part of Anana’s practices too. The coffee pods are filled with rich Thai Arabica coffee and recycled afterwards by a local dealer. Glass bottles are re-filled by staff.

There are a growing number like Anana. New luxury resort brand, SALT, is doing its back-end business (water, waste and plastic) but putting locals front and centre too. “Simply by staying, [you] contribute to empowering local communities as the hotel sources everything it can locally, creates employment and preserves the environment,” it claims. Writer and photographer, Kate Webster, stayed at SALT Mauritius. “The concept was so different and so honest,” she says. “I had dinner at a local home where I felt like I met my Mauritian momma.” Webster loves luxury but hates “the snobby feeling that comes with it” she says. “It was so refreshing to know they’ve nearly eliminated single-use plastic. Even the room keys are made from recycled plastic.”

Grimm knows his employees, as well as Krabi locals, must be ideologically on board, a challenge that requires long-term commitment. “The world doesn’t need me to grow food,” he says. “It needs me to communicate enthusiasm so people think ‘I can do this too’. Ecology is not management or knowledge, it is leadership.”

When Anana general manager, Warapetcharat Boonyarattanakul, interviewed for the role last year, she didn’t understand Grimm’s ideas. “I never did it before,” Boonyarattanakul says.

“When I see the garden, I say ‘this is something very good and different’. I made a decision on the spot ‘I want to work here’. You see the weather nowadays? Changed. It is crazy. It tells you our world is cracking. Like now, it’s never hot like this in March, the heat came so early. If people don’t wake up, our grandchildren are going to have a big problem.” On the drive to Krabi International Airport, power poles lean into the treetops, their cables hairy with vines. Banana palms fan out over empty buildings; weeds fill every crack. Nature moves fast in the tropics. Were we to disappear, our traces would depart places like this, soonest.

I think of TV series The Good Place (a metaphor for heaven).  The series was loved for how deftly it presented what it means to be a good person – not last century, or last generation, but now. And when Michael (Ted Danson) had this epiphany, I did too. “It’s not any harder to get into the Good Place than it was before; humans have just made it harder on ourselves to be fundamentally good,” said Michael. “Every day, the world gets a little more complicated and being a good person gets a little harder.”

The Good Place was billed as fiction. Is it, though?